Who hasn’t heard of Space Harrier?  It’s a popular SEGA arcade classic that (like most of Yu Suzuki’s many hits) seems to defy time.  Part of that stems from how cutting edge it was upon release – it still amazes me that this game debuted in 1985!  But much of its timeless appeal boils down to the simple fact that it’s just plain fun to play.

Like most arcade greats from the 80’s, Space Harrier had a large number of ports.  I’ve played and owned many of them, and while they were still plenty enjoyable, the tech simply wasn’t up to snuff to give a true arcade experience.  The mid 90’s would finally see this trend start to change, with ports to SEGA’s own console hardware (32X and Saturn) but they still couldn’t match the thrill of playing on an actual arcade unit. While the same can obviously be said about this 3DS port, I will say that it compares favorably with the best.  In fact, thanks to a bevy of options, it might be my favorite yet!

The various options really help elevate what was already a great game into something even better.  Difficulty settings, choosing the number of lives, a save feature, more continues, and the ability to replay beaten levels, make this the most accessible version of Space Harrier yet!  Like all arcade games designed to suck quarters it’s still plenty challenging of course, but casual fans will be thankful that they can tweak it to a more manageable level. 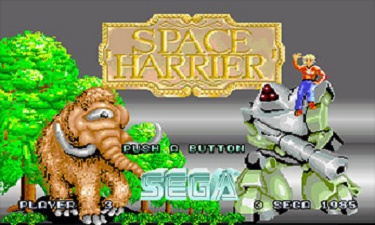 For the arcade purists, there’s options to love too.  Activating arcade cabinet noises is a small but welcomed touch that show M2’s efforts to recreate the arcade experience as close as possible.  Even better is how they’ve simulated the moving cabinet – once I started playing with the awesome effect on, I couldn’t go back!  Add in the options that will be appreciated by all such as selections for screen size, or being able to listen to the very memorable musical tracks, and you have a game that’s extended its already broad appeal. 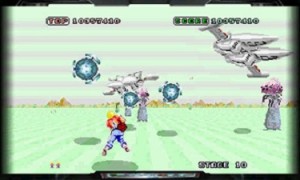 Visually this game continues to impress me.  It displays copious amounts of beautiful color, large scaling sprites, tons of onscreen activity, fast movement (don’t blink!), and a smooth frame rate.  The graphics have aged beautifully.  Flying through the varied sections of the ‘Fantasy Zone’ while shooting the iconic enemies and blowing up parts of each stage is still awesome, and with the 3D it feels more in my face than ever before!  While I can’t say I prefer it more than playing on a large screen, a better handheld implementation is hard to imagine.

As challenging as Space Harrier remains, you can’t fault the controls.  Not only can you invert them, and adjust the rate of fire (among other things) but M2 has even given the option for stylus play.  While I appreciate it, Space Harrier is really the sort of game where you want every inch of the screen visible though. The d-pad works well (it’s what most will be accustomed to) but the circle pad is a more comfortable and much better fit. 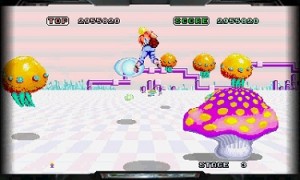 Playing Space Harrier puts me in an almost Jedi like state, where I can do split second reactions without thinking.  It’s an amazing sensation that all gamers should experience!  This 3DS version is a great way to do just that.  It’s a truly impressive port of the classic, and M2 deserves commendation for what they’ve done with it.  I can’t wait to try the other 3D classics – if they’re anything like Space Harrier, SEGA will have many happy fans!