Blast through the skies in your battle helicopter!  Another SEGA arcade shooter has been re-mastered by the devs at M2.  3D Thunder Blade is one more classic addition to the 3DS eShop. 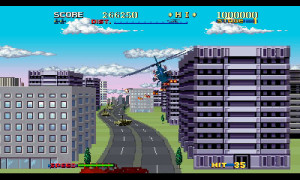 Lively action is the order of the day here.  Alternating between overhead and behind the back viewpoints of the copter keeps things varied.  The latter is definitely more impressive from a visual point of view, though the 3D seems more helpful overhead.  Gauging how close you are to the enemy fire is easier, and being able to zoom closer to the action is cool as well.  The two views also mean an adjustment period for the controls.  The copter has a feel its own (with adjustable speeds) and proficiency will take time, especially for those who’ve never experienced the game elsewhere.  I prefer giving the slip to the bulk of the various threats more than combating them.  The expected M2 difficulty options can help.  Circle Pad Pro support is included, though the game controls fine with the default setup. 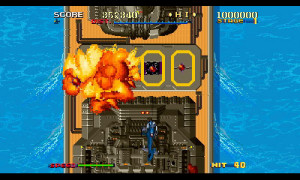 Afterburner was held back slightly by its more realistic locales, and I feel the same is true with Thunder Blade’s settings – no imaginative sc-fi imagery here.  This may be most evident with the bosses, who fail to make much of an impact.  The music also seems lacking compared to other SEGA arcade games.  For whatever reason things sound more dated here, whereas the others have enduring tunes.  Nevertheless I appreciate the audio settings that let me tone down the sound effects which would otherwise drown the music out. 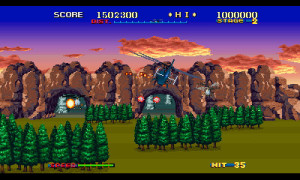 Deficiencies in content are Thunder Blade’s main issues.  The game has just four short stages, which are over before you know it!  It’s not to say the stages aren’t tough (threats obscured by the terrain are always a danger) or that there is no replay incentive (besting max scores) but they just go by far too quickly.  One slight saving grace is that you can unlock a new stage.  It fits very well with the originals, but it is just the one.  Other unlockable tweaks are comparable to the special mode seen in 3D Afterburner II. 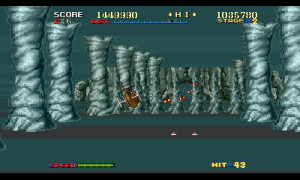 Even though this is a high quality release, 3D Thunder Blade can’t quite match the fun offered by the other Classic arcade games from SEGA.  Compared to them the content is a fair amount lighter, and lacking some extras found in other ports.  All the same Thunder Blade demonstrates both the care M2 puts into these remasters, and the arcade prowess SEGA had.  It’s enjoyable, as is every 3D Classic I’ve played.  Summer will bring even more of these games (from the Genesis library) and I’m looking forward to them!

An enjoyable arcade throwback.  Content is very light (sadly) but the quality is nevertheless high.