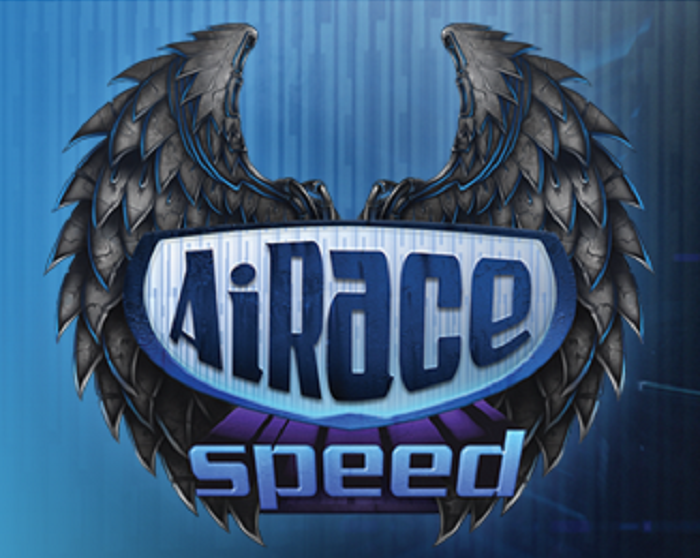 Qubic Games latest eShop title, AiRace Speed, is already well positioned for popularity with 3DS gamers.  Earlier entries in the series (on DSiWare) were critical and financial successes, so there is already a fan base in place for this new release that will probably download it regardless.  For those like myself though, having no experience with the prior offerings, it isn’t a question of how this game fares as a successor, but how does it stand on its own?  I’m pleased to report the answer is very good.

Even though this particular title was fresh and new for me, I do have some familiarity with Qubic Games work.  Gnomz for WiiWare, is one of my favorites for the service (download it if you haven’t already!) so I hoped AiRace Speed would offer an experience comparable in terms of overall quality and fun. 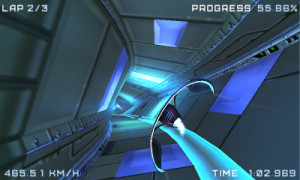 It certainly starts off strongly, with a snazzy CGI opening that’s pure eye candy.  In game visuals are pleasing too, with slick graphics that fly by almost too quickly to be fully appreciated.  Even though the bulk of the game takes place in cramped tunnels, there is some much welcomed use of color to break up the industrial shades of grey.  I also appreciate that an effort was made for some diversity.  The narrow tunnel sections frequently give way to wide open areas which, besides serving as a welcome break, are visually exciting with lots of background sights to try to quickly take in.  There are also multiple paths, providing further opportunity to take in additional sights, not to mention increasing replay value. It’s a sharp looking game that’s bound to please. 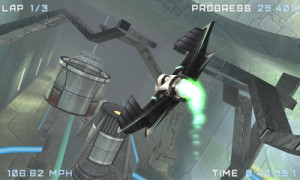 I rather enjoy the 3D effects too, as they provide nice depth.  While some eShop titles (and even retail releases) feel like the 3D effects have been shoehorned in, you can tell this game was built with 3D in mind from the outset, and the look is very satisfying.  Surprisingly, I haven’t found the game to be any less smooth even with 3D cranked to full, which considering how fast this game moves is very impressive!  I have been experimenting playing in 2D, but find that I crash even more than I do in 3D!  The one thing I need to work on though is the tendency to move during tight turns … it’s an very easy way to lose the sweet spot.  You’ve been given fair warning. 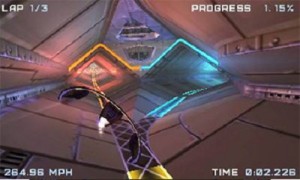 A racing game can look great, but will crash and burn if it controls poorly.  Thankfully I haven’t found this to be a problem with AiRace Speed.  You are given the option to race with traditional button controls (which you can invert if you choose) or try your hand with the stylus.  Touch screen controls actually surpassed my (admittedly low) expectations, working a bit better than I hoped for.   Still, I very much prefer using the buttons, and really for a game this fast and challenging I imagine it’ll be the best bet option for the majority.  The option to choose is appreciated however, and working with the stylus adds an extra layer of challenge with its learning curve.  Overall I think the controls are fairly tight … something I learned once I stopped mashing the gas, and started strategically braking.

And it’s a good thing they’re tight, since this game is a tough one.  It’s very fast, so crashes will come early and often when you first start playing.  Thankfully crashing will only set you back near the last checkpoint you passed … they aren’t really far enough apart to get too frustrating, but the distance is such that you’ll certainly be mindful of it.  Progress is shown as you race, displayed as a track completion % in the corner, and objectives that need to be reached to earn stars are displayed at the start of the race.  While bronze are easy enough, silver and gold are a real challenge, with near perfect constant nitro runs needed for the latter! 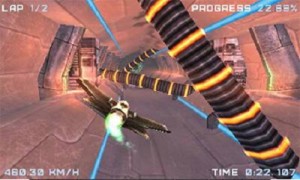 This challenge aspect really stood out to me, especially since our most recent print issue of PNM had a ‘Let’s Talk’ about game difficulty.   I’ve found this game’s high challenge to be frustrating at times for sure but (key point!) not to the extent that I haven’t wanted to come back to the game.  I know it sounds clichéd but the phrase ‘practice makes perfect’ really does apply here.  For those frustrating moments, I’d suggest try playing the levels without using nitro at first, for a still fast but more reasonable pace.  Explore the layouts, try out the different paths, keep an eye out for shortcuts, and sharpen your reflexes for when the inevitable difficulty spike happens. 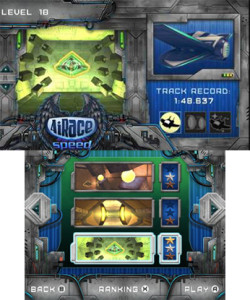 In my desire to write a review that applies to a broader audience, I will step out of my persona as a longtime gamer for a moment and say that a difficulty option would have been a nice inclusion.  Especially as the last few of the 18 tracks require a certain number of gold stars to unlock, some gamers will simply be locked out from accessing all the game’s content.  Difficulty settings limit alienation from both the hardcore and casual gamers.  One option that is supposed to help with the game’s high challenge is ‘Flight Assist‘.  I presume it’s meant to be just what it sounds like, although ironically I find I do better without it … much better actually.  Improved times, gold stars, new tracks unlocked, etc. …  It’s a nice idea but it seems to be executed poorly.

Besides all the racing taking place, there are occasional endless levels.  In these you aren’t given a number of laps to complete but lives instead, the goal being to see how far you can travel before crashing and exhausting all your tries.  I’ve enjoyed these levels quite a bit, and they serve as a nice break from racing and trying to shave precious seconds off your time.  Even though they don’t offer the same exhilaration that stems from coming within a pixel of smashing your vehicle, they have their own unique style of good fun.

AiRace Speed encourages replay both through earning achievements and online leaderboards (no multiplayer sadly) I’ve found the online leaderboards to be an especially good incentive.  It is embarrassing for me to admit however that, even racing against just the few who had prerelease review codes, I was usually at the bottom of the rankings. :( I found myself replaying levels over and over, improving my overall position so as to not bring too much shame on myself or Pure Nintendo.  The best was when I played a track that had no scores recorded yet.  For that one moment, I could honestly brag that “Trevor Gould is the greatest AiRace Speed player in the world!”  ;) 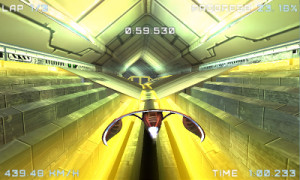 I’ve really been enjoying AiRace Speed, and feel I’ll continue to for some time to come.  With its impressive visuals, old school challenge, and strong replay value, AiRace Speed is a winner!  And at only $4.99, it’s a wallet friendly winner.  Download it today, and I’ll see you on the leaderboards.