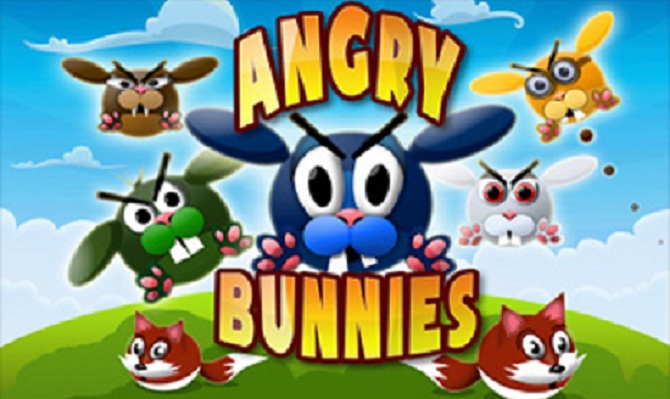 Angry Bunnies makes no secret of trying to successfully copy popular phone darling Angry Birds (which itself is no stranger to copy claims, but lets not get into that now).  It’s no wonder Angry Birds served as inspiration for Cypronia, given how popular the games have become.  They’ve grown into a true marketing juggernaut that can’t be ignored, even if it might be hard for those who only game on consoles and handhelds to understand.  Angry Bunnies, as is clear from the title, is quite similar to Rovio Entertainment’s flagship series.  In fact it’s so similar, it goes beyond a mere homage, and is dangerously flirting with outright ripoff!

Now this isn’t the first time Cypronia’s taken a popular mobile game and put their own twist on it. I enjoyed Cake Ninja which is basically Fruit Ninja reworked, and I also got some enjoyment out of Angry Bunnies near carbon copy gameplay too, at least early on. Which isn’t to say I can give it much of a recommendation … it has too many faults.  But the popular gameplay of Angry Birds still manages to shine through, in part, even in this cloned form.  So let me shake the dirty feeling that I’m playing some kind of bootleg fan hack long enough to share my review of Angry Bunnies … 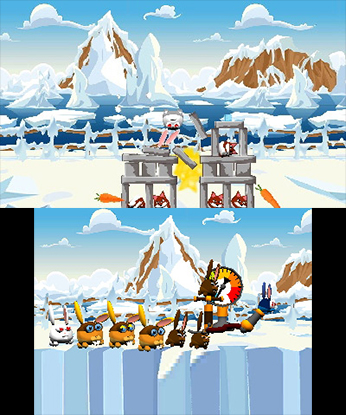 Angry Bunnies has no story, either in-game or even the manual.  It’s straight gameplay (physics-based demolition) that has you flinging a small selection of bunnies into varied structures  attempting to take out the foxes (replacing Angry Bird’s pigs enemies).  Different bunnies have their own unique abilities, although it isn’t entirely clear from the sparse instructions what they are.  They differ in colors and sizes but have no real personality to speak of, and I regret that more humor wasn’t shown from them.  It could’ve helped to give the game a bit of its own feel.

There is some very familiar but accessible fun that could be had here and, should you choose to stick with it, you’ll be kept busy for a while due to the trial and error gameplay spread over 150 levels.  Replaying levels to collect the three carrots scattered about adds to the game’s challenge and length.  In spite of the recognizable pick up and play nature, and replayability, the game is not without some pretty big issues …

One of my main concerns with Angry Bunnies is that a level can be done correctly, only to say you’ve failed (I’ll elaborate).  The detection is inconsistent, and an apparent lack of fine tuning leads to disappointing, and often frustrating results.  For example, when a large structure successfully collapses on top a fox (or when a bunny lands directly on one) and they don’t vanish, it’s peculiar to say the least (although comical seeing foxes wearing large boulders for hats!).  When the above results in a fox getting knocked back and forth like a wobbling weeble and they still remain, it’s even more peculiar.  Likewise explosions can trigger a chain reaction one moment yet do nothing the next, and whether it’s based on the triggering point or not seems just random.  Coupled with bunnies that can bounce and flip any which way (adding a bit of unintended humor), it’s overly difficult to plan when being left at the mercy of inconsistent physics, as even correct bunny placement doesn’t guarantee victory.  At least things work both ways though, as sometimes you’ll see a fox vanish or carrot collected without any apparent input, helping to balance the challenge, even if it’s a rather poor way to do so.

The limited soundtrack is another let down.  There’s an opening tune, and a brief snippet when you complete or fail a level, but no music while you play which disappoints.  It’s not a huge deal in and of itself, but when the audio efforts are focused primarily on the annoying yells of the bunnies, its absence stands out more.  The sound effects are glitchy too, as sometimes a bunny will be shouting “Owww!” over and over even while laying still on flat ground!  Again, a bit more polish would’ve helped.

The biggest fault in my opinion, is that sometimes you’ll get pegged as having failed before you’ve even finished a level.  It’s annoying enough finishing a level correctly and failing, it’s another to not even be given the opportunity!  When booted to the fail screen with a structure frozen in mid collapse, I have to wonder if the game was released prematurely.  If this happened once I could overlook it, but when it happens multiple times it’s earned my criticism.  Don’t fail me when I still have a fair opportunity to win!  If there is one thing that makes this huge mistake slightly easier to swallow, it is that it seems to be limited to just certain levels. 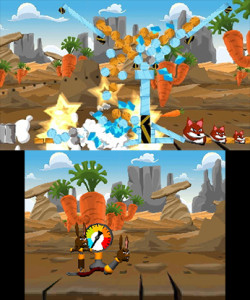 At least the game looks good, with very colorful backdrops that get nice separation when the 3D is actively lifting the foreground.  The artwork is pretty cute, and overall I think it’s an attractive looking game, even if it doesn’t take huge advantage of the 3DS hardware.  Touch screen control is fine too, so even though the physics are inconsistent, at least failure won’t result from inability to aim.

Angry Bunnies has set itself up for a trashing due to shamelessly being a blatant ripoff of a popular game(s).  Taken on its own however I think it’s fairly entertaining initially, thanks to the proven gameplay of Angry Birds.  Over time though, the deficiencies do become more manifest, and new ones are also introduced.  If you can’t get enough Angry Birds, you might consider checking this game out.  Perhaps it’s better suited to those (like me) who aren’t overly familiar with the Angry Bird series (I never played the games until last year’s 3DS compilation).  But for the asking price of $8.99, there isn’t enough on offer here.  The reality is, you can get Angry Birds games various places for a fraction of the cost, and they’re much more polished.  Angry Bunnies has too many issues to justify being overpriced, and also too many to make me rate it very high. 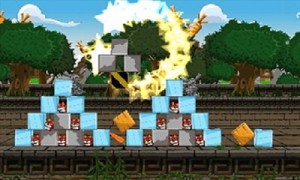 Perhaps the upcoming Wii U version will be better?  Or perhaps Cypronia’s other pending Wii U titles will have more originality and polish (I’m hopeful).  But Angry Bunnies 3DS is an overpriced clone, and while I got some enjoyment out of it, flaws and all, it’ll probably struggle to find much of an audience … except perhaps copyright lawyers.