Another World (or Out Of This World as it’s usually been called in North America) is a superb cinematic platformer that takes place in a sci-fi setting.  You play the part of a burgeoning scientist who, while running an experiment during a lightning storm, is whisked away to an alien world.  You’ll need your best platforming skills and puzzle solving abilities to take on this grand adventure, which was recently released as an Anniversary Edition for both the Wii U and 3DS.

The story is played out through the memorable opening, and cut scenes played during the game.  Though essentially linear, Another World largely leaves you to your own devices to discover everything it has to offer.  As soon as you gain control you need to out swim tentacles trying to drag you to a watery grave, kick hostile and deadly leeches, and try to outrun a beast looking to tear you to pieces.  Death comes often, even within these first few minutes!  In short though, you’ll acquire both a simple weapon and an alien companion to aid you in trying to survive.  Beautiful but forbidding, the imaginative sc-fi settings make the constant threat of death somehow seem not as annoying.  Nevertheless patience a plenty will help you in tackling this games challenge.

There are times in Another World where you’ll need to display impressive dexterity.  Other times will require patient observations of your surroundings, as you learn from watching enemy patterns and observing obstacles.  Careful timing is always needed.  Some parts can really only be figured out through trial and error, with reasonable checkpoints and unlimited lives making them less bothersome than they would be otherwise.   Being able to select finished areas outright is a large improvement over the passwords of prior versions.  Frustration is sure to rear its head at times, but rest assured that immense satisfaction isn’t far behind.  There may very well be occasions when you feel you must consult a walkthrough.  I’d suggest doing so sparingly, or asking for spoiler free help on Miiverse.  Part of the joy of Another World comes from experimenting and exploration.  Walkthroughs will not only rob you of much satisfaction, but make the game seem too short.

Length as a concern should really only factor for those of us who grew up playing this game.  I’ve owned Out of This World on numerous consoles over the years, and know the game pretty much by heart.  Still, even for us vets there are some fun inclusions to lengthen the experience.  Three difficulty settings add a new replay element, and the highest setting especially will challenge seasoned players.  Imagine my surprise when previously squished leeches returned as I was trying to outrun the beast in the opening scene.  Considering that in the SNES version some didn’t even drop to the ground, it gives you an idea of tweaks that were made to the formula, and I appreciate it.  There are other examples that I won’t touch on here, but ultimately it’ll be worth beating the game at least once under each setting.

Visually this game is a triumph on multiple levels.  Its realistic animations, art style, and overall graphics were simply stunning in the early 90’s, and well ahead of their time.  The enhancements put in place here make everything look cleaner and smoother, while retaining the iconic beauty of the original.  Many backgrounds have improved, and the excellent lighting is a welcomed addition.  Being able to switch between the visual settings on the fly (at the touch of a button with zero gameplay interruptions) is one of the coolest things I’ve seen!  The nostalgic gamer in me loves being able to make comparisons, and it gives me an appreciation for how well these atmospheric visuals have held up over the decades.  Indeed in certain areas the details and textures of the original are surprisingly still superior!  No matter how you play it though, this is a beautiful game.

The music and sound effects contribute so much to the atmosphere of Another World – their importance can’t be overstated.  While the remastering of the original tracks is nice, the inclusion of the brilliant SEGA CD version’s soundtrack was a stroke of genius!  It ups the musical ante by scoring each scene of the entire game, and is easily the definitive way to play.  Sound effects, while not as prominent, are no less important.  The environmental sfx succeed in drawing you in to the alien environments, as well as providing some occasional insight with how to solve puzzles.  The alien chatter (the only speech in the entire game) is a near perfect complement.

My disappointments with Another World weren’t many, but there are some worth pointing out.  This release could’ve also included graphics and music from other console versions (I’d love to experience the SNES soundtrack and the amazing 3DO visuals!).  The game is also lacking some features found in other releases like the developer’s diary and so forth.  Some type of cross play promotion would’ve been appreciated as well – how about a discount if buying both?  Finally, the lack of stereoscopic 3D in the 3DS version is a missed opportunity.  With this game’s layered art style and background and foreground action, it’s not difficult to see how much the game would’ve benefitted from it!  Thankfully the ability to take the game on the go is a fair trade-off for the Wii U’s HD visuals, and I see no need to assign separate scores for both versions.

Nostalgia doesn’t totally blind me to some of the elements that others may find frustrating or dated about this game.  But I’ve always had a fondness for Another World, and the tweaks and additions in this version make it in many ways (arguably) the definitive release! This port may have missed its 20 year anniversary by a couple of years, but Another World (on either Wii U or 3DS) should be considered a must own.  Eric Chahi’s classic is an absolutely brilliant sci-fi tale rich in atmosphere, and needs to be experienced! 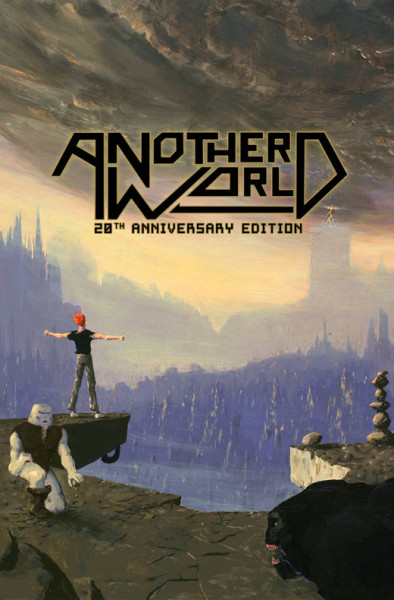