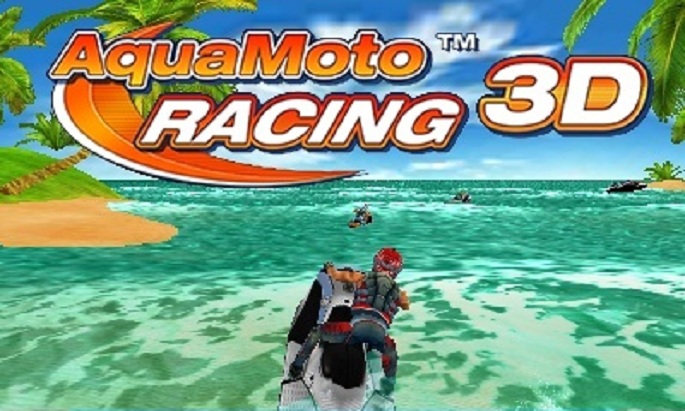 Aqua Moto Racing 3D is a great eShop download, that packs lots of fun content for a very fair price of only $5.99.  For the cost of a Subway meal, you get a great looking racer with plenty of tracks and lots of nice extras that’ll keep you playing.  I’ve been having a real good time with this game, and here are some of the reasons why …

Visually this is an outstanding looking game!  The graphics are sharp and crisp, and each course is bursting with lots of bright, colorful scenery.  There is good texture work, and the lighting effects are fine too, especially when you play with the very cool storm mode active.  Competing in the raging waters really shows off how sweet the 3D effect is with flashing lightning, on top of the bobbing waves, and rain flying at the screen.  It does the eShop proud! 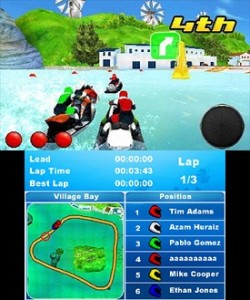 I did have some initial worries with frame rate, based on a couple of reviews I’ve read of the European release months earlier, but a subsequent patch must have fine tuned whatever issues existed prior. I’ve found everything to run smooth with hardly a hint of choppiness, even when racing against the max number of AI opponents.

With events taking place in various locations around the world there are some entertaining backdrops with nice little details that’ll likely take you multiple races to fully appreciate.  Besides a change in scenery, the varied course layouts are welcomed for mixing things up.  One race you’ll be focused on flat out speed, the next you’ll be carefully navigating around the buoys as tightly as possible to earn maximum turbo, only to move on to a course loaded with ramps to promote stunts.  This diversity encourages making progress to unlock additional tracks.

Control for the racing is tight and responsive, and I’ve had no struggles even when using the upgraded, very fast watercraft (of which there are several available to purchase as you progress).  I also think the wave physics are pretty good, which is obviously important for a game taking place on the water, and ensures there is no added burden placed on the controls.  I was initially very critical of the stunt portion of the game which utilizes touchscreen control that’s more appropriate for smart phones than the 3DS, since I hate having fingerprints on my system (there’s really no easy way to use the stylus).  Wisely though, there is an alternative method which employs the shoulder buttons and d-pad, and I for one really appreciate it.  I just wish it was as responsive as the racing controls.  I’ve found taps don’t always read correctly, resulting in the rider performing no stunt at all, or trying to pull off back to back stunts which often leads to a bad landing.  Both methods could use a bit of work, but the choice is very welcome nonetheless. 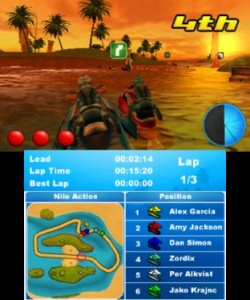 The stunt controls might be my biggest concern with this game, although I do have a few others.  The collision detection for one is slightly off, alternating from too forgiving to overly nitpicky.  I barely touch a buoy crawling at a slow speed and go flying off, yet I can crash through a building and barley miss a step?  Thankfully these occasional inconsistencies do tend to balance each other out, which makes them less bothersome than they could be.  Earning medals is another area worth touching on, in that it’s based on your fastest lap, not overall finish.  You could end a race in first place and only get a bronze, yet finish another at the back of the pack but still get the gold.  This is an odd setup, and I wish there would’ve been an option to allow for a more traditional approach.  In spite of this atypical choice though, the game’s still good fun.

Rounding out the core game are some nice extras, including multiplayer that requires only one copy of the game, plenty of achievements to earn and extend replay value, and even StreetPass support!  Inclusions like this highlight the effort that went into the project, and I appreciate how each one adds to the fun of this game

Aqua Moto Racing 3D is a very enjoyable, quality game, that does almost everything right.  With some tightened up stunt control, and more consistent hit detection, this could potentially be a true classic.  Even now though, the game is great fun and well worth downloading!