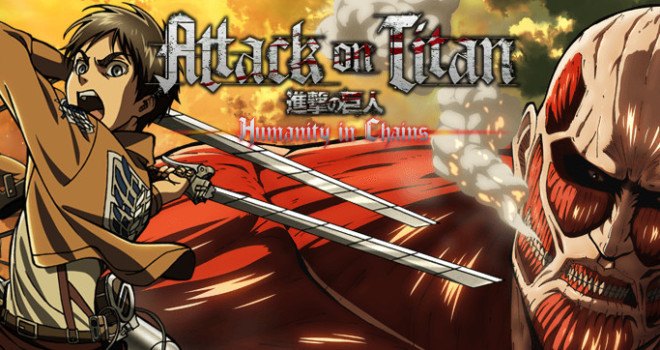 Aside from playing video games, one of my other nerdy pleasures is the bright and flashy world of anime. Now I’m not as hardcore as other anime fans, but if I’m given an interesting plot, developing and relatable characters, I’ll binge on a few seasons. I was first introduced to Attack on Titan through a parody simply called “Attack on Titan: Abridged”. Overall it was hilarious and for some reason, knowing nothing about the anime made it that much more enjoyable.

Through a friend, I finally got around to checking out the show and man was I not prepared! This anime is dark. Really dark. Every episode seemed to end with bloodshed, a character that you’ve grown attached to dying and humanity barely surviving to fight another day.

Seeing the characters zip around on their OMD Gear, slashing Titans left n’ right, it practically begged to be made into a game. Recently released for the Nintendo 3DS, Attack on Titan: Humanity in Chains gives us our first taste into the world of titans and let us join in the fight! Would this first installment of the popular anime give us the hope for future games or would it be eaten away much like a titan to a human?

The story mode follows through the first season of the show, broken up into five different parts featuring Eren Jaeger, Mikasa Ackermann, Armin Arlet, Captian Levi and Sasha Braus. I’m not going to go into much detail other than that, mainly due to spoilers of the anime.

Humanity of Chains is completely mission based and the objectives that you’re given overstay their welcome. If you’re not taking out a specific amount of titans, you’re resuscitating some soldiers, collecting things as pointless as armbands and running around in circles when trying to “retreat”. I say that with quotation marks, as its kind of hard to call the act of running around in the most awkward circle ever retreating. Instead, its like a game of “duck duck titan”. While its nice that a some of these missions can be finished in under a minute, it isn’t as satisfying as one would think.

Combat is fairly simple and if anything feels like a quick time event. When speeding towards a titan, a small circle will begin to close in towards a red circle and with careful timing, can result in landing a critical hit. You can also send your character in a spinning motion motion much like a helicopter which is great when trying to prevent a titan from grabbing you mid-attack. It was satisfying when approaching titans with a tactical approach, as they can easily grab you in the hopes of a quick snack.

While combat can be enjoyable at times, the controls can make things frustrating. In order to adjust your camera, you need to use the D-pad which absolutely kills the pacing. Something like this sucks the thrill and excitement of fighting titans, as I have to completely stop moving in order to check out my surroundings for oncoming threats or a better view of my next destination.

If you have access to a circle pad pro or have a New Nintendo 3DS, you can easily use the extra control stick for camera movements. I however do not have a circle pad pro and only have a 3DS XL so I was limited to the poor D-pad camera functions. A good example of a game using limited controls to its fullest is Kingdom Hearts: Dream Drop Distance that while supports the circle pad pro, delivers a satisfying experience when controlling a games camera.

After progressing through the story, you’ll eventually unlock “World Mode” which is a vast upgrade compared to the story mode, but not by much. World Mode will allow you to create your own avatar as you can take on missions solo or with friends. This is also where you can level up attributes, customize your avatar and upgrade your gear. While this mode gave me the opportunity to level up my character, I never felt like I was getting stronger and the reoccurring missions of kill some titans, save some soldiers, collect some things, felt like a missed opportunity to try something truly unique.

Visually, character models look like their anime counterparts and titans look like towering awkward naked beings from the depths of ones nightmares. But whats even more hideous, is the running animations of titans off in the distance. Titans move at horrendous speeds and look as though they go through some serious lagging issues making it look like they teleport from place to place. At first I thought this was an issue with my 3D turning on which already slows down the games frame rate, but the issue still persisted after switching it off.

If there was one thing that I liked about the game overall, it was the music. Tracks are pulled directly from the anime and can get you pumped up for the action that lies ahead. While we’re on audio, I couldn’t help notice something when selecting characters for missions. Characters spoke in Japanese and aside from the anime cutscenes, contained no subtitles. It was kind of hard to relate to my characters or understand what they’re going through when I’m not able to translate what they’re saying. All I can tell is that they’re loud, possibly mad, or maybe they just stubbed their toe. I wasn’t really sure.

At the end of the day, this game is really only something that I can recommend to the most dedicated fans of the show. Gameplay is exciting for a while but can come to a halt with poor controls. The World Mode can provide a brief reprise from the lacking Story Mode, but you’ll still be met with the same redundant missions. Hopefully, this was something to test out the waters for future Attack on Titan games and maybe the next one we’ll see on a console rather than a handheld.

Humanity on Chains suffers to greatly from repetitive missions and poor controls that do not compensate for older 3DS models.