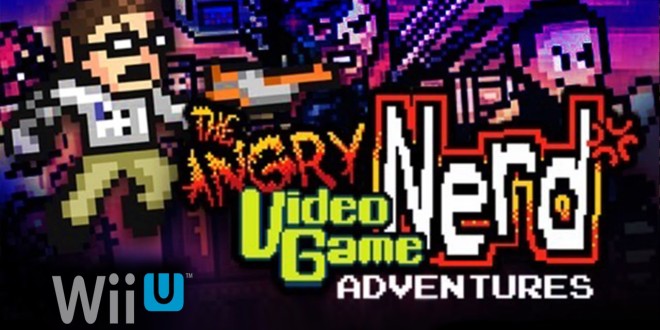 Way back before I first stepped into the world of journalism, I was like most gamers in college. I stayed in my room with friends and played video games, both old and new. One day, my friends asked me if I’ve heard of “The Angry Video Game Nerd”. This was actually around the time where I was still green when it came to discovering the vast distracting world of YouTube, so naturally I was curious.

The first video I remember watching was The Nerds review of Castlevania 2 Simon’s Quest. I distinctly remember this game as it was impossible, cryptic and above all, dated. Throughout the review, I began to establish a connection to The Nerd. If anything, it felt as though he represented our most inner nerd that speaks their mind and ultimately drop the metaphorical hammer on horrible games! The coarse language, hilarious commentary, pure nerdy gold!

Being a fan of The Nerd, its no surprise that I was excited when hearing about the release of his game developed by another fellow gaming site “Screw-Attack”. I remember when attending PAX Prime 2013, I had the chance to play the demo and It looked like something straight out of my NES. But this was just a demo, a taste if you will. How well can a game about some angry passionate nerd really handle? Let’s find out!

Our story begins with The Nerd and friends playing, you guessed it, a horrible old school game. Much like a bad movie/Saturday morning TV show from the late 80’s, The Nerd and company are dragged into the game itself. Forced to deal with instant death blocks, crap spewing monsters and pretty much every possible in game death hazard left and right, its up to you to get The Nerd out of this nightmare of a game, back into reality so he can go back to doing what he does best.

Now you might think “Well, it looks like an old school NES game, but does it play like one?”, the answer is yes! If I were to compare a retro platformer to AVGN Adventures, I’d probably have to go with Mega Man with a dash of Ghost N’ Goblins. The Nerd is equipped with an NES Zapper which acts as your main form of attack similar to the likes of the Mega Buster from Mega Man. Throughout your journey, you can find a brief upgrade to a Super Scope doubling the damage making some boss fights a thankful joke. Just know, that the second you take damage, you lose the power-up. This game will look for any opportunity to rob you of the slightest feeling of security.

But The Nerd is not alone in his endeavors. As linear as the game may be, going off the beaten path can reward you with not only the discovery of other well known Video Game YouTuber’s, but some new playable characters that might be familiar faces to fans of The Nerd. First off is Guitar Guy, whose guitar licks can phase through walls and is the fastest character. Mike Matei, who has not just a jump that rivals Luigi, not just the ability to see secrets but is armed with a lightsaber! Lastly, is Bulls#@t man. Armed with the power of, well, bulls#@t, he’s the slowest of the bunch but provides the strongest attacks and sports a double-jump. So I guess with all this said, its safe to say that we can add Super Mario Bros. 2 elements to the mix.

Platforming in AVGN Adventures is deliciously difficult that will leave you swearing at your TV, while laughing maniacally when achieving sweet victory! If bottomless pits don’t kill you, its the insane amount of “death blocks” that will be the bane of your existence. But don’t worry, as depending on your difficulty, you’re given a set amount of lives, health and continues. Easy grants you unlimited lives, Normal 30, Old School 15 plus 5 Continues. For this review, I chose the normal route and even then, I found myself continuing quite frequently adding my current death count to 338.

While AVGN Adventures reminds gamers of the retro days of old, what it lacks in, is length. Normal mode may have caused me to continue from time to time, but after some easy memorization and careful timing, getting through levels proved easy and I was able to make it to final world in about three hours. Its kind of a bummer knowing that the only thing that makes the game challenging, is less lives and frustrating enemy placements.

But in the end, while its length was a bit on the short side for my liking, my time with AVGN Adventures was enjoyable! One of the strongest factors however, is that even audiences not familiar with The Nerd can still find some enjoyment with some old school retro goodness. If you’re looking for a hardcore platformer featuring one of the crudest video game reviewers out there, then this is the game for you! AVGN Adventures is currently out for Wii U and will soon be released for the Nintendo 3DS.

While AVGN Adventures may be on the short side, it still provides a fun time even for those not familiar with The Nerd.