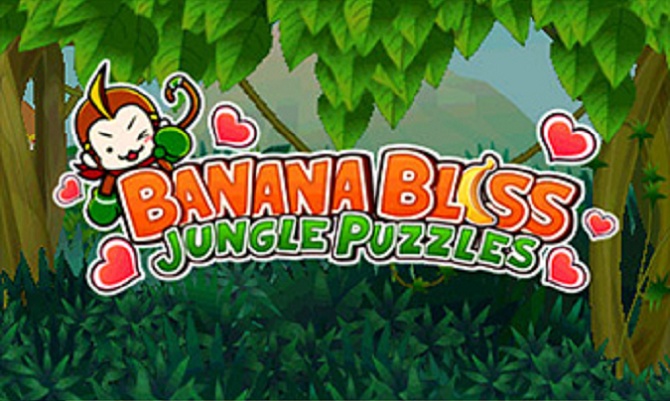 This new puzzle platformer has you playing as a love struck monkey named Morris, on a quest to collect scattered hearts for his girlfriend Molly.  You’ll also be looking for hidden bananas in each single screen stage, while avoiding a few enemies like snails and urchins which are usually deadly to the touch.

Various objects are gradually introduced over time to increase the games challenge. Fans will blow you around, springs fling you across the levels at great speed, boulders can be used as stepping-stones or to stop enemies, and there are a few others.  Challenge comes just as much from the level layouts as it does the enemies.  Dead end scenarios routinely threaten as Morris lacks the ability to jump.  Despite some trial and error gameplay though, the learning curve is gentle enough, especially with no time limit.  The means to quickly reset a level is also appreciated. 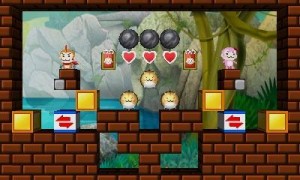 As an audio/visual package, Jungle Puzzles fares decently.  There’s a variety of pleasant music, and the lush jungle scenery in the background is colorful and pleasing to the eyes.  There isn’t a whole lot of diversity though, and with clunky character models and 3D that adds little, it’s clear things could be better.  For a puzzle game though, there’s more good than bad.

In terms of content, this game scores high with over 300 stages.  What’s nice is that, even though later ones need to be unlocked, you’re able to skip around if a certain one is too difficult.  You can even move between worlds, and this nonlinear approach is one I’m very grateful for.  Additionally, the game boasts good replay value.  Besides the bananas hidden in each stage, the game keeps track of your completion times.  I’ve found myself playing each stage multiple times to record fastest runs for heart collecting and banana collecting (the latter of which is saved via replay).  I do wish that you could earn medals or trophies based on your efforts though, and its omission seems like a missed opportunity.  But overall the replay value is still high. 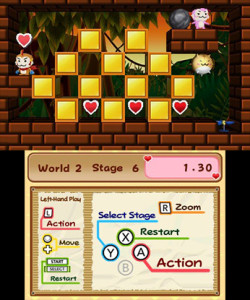 The short levels are ideal for quick play sessions when you only have a couple of minutes.  Having said that, I tend to play the game for longer stretches, which speaks to its addictive nature.  This is a refreshingly lengthy experience when compared to other Teyon games like the Bird Mania or Crazy Chicken titles, and should hold your interest longer.

There are a few things that I would like to see adjusted should this series continue.  I wish you had access to multiple profiles so that each player could keep track of their best times.  There are also some silly oversights like being unable to pause the game without hitting the Home button, or being sent back to the selection screen after finishing each stage (Why doesn’t the game just automatically move you to the next one?).  These are relatively small things, but they stand out due to the fact that the bulk of the game is generally well made and fun.  A bit more polish here and there could potentially turn a good game into a great one.

This is a very kid friendly release.  The monkeys are cute, the theme is collecting hearts for your love, and even the enemies can be avoided.  But there is enough here to appeal to adults too.  This would be a good download for families.  While there isn’t a great deal of variety or wow inducing stand out content, the fun gameplay has undoubtedly grown on me, and more so than I expected.  And it’s a great value at $3.99, especially considering the amount of content.  It’ll be a while before I completely solve every puzzle in this game, but having sunk several hours in already I can confidently say I’ll play it through to completion.  I can also confidently say that this is a download that’s worth your time.  Banana Bliss Jungle Puzzles is another good puzzle platformer for 3DS.