Bike Rider DX was released last month, but it wasn’t until a recent sale that I decided to take the plunge and download it.  Now that I have, I can’t help but think what a steal I got.  Simply put, Bike Rider DX is a fantastic game!

Some titles take a while before they start to grow on me.  Bike Rider DX is not one of them.  It won me over instantly.  The game’s beauty is in its simplicity.  From design to control, this is a game that you’ll start having fun with the second you begin playing.

The World Tour mode plays like a platformer as you try to successfully navigate to the end goal, and there is an endless mode (Grand Prix) that’s a nice inclusion also.  There are even some great extra stages to look forward to, with several new locations as unlockables.  As you navigate your biker through the game you’ll be jumping over simple gaps (to start) avoiding fellow riders and other obstacles, grabbing collectables, and picking up power-ups.  Is it basic stuff?  Sure.  But does it work?  Absolutely!  All the best platformers adopt these genre staples, and Bike Rider uses them all to its advantage. 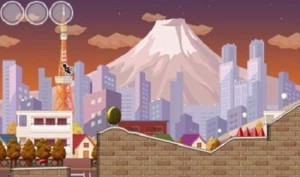 The collectables you’ll be keeping an eye out for are gold coins.  There are three per level that you’ll want to try to nab.  This isn’t exactly an original incentive, but again, it works well.  It’s actually a fine addition as not only does it provide a good challenge, especially in the later (and unlockable) levels where you have choices about whether to ride high or low paths, but it also encourages replayability.  Collecting enough of these coins will also give you access to more of the fun bonus worlds, so grab as many as you can.

Power-ups appear in the form of gems, and prove to be a fun addition.  It isn’t even so much for what they do (altering your bike) as it is the opportunities they present.  They can be a blessing or a curse, often providing assistance, other times handicapping you to the point of failure.  Even though they’re limited, they’re fun to experiment with, and having to decide in a split second whether to pick one up or try hard to avoid it leads to memorable moments of tension, reminiscent of classic NES platformers.

The stages introduce various new challenges over time.  Flat smooth surfaces will quickly give way to uneven ground.  More objects will appear on screen to try to distract you.  Elements like mud and sand are introduced in an attempt to break your rhythm.  Updrafts will lift and bounce your bike all around.  Platforms will start to crumble if you stay on them for too long, or move around in pretty much every direction making landing a jump more difficult.  There are lots of new things to look forward to, and they help give the already unique stages their own feel. 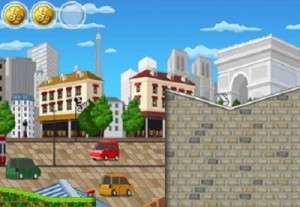 You might think a game as simple as this would only offer up modest graphics, but you’d be mistaken.  Bike Rider DX is a real treat for the eyes.  Its stages display beautiful backgrounds that are absolutely bursting with detail!  Layers of parallax scrolling are a graphical pleasure that I wish more games took advantage of.  The subtle 3D effect is a cool compliment to this design. The colorful art style is great, and the different worlds give a chance for the game to use it to the full, showing off fun, well defined visuals that are perfect for the theme of each stage.  From the sunny palm tree lined coast of Hawaii, to the icy Antarctic with the colorful northern lights high in the sky, each stage is a joy to behold as you ride all over the world.  Add in a smooth frame rate, and you have a visual winner.

Rivaling the games graphics (if not surpassing them) is the game’s music.  Its electronic pop soundtrack exceeded any and all expectations I had … it’s awesome!  The music is so awesome in fact, that it makes me look back on other games soundtracks that I’ve praised and wonder if I’ve over sold them.  Seriously, these tunes are incredible, and in a league of their own.  If you enjoy this style of music, you’re in for a real treat.  I was thrilled to find out that the ability to listen to the game’s soundtrack was unlocked after I beat the game!  My Activity Log shows a ton of time spent with this game (especially for a newer download) and this is due, in part, to my just sitting back and listening to the great tunes.

Control in Bike Rider DX is superb.  It’s tight in a way that you might expect to find in a Mario platformer, but not an eShop download!  Simple, and precise, any failings will be the fault of the player, not the control.  The circle pad is used to slightly alter the speed of the bike, and jumping is a simple tap of the A or X button (with good timing this can even extend beyond the basic and double jump)  That’s really all there is, but is anything else needed?  Not really, especially when what is offered is executed so well! 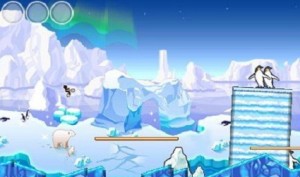 The game offers tremendous replayability.  I already mentioned collecting all the gold coins in World Tour, but Grand Prix fittingly offers endless replay value, with both normal and hard difficulties.  Trying to achieve a top ranking is always a draw.  Really though, even the World mode offers strong replayability, just for the simple reason that it’s so much fun!  Both modes are ideal when you have just a few minutes to play (although don’t be surprised if those short sessions extend much longer than expected) and are a very fun way to chew up some time.

Any complaints with this game?  Not too much, but there are a few.  The game has an awards section, which is a fine feature in and of itself.  But the game never informs you if you’ve earned awards.  You need to go into the awards section and scroll down to see any you might have achieved.  How much more satisfying (and user friendly) would it have been if these achievements were displayed at the end of the level in which you achieved them?  As far as other achievements go, while it’s nice that your top rankings are recorded in Grand Prix mode, I wish that you could enter your initials.  This would make it much easier to compete with friends.  My last disappointment (also with Grand Prix mode) is that you can’t pick the background.  I understand why the layouts are random, but there really is no reason for this to extend to which backgrounds stage it displays.  It’s a missed opportunity.

With full featured, improved, and tight controls (no smart phone touch screen) and pleasing 3D effects that compliment it, this is the definitive version of Bike Rider DX!  It really is a must own 3DS game, so head to the eShop if you missed this last month and download it.  Maybe if enough people buy it we’ll get a Wii U version.  Have fun!