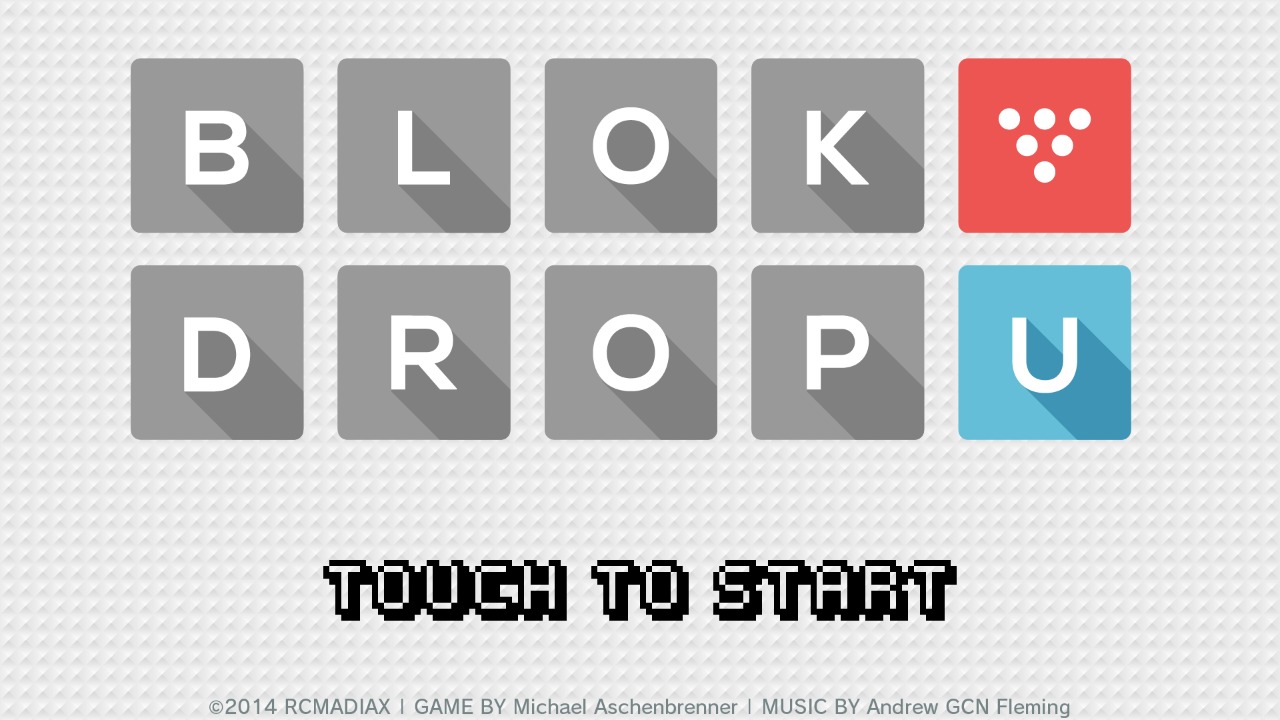 Developer RCMADIAX is the first Wii U developer to release a game developed using the Construct 2 game engine on the Wii U eShop.  The one man development team created a great little puzzle game with a very simple concept and some interesting twists.  The object of Blok Drop U is to guide a the red block safely to the ground by eliminating the grey blocks underneath it.  This is done so by tapping the grey blocks on the GamePad’s touchscreen.  The concept is so simple gamers of any age would be able to enjoy Block Drop U.

Early stages of Blok Drop U familiarize players with the basics of the game, as any good game typically would.  After clearing the first set of stages is where Blok Drop U gets interesting.  The second set of stages introduces blades, which would be more accurately be described as saws, and the third set replaces saws with bouncing blocks.  While the saw stages were fun, the bounce block stages seemed to be a bit more challenging.  Strategy is also challenged a bit more in the bounce block stages because the bounce blocks can not be eliminated by tapping them and are a permanent fixture in the levels, unless they disappear into a pit.

None of the individual elements of Blok Drop U, such as graphics or music, stand out but are adequate for the game.  Personally, I liked the graphical style of the game and it is what one could expect for a puzzle game.  The music in the game doesn’t vary so some may end up turning down the volume but I enjoyed the soothing techno loop.  The good thing about the music is that it’s not overwhelming or distracting, which is sometimes the effect that some looping tracks have.  For a one man development team Blok Drop U is not overly lacking in any particular area and actually looks and plays really well.

Blok Drop U is a great eShop download for any fan of puzzle games.  While the game is not very long and I was able to complete all three sets of puzzles in about an hour, the price is right at just $1.99.  Also, gamers will be sure to appreciate is that the game is very small and will only take up 35 MB of hard drive space.  A level creator could have been an interesting addition to Blok Drop U and will hopefully be considered in an update or another release of Blok Drop U.  I would love to see more levels and some other interesting obstacles in a future release of Blok Drop U.  Gamers young and old will enjoy Blok Drop U and at such a great price it should definitely be added to any gamers library.

RCMADIAX is not only preparing a release of Blok Drop U in Europe Q2 2014 but also working on two new titles, Super Robo Mouse and an unannounced title.  Maybe we’ll get Blok Drop U 2 sooner rather than later!