Bowling Bonanza 3D is a game you might have had for a while, as it was first released over five months ago.  Since it’s just been made available as part of this weeks European downloads however, I thought I’d take a closer look at it.

This is the second 3DS bowling game I own, the first being Smash Bowling 3D.  When I reviewed that game back in August, I felt it was just slightly above average, let down by underwhelming visuals (including poorly implemented 3D)  lack of computer opponents, and even basic omissions like not letting you choose ball weight.  I’m happy to say that Bowling Bonanza eliminates these concerns.  It’s a better looking (and sounding game) with much more diversity, including a cool looking replay function that lets you view shots from various angles.  The 3D effect, while not great, is improved, and it is easier to hold the “sweet spot”.  You can pick from different ball sizes and weights too, which is a basic but important inclusion that I’m happy to see wasn’t overlooked. 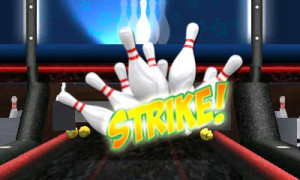 The biggest edge Bowling Bonanza has is the inclusion of cpu opponents.  There is plenty of competition (with multiple difficulty settings to select from) available across various game modes, which gives the title structure and holds your interest, making this a game your more likely to revisit.  Whether your earning trophies and increasing your rank while unlocking more difficult leagues, or eliminating the competition as you progress in a series of best of three games while unlocking new bowling balls, there is simply much more to do here. 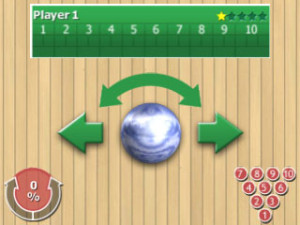 Bowling Bonanza definitely has a leg up on the competition in several regards, but there are some areas where it’s closer to a gutter ball than a spare.  Take the control for instance, which is certainly okay and offers a clean and easy to read touch screen.  But I don’t feel it offers as much input, with ball speed being the most notable example.  It seems to stay pretty much the same, regardless of how fast you swipe.  The manual claims otherwise, but having experienced this game for a couple of months now I truly believe that it must be a typo.  The game is strictly a stylus only affair too, with no choice for traditional button controls.

The physics are another area where I feel this game falls behind the competition.  At time pins seem like there almost glued down.  A well place ball that has ‘Strike’ written all over it may not even manage to topple half the pins.  At least the physics seem to be consistent (more often than not) and I’ve managed to learn over time some of the quirks.  But they definitely could have been better, more realistic. 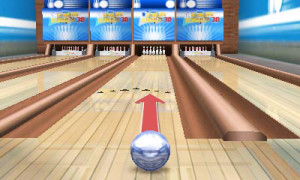 I’ve yet to play the definitive 3DS bowling game, but (so far) Bowling Bonanza gets a slight nod from me, thanks to offering a more featured game, with a structure that’s kept me playing longer.  There is still plenty of room for improvement however, so only fans should consider a download.