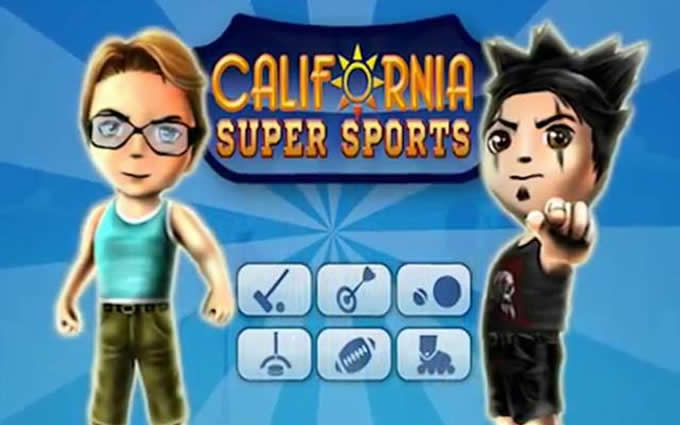 California Super Sports is the latest game from long time DSi developer Cypronia. They may be best known in recent years for their trilogy of Cake Ninja games, which have attempted to emulate the popular Fruit Ninja series. Cypronia is no stranger to sport titles though, with Super Sports Curling Championship being a recent example. California Super Sports shares a similar look to the former game, but packs much more content.

There are 6 sport games in this collection. They vary in quality, but we’ll take a look at each one in the order they’re presented. Most of the games are fairly unique, in that they aren’t the type you tend to find in mini game collections such as this. Before getting to the selection screen though, you’ll register a profile (up to 4) choose an avatar among selection of 10 “chibi” characters (5 guys 5 girls) and let the game know if you are right or left handed. Now on to the games …

The playing order will be randomly selected prior to starting (this is true of most games in this collection) and in croquet it actually may be advantageous to go later so you can watch and learn from the computer characters. You can select from a few course layouts, with the 9 wicket being my favorite. If playing against cpu characters (you can also play solo) you’ll want to set them to easy for this game … there is usually one that seems to jump out to a quick lead from the start, and they all seem to have a grasp on the games “unique” physics structure from the outset, whereas it will take you time to learn. 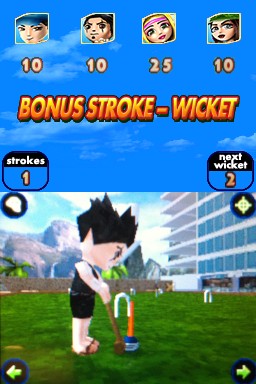 As someone who plays real croquet, I can say with a fair amount of confidence that the physics in this game are indeed rather odd, and unfortunately not reflective of the actual game. Contact with any object will often send your ball careening with a lot of force, far further than it would in a real game … even the gentlest of taps can send a ball well of course if it collides with something! This makes the game challenging, but unfortunately for the wrong reasons. Traditional strategy doesn’t apply as much, and I felt like I almost had to “unlearn” certain aspects of what I knew about real croquet. It’s definitely a flawed approach, one that can’t really be overlooked. With that said however, this doesn’t necessarily mean that the game isn’t fun. People unfamiliar with croquet might enjoy it, and even I was able to get over my initial frustration with the game’s odd take. In fact, even with the poor physics, it’s probably turned into my second favorite game in the collection. Flawed but fun.

The stylus control took me a few minutes to get used to, but I think it turned out pretty decent … and it’s a good thing, as the same control scheme is used in a couple of other games. It certainly had nothing to do with my aforementioned frustration and in fact helped me to compensate for the physics setup. Solid overall.

It should be noted that depending on the course you select and number of competitors you’re playing against, a game can run long, making it perhaps not the most optimized for handheld play. There’s no way to skip or speed up the cpu characters turns, and while it isn’t as big of an annoyance in this game as in others, it could be a factor.

One last thing I want to mention about croquet … for a title that advertises sport games “popular in the U.S.”, I found it surprising (and disappointing) that “poison croquet “ a very popular variant in the States, was nowhere to be found. I certainly would have preferred it to two versions of ‘6 wicket’.

This is probably my favorite game of the bunch, perhaps due to its immediate accessibility. It has the same solid control scheme as croquet, but seems to work even better here (the lack of obstacles sending you flying off course probably help) You’re able to adjust the length of the game, setting the winning score from a low 9 all way up to 31. Options like this are appreciated, and make Lawn Darts a much more ideal portable game.

Wind is the biggest obstacle here, and you’ll need to strategize to maximize your points. It’s easy to tell which way it’s blowing, with visual cues and the mph display. Like regular darts, you need to finish with the exact number of points or incur penalties. Ties will bring on a sudden death showdown, where the CPU character(s) really gets tough trying to get the winning score. A seagull will occasionally fly overhead holding a target, and hitting it gives you 5 points, which is a nice bonus compared to the normal 1 and 3 point scores. And watch out … even though you’ll want to get the 3 point bulls-eyes, the sound effects for this score can get a bit obnoxious and the instant replay means you’ll be hearing more of it than you’d like.

Going back to the advertisement of games “popular in the U.S.”, lawn darts have been banned since the late 80’s in the U.S. …

This game wisely foregoes stylus control for typical button d-pad combo. Throwing’s done with button A, you can duck with the B button, and rolling left or right is accomplished with the triggers. The only control I seemed to struggle with consistently is catching, and unless you don’t mind getting hit I’d advise you not to bother trying it much. 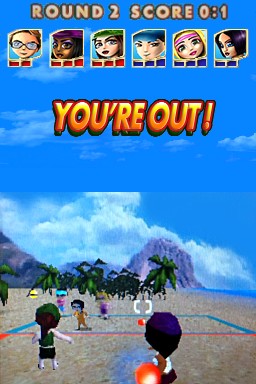 Targets appear occasionally and hitting them with enough force will bring an eliminated player back in the game. Although you can adjust the skill level of the CPU opponents and your teammates, you can’t adjust the game length or anything. Thankfully they’re short enough to not overstay their welcome.

This game is easily the worst bunch for a few reasons. First, there’s absolutely no customizing … it’s the same 10 round game only. Lack of choices are made even worse by how very l-o-n-g each game lasts. Again, there’s no way to speed up or bypass cpu characters, which is poor design overall but especially for a handheld game. And unlike croquet, in this game it is a huge annoyance! A 4 player game is a much too lengthy ordeal. Play it solo or against just a lone cpu character once to check the game out … it’s doubtful you’ll want to return again. The game is just boring, and the length makes it all the more painfully obvious. Add in the odd physics (same speed pucks can slide under targets or send them flipping in the air) and out of place mini golf like obstacles, that are meant to be fun but just add frustration, and you have a dull, ill-advised inclusion that’s not worth your time.

This game’s very simple, so be sure to adjust the score threshold beforehand, otherwise it won’t be an adequate challenge. All you have to do is tap the targets for your character to throw a football at them. There’s a stamina gauge so your character can tire quickly, but after the first few games this probably won’t happen. The charge shots take away more stamina, but I never really felt the need to use them. Certain targets that you hit will replenish your stamina too.

Bad targets can make the game more challenging, as can wind which also plays a role here (although not nearly as much as in lawn darts) You probably won’t notice it unless the difficulty is set higher, and even then only in later rounds and on distant targets. The distant targets are often worth more points, which are why they’re supposed to be harder to hit, but overall it wasn’t much of a challenge.

One nitpick … the game gives you scores for each round, but strangely omits a running total. After a few rounds, you might lose track who’s ahead and by how much, especially if you are playing against 3 others. This is a small point, but easily noticeable and one that should’ve been addressed.

This simple game features short, medium, and long tracks. The touch screen controls have you following prompts, either screen swiping or tapping certain areas. It works okay enough but tends to block the view. A shame since (despite an inconsistent framerate) this is probably the most visually impressive game. Perhaps, like dodgeball, traditional controls might have worked better here.

Graphically, this collection of games looks better than advertised … for whatever reasons the videos and screenshots that appear in the eshop and online make the visuals appear blurry and washed out. I’m happy to say that isn’t the case, and overall I tend to like the graphics. The 3D polygons are primitive, but not bad. Some pixelization might turn off gamers spoiled by many of today’s retail releases, but the nostalgic gamer in me didn’t mind. I think it’s pretty good for DSiWare, and I give credit for at least having ambition in trying to create the Santa Monica beach atmosphere. The scenery is attractive, with nice mountains in the distance, fluffy clouds in the sky, plenty of palm trees, rocks and flowers scattered across the landscape, various tall buildings, etc. … With the exception of the “chibi” characters that I didn’t much care for, I have no real complaints with the graphics. 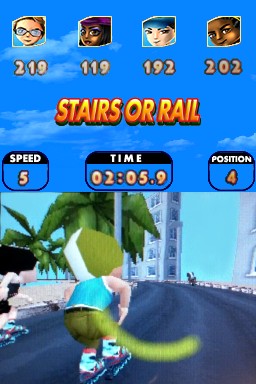 The music seems appropriate enough, but overall I found it fairly generic. I appreciate that there’s variety, but the quality varies. The sound effects are decent with things like unseen spectators cheering, birds chirping, the wind blowing, etc. … they add a bit to the resort type setting.

A couple more games would’ve been nice (mini golf seems well suited to the control scheme) and some type of story mode to tie everything together could’ve worked, but really the biggest omission here is a lack of multiplayer support. A game like this practically screams for playing with friends! Other Cypronia gamed (like Cake Ninja 2) had multiplayer. Why a game like this, that’s much better suited to it, doesn’t have it is a mystery. What is no mystery though is that its absence hurts the package, and it deserves to be called out for it.

Overall though, despite some hit or miss choices, I found California Super Sports to be a pretty relaxing and entertaining little game. And it’s one that’ll give you value for your buck, as it has several hours’ worth of entertainment, not to mention some strong replayability (each game has a list of awards, and trying to unlock these achievements encourages further replay value) While it may have had a hard time standing out on the 3DS eShop, hopefully DSiWare players give it a chance. At only 500 points it’s worth it for sports game fans and it joins the ranks of a handful of solid DSiWare games that have been released so far in 2013.