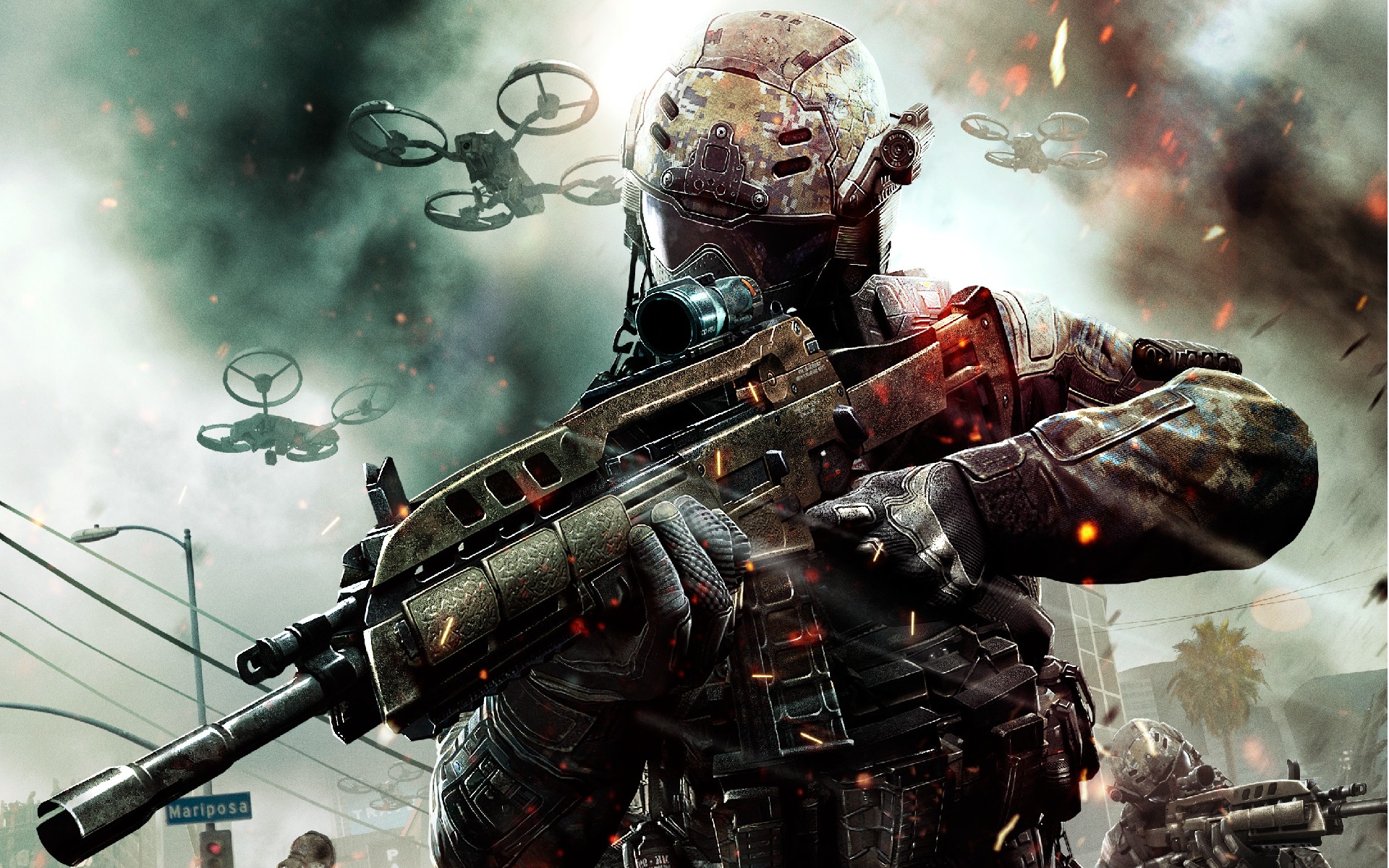 Another year, another Call of Duty game, but this time the game comes fully graphic to a Nintendo system.

I am not new to the COD series by a long toss of the grenade. To me, Call of Duty Black Ops 2 has been one of the most enjoyable to play in a while.

The game takes you through duel story lines as you are bounced between a cold war father, Alex Mason, who may be recognized as one of the main characters from Black Ops, to his 2025 futuristic son David Mason. The two stories are connected when David Mason visits his father’s old partner/buddy, Alex Woods, while looking for information about his past and terrorist leader Raul Menendez. As Woods tells David about his father and his journey together, the game takes the player back to late cold war 1980’s to play as Alex Mason. The information that Woods gives David helps him and his team track down Raul Menendez.

I will admit to being worried about Tryarch taking the COD series to a not really distant future world of 2025.  We already have plenty of other futuristic FPS and we didn’t really need COD to go that direction, but what impresses me the most about COD Black Ops 2 and sets it apart from the rest is how well the game’s future aspect is balanced with futuristic but real weaponry.

The futuristic devices are advanced but yet plausible. Items like gloves that allow one to stick to sides of mountains, AI/Remote controlled mini Land Walkers, that frankly kick a lot of butt, to flying drones that can take down enemies from the sky…ok, that isn’t futuristic and new. Nothing that I really used or saw made me believe we really couldn’t be seeing this technology used in a war about 10 years from now.

I almost am afraid to say this, but I am getting old. Yes, it sucks getting old, but with that one becomes set in their ways. I started realizing this when I preferred the GameCube controller to any other scheme on the Wii. (ie Mario Kart, Brawl) This being set in my ways has transferred over to the Wii U. Don’t get me wrong, I absolutely love the GamePad, I just found myself wanting to use the Pro Controller more then the GamePad. For me, the GamePad didn’t really offer much in the way of game extras. Yes, having the cut scenes in your hand and the ability to take it with while you ran to the other room to stop your dog from chewing your shoes was nice, but that is about all the GamePad offers. In game action, I found the GamePad screen pretty much useless.

I am probably not the best person to talk about the online aspect of COD. In fact, the last time I played a COD online was Black Ops, and lets just say my experience was full of me crying in the corner.  But I decided to put on my big boy pants to try my luck at the online world of Black Ops 2.

Let us be honest with ourselves, the online world of Black Ops 2 on the Wii U is not a good judgment of the Black Ops 2 online world as a whole. When playing Zombies, the most I ever saw online was in the 500’s. During my normal battle matches, that number averaged about 1,500 players. One would think with these numbers I could have some luck online. Yes, I pretty much still sucked, but I had fun sucking.

I never really had any trouble with any online features. No games were ever dropped, nothing too glaring with finding matches to join. Anyone who has played games online a lot (Halo for me) realizes that there are times were one can become stuck in that infinite loop “searching for players.” I really didn’t have any more trouble with this than normal.

One of my favorite parts of the online mode was the ability to talk to my group. Disappointedly, one cannot use the GamePad’s built-in speaker to communicate with the outside world…well, outside your house. This was a little annoying, but it is something that can be easily fixed. Something as simple as plugging in iPhone headphones, the ones with the mic, allows you to communicate freely with friends. Of course, someone can go out and buy any priced headphones and plug them into the Wii U GamePad’s 3.5mm plug.

Over all, I really enjoyed Black Ops 2. This is the first time in about three games that I could say the development team wasn’t trying too hard to capture what the earlier versions have done. Tryarch did an amazing job balancing the never before done aspect of the future with the already proven modern day COD. The futuristic weapons were advanced but not to the point were they became unbelievable. Call of Duty Black Ops 2 is a sure-fire buy for any FPS fan.