Crazy Coaster Deluxe for the Wii U is exactly what it sounds like – a game that allows you to build all sorts of crazy rollercoasters in a 3D environment.  What makes it more fun is the presence of the crazies, coaster loving freaks that flock to whatever location a rollercoaster is being constructed.  Each have their own criteria they are looking to see filled, such as riding a coaster of a certain length, or one that has a particular number of loops.  The happier they are, the more likely you are to max out your stars, and quickly earn experience points and cash for unlockable content.

For those who’d prefer to let their imaginations run wild without having to cater to the whims of the crazies, there’s a sandbox mode.  This is best experienced after you’ve made progress in the campaign mode though – the amount of things you have to work with depends on what you’ve already unlocked.  However it’s a fun addition, allowing you to flex some creative muscle. 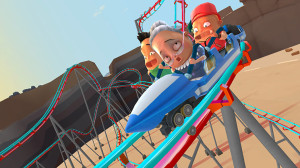 One of the strongest aspects to this game is that it’s user friendly.  There’s a helpful tutorial to give you a feel for everything, and the intuitive controls (stylus or traditional depending on your preference) prove to be quite comfortable.  If you think the game looks intimidating, know that the control setup, though definitely not perfect, goes a long way to diminishing that concern.

This is an iOS port.  The 3D graphics are bright, but very far from cutting edge.  It’s a very conservative look, but it seems to function well enough with the game’s design.  The globe spanning locations show some imagination, and the off-the-wall characters with their various reactions are fun to watch.  You can even add to the scenery yourself, and seeing your own touches coming to life is very enjoyable.  One of my favorite visual touches is moving the GamePad to look around while riding a coaster.  There is some occasional flickering and stuttering, but the game runs pretty smooth more often than not.  I’ve noticed some graphical quirks here or there (completed coasters not always appearing on the map being one example) but nothing too severe. 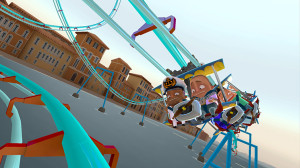 As an audio package, the game fails to achieve very high marks for the simple fact that very little will play through the GamePad without the use of headphones.  On its own it’s a largely silent affair, and the few snippets that are audible seem completely random.  The music itself is okay and unobtrusive, but not too memorable.  The sound effects are stronger than the tunes, with the squeals of the crazies and the creaking of the coasters (recorded from actual rollercoasters) helping to keep you engrossed.  Overall the audio is solid enough, but clearly lacking in some polish.

Online leaderboards can be accessed for each location, and they’re a nice inclusion.  Not only can you view the high scoring coasters of others, you can also rate them.  This is a fine bonus feature that can help to extend the games life, if and when repetition sets in.

While I’ve mixed feelings on Coaster Crazy Deluxe, I think the creativity and slapstick humor of the game will hold some appeal, especially for kids.  Furthermore it’s the sort of game that encourages careful thought and planning.  For ten dollars there is a good amount of content here, probably best experienced in shorter sessions.  If you’re a gamer with perseverance who finds the thought of constructing crazy rollercoasters the world over intriguing, this is a download to consider.