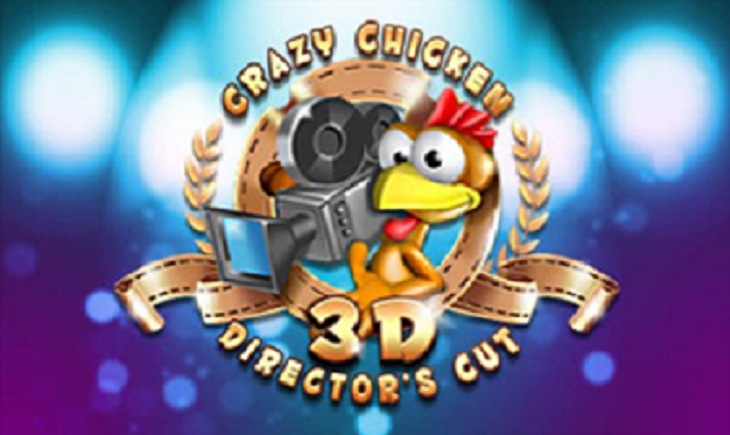 Apparently a popular series of games in Germany spanning several titles and other merchandise (thank you Wikipedia) Crazy Chicken: Director’s Cut 3D is my first exposure to the franchise.  While I admittedly can see the potential for quick and humorous casual fun, this game left me with more negative than positive first impressions unfortunately.

A simple shooting game taking place over both horror and sci-fi movie sets, Crazy Chicken is played solely for points.  There’s never a shortage of targets to aim for, and even some mild puzzles will add to your running total.  There’s replay value in trying to top your best scores as you learn your way around the levels.  For me though, I haven’t found the game compelling enough to stick with it for too many multiple plays. 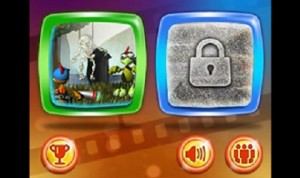 This game was recently released for both DSiWare and the 3DS eShop.  I haven’t played the former, but I have to presume there aren’t too many differences.  The 3DS version boasts 3D in the title, but I’ve found the 3D is hardly noticeable, the only real effect I’ve seen is things appearing to be blurrier.  It’s a pretty weak implementation in my opinion, and having to constantly pan around makes the effect harder to hold.  Speaking of which … 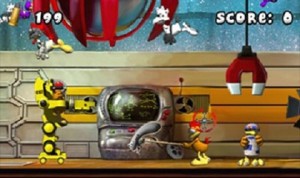 I wish this game had been on rails.  I don’t normally advocate for less control, but constantly needing to slide the stylus to move both up and down plus left and right, shooting via the triggers, and reloading by hitting up on d-pad or tapping the corner icon, just wasn’t comfortable for me.  On rails would allow shots to be executed by tapping the touchscreen with the stylus, something the system’s ideal for.  Besides the tactical feedback this could offer to immerse the player, a moving and panning camera would fit in with the game’s movie themes.  The current setup only serves to break up the games flow, and is just awkward and hand cramping.  And there are no real options to tweak the settings or have alternate control configurations, since the circle pad’s nearly broken in this regard, not even scanning the full length of the screen!

There’s some humor displayed here, with the over the top chickens scattered all about, and interacting with certain parts of the scenery trigger amusing animations.  I do wish a greater portion of the background was interactive though, as more often than not it’s simply window dressing.  There’s some pretty good music too although, sadly, it gets drowned out by poor sound effects.  For whatever reason the game gives you the option to mute the music, but not the sound effects, which was a big detraction for me! 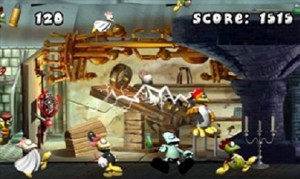 While $1.99 price point is great, the sad truth is that there’s very little here.  Even with leaderboards and trophies, it’s still the  same monotonous gameplay (grafted onto uncomfortable controls) spread over two short levels that simply repeat over and over while never changing.   When a game is priced this low I’m fairly forgiving, but there are still some standards to be met, and I still want to have fun.   I didn’t have much with Crazy Chicken unfortunately.  A mindless shooter to play in quick bursts could definitely make a good home on the eShop, and I’m hopeful that if the series continues, future installments will show a bit more thought and care.  I’m sure this game will have some appeal for series fans or budget gamers … it just wasn’t for me.  I’ll stick with Teyon’s other $1.99 eShop game, Bird Mania 3D.