I won a copy of this new Wii U release via Twitter.  Having played it the question is would I have been happy paying $3.99 to download it off the eShop?  I think not, and here are some of the reasons why.

The goal in this puzzle game is to get gems to the bottom of the screen while preventing cubes from reaching the top.  You can tap certain cubes to destroy them, and a limited number of bombs are provided.  There’s four different modes, although only the last two come close to resembling any kind of “Blitz”.  This is a slow game – too slow! 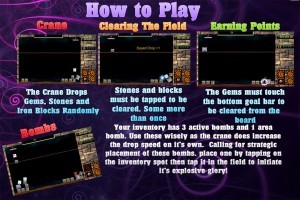 The controls are mostly fine, although there is a noticeable delay if dropping many items from the overhead crane.  Truthfully you’ll need to manually drop a lot, as it is painful waiting for the game to do so with its lackadaisical pace.  I found myself tapping the drop button as quickly as I could just to fill the screen and have some things to interact with.  With a negligible ramp in difficulty and no time restrictions, you may find yourself quitting not from challenge but boredom!  Cube Blitz simply drags too long, soon wearing out its welcome. 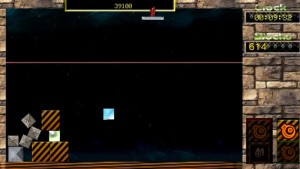 Visually this is about what I’d expect from a budget puzzle game.  The complementary music is decent, although nothing like is heard in the trailer.  Tracks change too slowly also – an option to select individual tunes would’ve been nice.  The audio-visual package isn’t what warrants more attention, it’s the gameplay.  I’d like to see this title patched with increased ramping speed, an optional timer, a pause button, and some local leaderboards for a minimum.  I think these are key additions that could improve the experience.

There’s lots of good puzzle games on the Wii U and I don’t feel the sluggish Cube Blitz does enough to stand out in a positive way.  It’s a bit rudimentary, and as a result can get fairly boring.  While certainly not a terrible game if you play it aggressively, I have to wonder if that’s even how the design was intended.  I’ve nothing against a more relaxed puzzler per se, but in its current form Cube Blitz is a sale game for the big puzzle fan only.  Everyone else may want to wait for Wildcard Studios next Wii U project, World of Music.

There’s lots of good puzzle games on the Wii U and I don’t feel the sluggish Cube Blitz does enough to stand out in a positive way.  It’s a bit rudimentary, and as a result can get fairly boring.