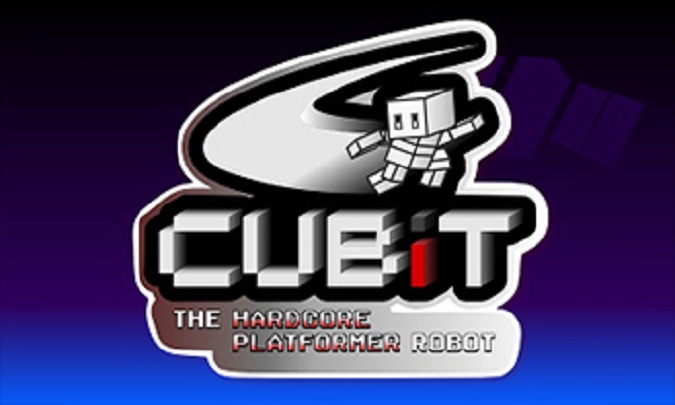 Cubit The Hardcore Platformer Robot is a game that definitely lives up to its name – even “hardcore” gamers better brace themselves if they plan on progressing very far through it.  I grew up playing tough platformers from the NES era, but you wouldn’t necessarily know it from watching me play this new eShop game.  Cubit has had me questioning my qualifications as a game journalist …

This game reminds me of Bit Trip Runner or 2 Fast 4 Gnomz.  They are difficult games in their own right, but Cubit is in a whole other league.  It throws its unforgiving running platforming at you very quickly, and you’ll be failing repeatedly before long – there is little time to ease into this heavily challenging game. 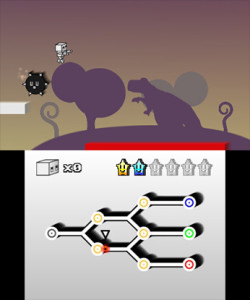 There are two modes in Cubit.  Soft Mode is described as being for “all types of players”.  Quite how that typo made it through lot check I have no idea, as there’s no way all types of players can handle a difficulty level this high!  Should you find this too easy however (and I guarantee internet trolls will spew bunk about just that) Hardcore adds collectibles in spots that are nearly impossible to reach successfully, and limits your lives on top of it.  When I think of how many hundreds of lives I’ve burned to just make it through Soft Mode, the idea of beating a harder mode with single digit lives makes my head hurt!

Once I changed my mindset from beating the entire game to just getting as far as possible, I’ve been able to not only really enjoy the game, but advance far as well.  Typically after failing a few dozen times (yes you read right, dozens – the game puts your shame on full display) I try a different level.  Replaying is surprisingly addictive in spite of the colossal challenge, and patience and practice ultimately leads to a successful rhythm, and a great deal of satisfaction! 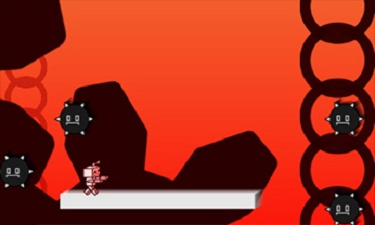 The visuals in this game are very simple, though in this case I’m grateful – anything more would probably distract and add another layer of challenge to a game that clearly doesn’t need it.  As it is some platforms blend in with the background.  I do think the game looks solid with the 3D active, and Cubit is a cute character.  Audio fares much better than the graphics, especially the music.  The manual says “music plays a very important role”, and while I think that’s overstating it a bit, I can’t deny that I enjoy the catchy techno tunes.  There is a certain rhythm, and it does fit the onscreen action pretty well.  Jukebox lets you listen to the various tracks, an inclusion that I like a lot!

Control is where Cubit might cause concern.  There are plenty of reasons for the games difficulty, and the quirky control is among them.  Although it is a jumping only affair (Cubit runs forward automatically) the control just isn’t as responsive as I would have liked.   After playing for a while, it became quite evident when my double tap only recorded as one jump, or a tap at the end of a platform failed to record at all.  I snuck a peek at some other reviews (and comments on Miiverse) and sure enough this was pointed out by most. 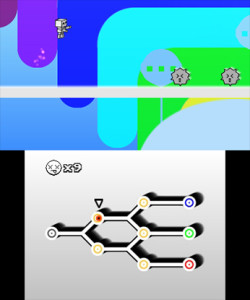 In fairness to Coder Child, they’re already addressing the jumping issue, and have acknowledged that though it was a design choice meant to help, many have found it otherwise.  I’m very glad that they’re engaging the game’s fans through social media and other means (indies are great for that!) and I’m confident they’ll take the constructive criticisms to heart for future releases.  In any event, with practice, the control becomes less bothersome.

The game is short (not unexpected for the $2.99 cost) but there is some solid content.  Each player can have their own profile should you want to bring your family and friends (or enemies) in on the difficult platforming.  The branching paths are welcome – not only are they good for replay value, but they grant a temporary reprieve from the heart racing challenge as they fill you with hope that the next sections might be easier (spoiler alert – they never are).  Extra challenges (acheivements), stats, and (should you have the skill to earn them) unlockable characters, along with multiple endings round out the package.  Not bad, especially factoring in that this game was created by just one person!

Cubit The Hardcore Platformer is immensely challenging on every level, and the final challenge it presents is how to score it.  Even though I’m giving it a solid recommendation, take it in context.  If you’re not an expert gamer, and would be frustrated playing the same level over and over, this is a game that’s best passed on, trust me.  It’ll spike your blood pressure, and put your 3DS in danger when you fling it across the room in rage.   Conversely, if you value challenge, and don’t mind being patient for a very satisfying payoff, download Cubit – you’ll get definitely your money’s worth.  For those who fall somewhere between, the low cost may push you to take the plunge – the game is a grower.  If so maybe I’ll see you on Miiverse … where my crying along with the other Cubit players is occasionally interrupted by moments of satisfying triumph.