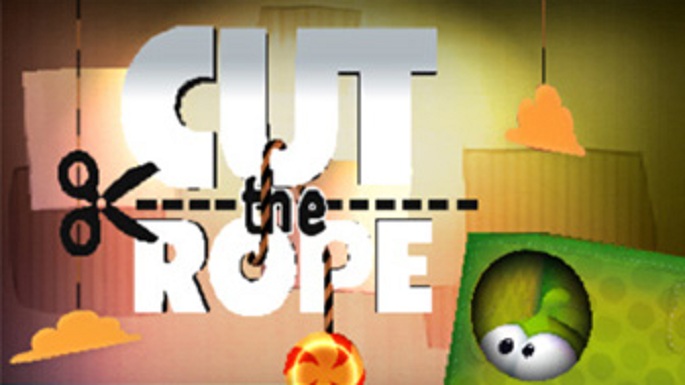 Cut the Rope is a fun little game, that earlier appeared on Nintendo hardware courtesy of DSiWare.  This 3DS eShop version brings with it sharper visuals, token 3D, and most importantly more puzzles.  It’s as fun as it ever was, but the question is does anyone need this 3DS port?

It’s a fair question too since, over 300 million copies of this game have already been downloaded in one form or another over the years.  But before talking about what the 3DS version lacks, let’s chat about what’s there.  The answer is very fun gameplay.  Cut the Rope on 3DS retains most of what made the original game a hit back in 2010. 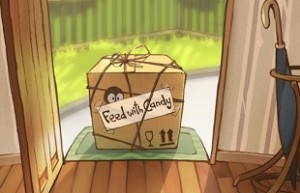 For those who don’t play games outside of dedicated gaming systems much (if at all), Cut the Rope has a simple premise where the goal is to get candy tied to a rope(s) into the mouth of a hungry critter.  The fact that ZeptoLab has been able to parlay this barely there plot into an empire of merchandise speaks to how much fun millions have found the game to be.  The gameplay is easy to grasp and immediately satisfying, while offering incentives and new puzzle elements to keep you playing.

The main incentive is the adoption of the ‘collect three items’ approach. It’s a technique that lacks in originality, but has proven to work quite well.  In Cut the Ropes case you’ll be replaying levels, trying to nab all three stars strategically placed out of reach.  What’s nice is that there is no minimum needed to move on.  Even if you finish the level without grabbing any stars, you’ll still advance (though it might eventually catch up with you if you skip too many) and you can even choose to bypass a level entirely if it’s giving you too much trouble.  This design shows the approachable nature of casual gaming, and it’s not a bad thing.   Completionists will want to grab every star anyway (and collect all the trophies), so the game can still have a fine challenge for those looking to get the most satisfaction from it. 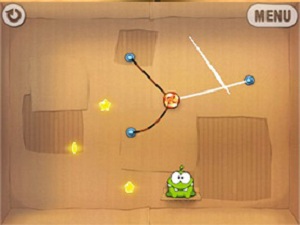 New puzzle elements are introduced gradually to keep things fresh and fun.  Candy falling into colored top hats for instance will teleport around the box, while candy halves (later in the game) will have to be combined before they’ll be eaten.  Whether your candy is ricocheting off a bouncing platform,  or flipping through the air at a tap of the gravity toggling button, there is plenty to keep you amused and make you think.

Visually this game had modest graphics by 3DS standards, but they are sharp and work fine.  There isn’t much variety, but different colors in the background as you advance are a welcome if underutilized change.  The 3D effect is sadly wasted though.  This isn’t necessarily unexpected for a game whose origins are found with smart phones and whose gameplay is built around touch screen control, but it’s still worth mentioning. 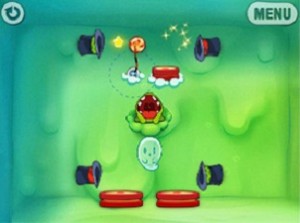 On the audio end, the music is … well, it’s more repetitive than the spartan visuals.  There is only 1 music track that repeats throughout the game’s hundreds of levels!  While this is disappointing, I am very thankful that the solo tune is pleasant enough so that it doesn’t get on my nerves.

There are some technical issues with this 3DS port that vary in importance but nonetheless need to be pointed out.  When I started playing the game, I clicked on the different menu icons just to check things out.  The star icons which take you to the high score screens have horrendous load times.  It takes 40+ seconds just to see scores, making the leaderboards more of an annoyance than a selling feature.  Worse, I found the responsiveness of the 3DS touch screen wasn’t always what it should be … 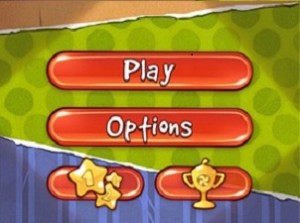 Having to cut multiple ropes proved sometimes troublesome to me, as the game often wouldn’t register more than one.  Taps also seemed to be an issue, and I frequently had to tap several times to get things to work when a single tap should have sufficed.   And some items are so close that it’s difficult for the game to register just what it is you’re hitting (ex -go to cut a rope only to slide it instead!)  In later levels when timing comes into play this leads to unnecessary frustration as you can fail not for lack of knowing how to successfully complete a level, but rather as a victim to the rough controls. When these issues kept manifesting themselves after several hours of play, I had to stop giving this port the benefit of the doubt and admit that its transition to the 3DS was a bit clumsy.

Some people might question the price of this 3DS version when compared to numerous others that are readily available (especially when ZeptoLab made a point in the 3DS press release to mention multiple places where the game is only 99 cents!)  I will say that at least the pricing is better here than it was for the DsiWare version, which has less than half the content for the same $4.99 price. And thankfully Cut the Rope isn’t pulling something as absurd as the Angry Birds Trilogy ($49.99 on Wii U!)

I wrap things up by returning to my original question; does anyone need this 3DS port?  Well if you’ve never played Cut the Rope before, you’ll have lots of good fun with this game, no doubt about it!  And this must be the audience ZeptoLabs in hoping to find.  It’s very easy to see what’s made this game a big hit, and the core experience carries over to the 3DS. 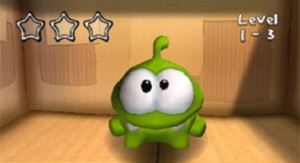 If however you are among those who’ve already downloaded this game 300 million plus times and experienced it elsewhere … well, it’s tough to advocate for this 3DS port.  It’s an old game, selling at a higher price, with touch control that occasionally struggles.  If this were priced at $1.99 (or if it was bundled with one of the sequels) it would have been a stronger lure for people to double dip.  On its own though, there just really isn’t anything here that you can’t get better other places.  This isn’t a knock on the game itself mind you … but its move to a true gaming powerhouse like 3DS does expose it a bit.  It was a big fish in a small pond of genuinely good games on iOS, but on the 3DS good and great games are vast, making it a bit harder for a non enhanced port like this to stand out as much.  Cut the Rope remains good fun as it’s always been, even if the move to 3DS didn’t do it many favors.