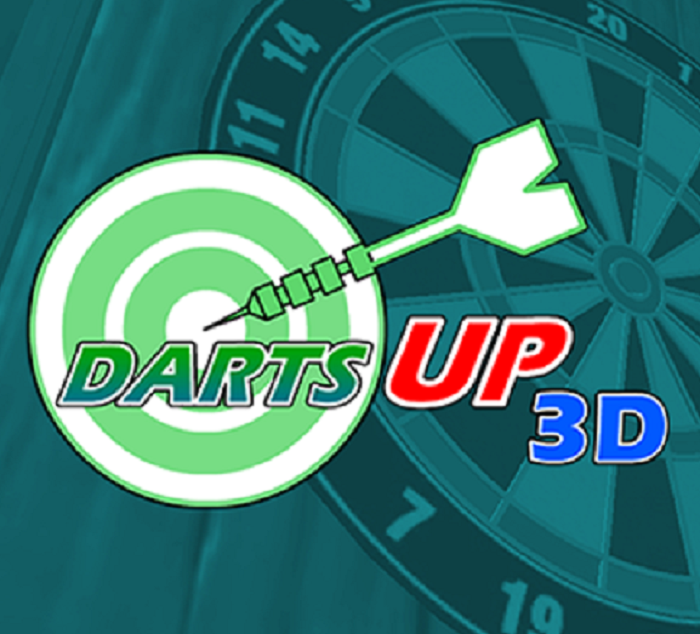 Darts Up 3D makes a positive first impression.  You can select the number of rounds you wish to play, pick from a few different game modes, and choose from several further variants. The amount of selections actually betray its low price ($2.99) especially when you factor in things like multiplayer (available either via a single system, or download play!) and options to use your custom Mii’s in lieu of the existing avatars.  It’s a game that gets off to a good start.

The controls in Dart Up 3D are unique.  Put away your stylus, the game utilizes the gyroscope!  I think this is a very good addition, and it was unexpected, especially for an inexpensive eShop download such as this.  Once the initial surprise wore off, I continued to be surprised by the fact that the motion controls worked quite well.  You might even think this would make the game too easy, as once you find the perfect aim it’s just a matter of simply holding it for subsequent throws.  However the camera pans around between rounds forcing you to once again line up your shot (and there is no marker) plus the goal scores, in arcade mode, are pretty high also.  A flick of your thumb on the circle pad is all it takes to release a dart, and it works better than I expected.  Overall I’m glad this approach was adopted over the touch screen, not just because the game plays well with the motion sensing controls, but also because the gyroscope is a 3DS feature that’s under utilized. 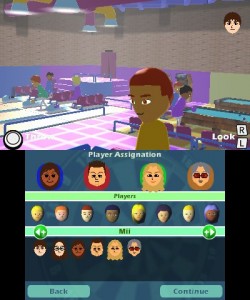 Darts Up 3D looks good, with more visual diversity than you might expect to find in a simple dart game.  One nice feature is being able to hold the trigger buttons and scan around the colorful gaming hall.  Not only is it pretty cool, it’s graphically impressive.  The 3D effect is fine as well, not to mention helpful (more often than not) in lining up your shots. The audio is pleasing too, with what music there is being enjoyable, and nice little touches like muffled background chatter, and occasional commentary.  A very solid package that won’t disappoint your eyes or ears.

Having highlighted the games many positive aspects,  it’s a shame that the one player arcade mode is so limited.  The advancing rounds increase in challenge, but that’s about it.  I had hopes of being able to unlock something additional, but I just kept moving on to the next round and eventually the score threshold proved too high for me.  It is fun in short bursts, but wasn’t compelling enough to maintain my interest.  I really wish there was a tournament, or something that you could play against cpu characters.  Playing solo only goes so far, and makes the single player mode feel almost like an afterthought unfortunately. 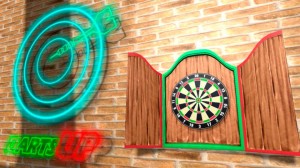 While the single player arcade mode does get dull after a while, great multiplayer secures Darts Up 3D as a keeper.  This focus makes the game a bit difficult to score.  If you’ll only be playing this alone you can subtract a point from the overall score.  Add a point if you’ll be playing with friends.  Multiplayer was clearly the focal point for this game.

Overall I like what EnjoyUp Games did with this title.  It is a fairly bare bones download at its core, especially when playing alone.  But when you add in the graphical polish, cool control method, support of download play, various options to choose from, low price, etc, … it elevates the game quite nicely.  If you aren’t a fan of darts, this probably isn’t the title that will convert you.  But for those that enjoy it, this is a good implementation that you’ll have fun with.  An enhanced Wii U edition with a stronger single player mode would be very welcomed.