It’s a fact of life that every childhood must include Disney in some shape or form. As Benjamin Franklin put it, “In this world nothing can be said to be certain, except death, taxes, and Disney. “ I’m 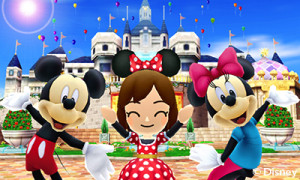 paraphrasing of course, but you get the idea. As a company, Disney has created tons of beloved characters from their vast library of TV shows and films, and their theme parks have certainly brought joy to young and old alike.  So, when I heard about the Disney themed Animal Crossing/Harvest Moon hybrid, Disney Magical World, I was curious to check it out. Although its target audience appears to be aimed at smaller children, I ended up being pleasantly surprised by this title. For those curious as I was, let’s break out that bottle of pixie dust, and see what there is to do in Disney Magical World for the Nintendo 3DS.

Our story begins with a simple letter from none other than Mickey Mouse. You, the player, are a kind-hearted person who believes you can achieve any dream you set your mind to. Because of your 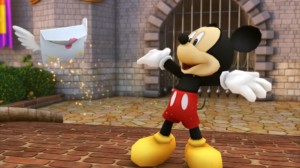 belief in your dreams, Mickey has invited you to take residence in Castleton, a place where dreams can come true. As you explore Castleton, you’ll gain access to other Disney themed worlds, and help people solve their problems as you adjust to your new life. It’s cutesy and slightly corny, yet any fan of Disney will find themselves grinning as they play.

Turns out there is plenty to smile about, as the visuals of the game are very pleasing to the eye. You’ll find plenty of your favorite Disney characters nicely rendered in 3D. As you explore the Disney themed worlds of the game, the visuals really feel like they were taken straight from the movies they 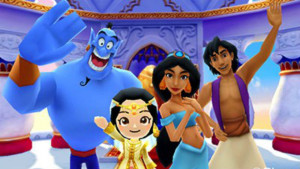 represent. The Hundred Acre Woods looks like a storybook come to life, and Agrabah has the stunning variety of gold, purple, red, and blue hues just like in Aladdin. While the music may be forgettable, it certainly doesn’t hurt the ears; although, the Castleton theme can get old after awhile. Regardless, the artwork and music work well together to create a charming world for you to explore.

Exploration, as it turns out, is the core game play mechanic of Disney Magical World, because everything you do revolves around exploring the connected areas of Castleton and collecting the items you find there. At first, your exploration options are limited, but performing certain tasks that are laid out for you will earn you stickers, which are used to unlock more areas and missions in the game. As you collect stickers in Castleton, you’ll get to manage a café’, master the art of gardening, and even wield magic to become an awesome ghost buster. In addition to this, you’ll be able to do favors for the citizens of Castleton, collect materials to make new outfits, and enjoy holidays as they happen in real time, similar to Animal Crossing.

The café’ is perhaps the most important part of the game, as it will be your primary source of income. Using the variety of fruits and vegetables that you find or grow, you’ll be able to cook dishes for your patrons to eat. You’ll need recipes in order to prepare dishes, as the game unfortunately won’t let you experiment with adding various ingredients together. As well as preparing food, you can furnish your café’ with a variety of themed furniture sets, and you can clothe the staff to match whatever theme 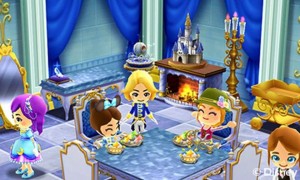 you’re going for.  Keep your patrons happy by selling the food they crave and fulfilling their requests. Doing so will raise your rank, which in turn allows you to prepare greater quantities of food. The best part of the café’ is coordinating a specific Disney theme, and then hosting a party. Doing so will attract the main character of the Disney theme your café’ has, and you’ll get the chance to interact with them and take a commemorative photo. Collect enough stickers, and your café’ will become a two-story building, with the top floor serving as your room. This can be decorated in the same way as your café’.

In order to keep your café’ running, you’re going to need to try your hand at gardening. This is done in the Hundred Acre Woods, where Rabbit will let you use his personal garden. When you plant a seed that you find or purchase, it will grow and be ready for harvest after a set amount of real time has passed. The rarer the seed, the longer it takes to grow. Luckily, Pooh and the other citizens of the Hundred Acre Wood will help water your crops and pull out weeds, so the garden isn’t something you need to keep a constant eye on. You’ll find gardening in between quests to be quite enjoyable. Usually you won’t be stuck waiting without something to do while a crop grows if you garden this way.

While gardening and running the café will net you plenty of gold, you won’t be able to put it to use without the crafting items you find in each world’s ghost hunting missions. There are four themed worlds to explore including: Cinderella, Alice in Wonderland, Aladdin, and Winnie the Pooh. Earning stickers will unlock missions in each world, which will have you traversing labyrinths with a magic 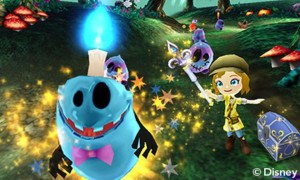 wand to defeat the ghosts that live there. The missions vary from defeating all the monsters in a maze, to collecting a specific item hidden at the end. The game does a great job of spacing these missions out, so you’ll continue to unlock new missions as you naturally unlock stickers. No grinding required. In order to keep the levels from getting repetitive, the game throws in new mechanics, such as timed switches and warp panels at just the right time so things don’t get too stale.  Throw in some fun rhythm mini games in Cinderella’s world, and more gardening-centered missions in the Hundred Acre Woods, and you have some nice variety.

Disney Magical World turns out to be a surprising title for the 3DS. While it lays its overly cutesy Disney charm a little too thick at times, some of the game’s missions can get tricky for a game that appears to be aiming towards a younger audience. It really feels as if the developers were trying to create an experience that both young and old gamers can enjoy, which is what Disney has always been about. Besides the main draw of the ghost missions, the café’, and gardening, the game has tons of furniture and clothes for you to create or buy, and there are a ton of collectible cards that you can receive from the Disney characters that inhabit Castleton.

Although there may be a ton to do the game also suffers a bit from not allowing more user creativity. Furniture items are limited to chairs, beds, tables, and a few knick-knacks, and there is no ability to experiment with ingredients in the café’. Besides the lack of user customization, Disney Magical 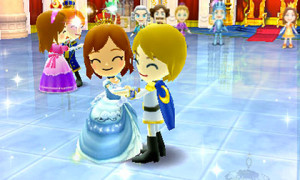 World has managed to add a nice Disney themed twist to the life simulator genre. Add in an AR mode, and Downloadable content, and you have a game that will definitely take some time to complete. Kids who are fans of Disney will love the game, and if you are a Disney fan with a curiosity about the title, you may end up surprising yourself with how much fun the game can be. If the overly cute Disney vibe makes you cringe, however, you should probably pass this game up. Pure Nintendo gives Disney Magical World a 7.5.