The pill falling, color matching, and virus clearing action of Dr. Mario has returned, but this time it’s the bro in green who’s the face behind the puzzle action. Does this ‘Year of Luigi’ eShop download have enough new content to warrant a purchase? Or is it just a minor reworking that will mainly appeal to series fans? 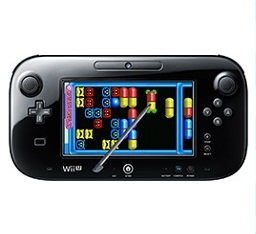 Dr. Luigi has much that will be recognizable, especially for those who’ve played the WiiWare version of Dr. Mario. Retro Remedy is the time-honored standard mode, and Virus Buster has returned as well. The latter now utilizes the Game Pad’s touch screen, which I think is an improvement over playing with a Wiimote. Operation L is what will draw most gamers interest however. While the other modes certainly aren’t without their appeal, Operation L’s newly shaped L capsules force you to change the way you play, and as truly fresh content it’s appreciated. 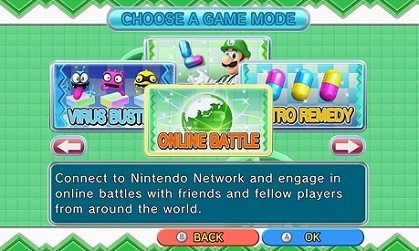 Online battles have also returned in Dr. Luigi. I found the online setup to be fairly quick and easy, but there are unfortunately no parameters to determine the level of competition. The replay value this mode offers ultimately correlates to how advanced a player you are. While opponents are easy to find, a fair challenge doesn’t always await.

Visually this is a colorful game but it retains the strictly serviceable looks of its predecessors (and to be fair most puzzle games for that matter). While Mii characters seem to have been cut, I do like the updated look of the viruses, and the new cinemas are fun to view also. On the audio end, the soundtrack is a mixture of familiar favorites, slight remixes, and pleasing new tunes. All are appropriately catchy. Control is as solid as it’s always been, and with options to use the Game Pad, Pro Controller, or Wiimote, everyone should be happy. 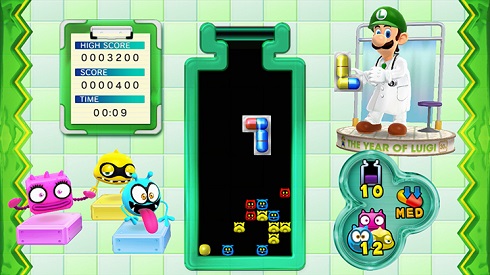 The game is currently selling for $14.99.  While I think that’s a bit high, the replay value could make it a good value (especially if you’re a skilled gamer). Dr. Luigi has taken the proven formula from the Dr. Mario games, and added a dose of Luigi goodness. I do think the game is best suited for those who’ve never played the very similar WiiWare entry. Dr. Luigi is a fun addition to the popular series, but a bit too familiar.