For being such a simple release, Endless Golf has proved surprisingly difficult to review.  There’s so many areas where it comes up well short, and yet I can’t deny a fun and (dare I say) semi-addictive nature prevailing.  Could this be an instance of ‘so bad it’s good’? 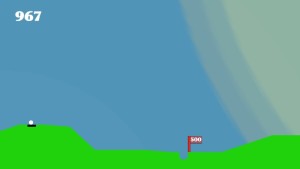 Courses do get more complex, albeit slowly.

It’s been said that ‘eternity is in the hearts and minds of people’.  Perhaps Fanttum Games had this in mind when crafting Endless Golf?  It lives up to its namesake, not even having a reset function!  This procedurally generated game always picks up right where you left off, your score growing through hundreds or even thousands of holes.  Repetition could be a factor, especially if you play for extended lengths.

The gameplay is a hybrid of traditional and miniature golf.  There are hills and such, but par is just two for these single screen holes.  An increase in difficulty is promised, but things ramp so slowly I can see the majority quitting in boredom before the higher challenge comes.  There’s no rough patches, water hazards, windmills, or other obstacles, etc.  None of the “tricky traps” you might expect. 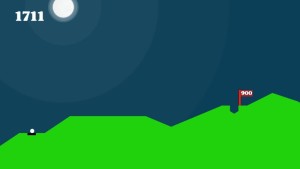 This is about as scenic as things get.

The visuals are … serviceable at best.  Really the only thing to note about the presentation is how plain it is.  In fact this is easily one of the most basic eShop titles I’ve ever seen.  I’m not sure what the developers thought process was when promising “scenic pastures”, but just take a look at the screenshots.  I don’t see it.  Great graphics aren’t necessary, but there is such a thing as too basic, even for budget Wii U eShop titles.

Controls are familiar if you’ve played other physic type games (think Midnight).  One inconsistency I’ve noticed with some frequency though is hitting the ball while it’s rolling, namely that sometimes you can, sometimes you can’t.  As far as the audio goes, there’s no music to be heard, making this a very quiet game.  Some 2600 like sound effects are all the audio present.  Even a single optional tune could’ve gone a long way. 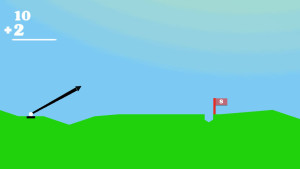 Accessible controls make this an easy game to pass some time with.

“Watch as time passes you by.”  In truth that is ultimately what Endless Golf winds up feeling like, a way to pass the time.  I feel I ask this often, but how much better would this be as a 3DS release?  Short-term play with continued progression is fitting.  I’ve real doubts if being on Wii U will do this game any favors, especially with a free mobile version available.  On a console like Wii U there simply needs to be more substance.  While part of me commends a new dev not biting off more than they can chew, sights need to be set slightly higher, even for an endless game like this. 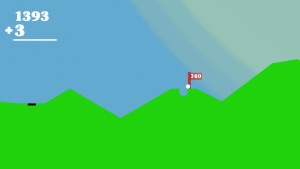 So close, yet so far.

Endless Golf has real concerns in multiple areas.  It could even be argued it’s not a game in the traditional sense, due to its curious structure and the aforementioned ways it comes up short.  And yet I keep playing it, which presents something of a conundrum.  I guess I’ll end by reiterating that while there’s no shame in simple,  Endless Golf is a bit too simple.  I do wish Fanttum Games success on their next project, but have to suggest that any curious check out the free mobile version of this game first.

I feel I ask this often, but how much better would this be as a 3DS release?