Welcome to Fairune, where illusion is reality.

Fairune is an action RPG with a decidedly retro feel.  You play an unnamed female lead, adventuring in a world overrun by monsters.  The world is bigger than I anticipated, and you’ll also delve both underground and into the skies.

The focus is definitely on the gameplay.  There’s no real story to speak of.  What very little exists is fantasy clichés.  At least the game pokes subtle fun at itself (“this is kind of custom around these parts”) and blends in some unexpected but welcomed sci-fi elements as things progress. 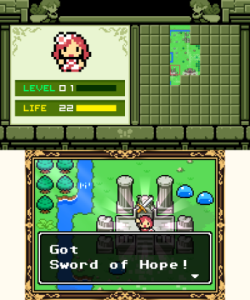 Combat is quite basic, but enjoyable all the same.  You simply charge into enemies, and your current level determines if you defeat them, earn experience, or take damage.  Grinding is necessary, but doesn’t drag out – the lack of complexities means it never becomes bothersome.  Control is good and responsive.

The retro feel extends to the audio and visuals, which offer a simplistic charm. The music is a pleasant throwback, well suited for a game this style.  An unlockable music player makes it even easier to enjoy these tunes, and is a feature I very much appreciate.  The retro pixel look meanwhile is very effective, and will bring a smile to the face of any 8-bit era gamer.  It’s colorful and diverse, with fine details and lots of on-screen enemies.  My only disappointment is that no 3D is incorporated, though the top screen map is helpful. 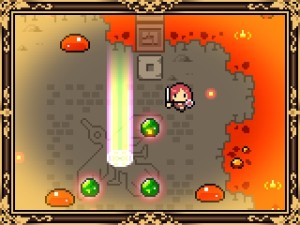 Fairune has an old school challenge.  Despite being linear, the sense of freedom granted you demands paying very careful attention.  You’ll backtrack well beyond the expected amount.  You’ll stare at clues at not grasp their meaning.  You’ll wander the map trying desperately to remember where you should go.  In fact the game nearly had me taking gameplay notes, something I mainly associate with gaming as a kid.  Strong nostalgia indeed!

One tip I can give in dealing with the difficulty is look at the electronic manual.  It has some helpful info to get you going, and full color pictures and screenshots.  A second tip is don’t be ashamed to consult a walkthrough when need be.  After some early progress (and just when you think you’re getting a handle on things) Fairune will trip you up with a hidden path or some other such design.  The game is tough! 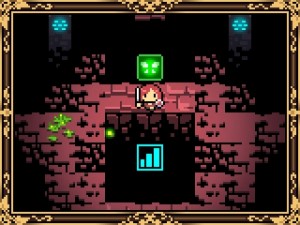 Fairune reminds me of the original Zelda in more ways than one.  The audio and visuals nods (though superior), the lack of direction, focus less on story and more on exploring and puzzles, etc.  Yet while tapping into that nostalgia, Fairune still feels like very much its own game.  I initially debated if it was too difficult to give a broad recommendation.  However since the challenge is primarily puzzle related, gamers can access a walkthrough and not be left to the mercy of their own reflexes.

I was surprised what a high quality, entreating game Fairune turned out to be.  It’s an ideal shorter (I beat it in just under 3 1/2 hours) adventure for a handheld like 3DS.  Yet it still has plenty of replay incentives through various achievements, collectables, records, and secrets.  With exclusive maps, puzzles, and the low $2.99 cost, Fairune is a must for action RPG fans!