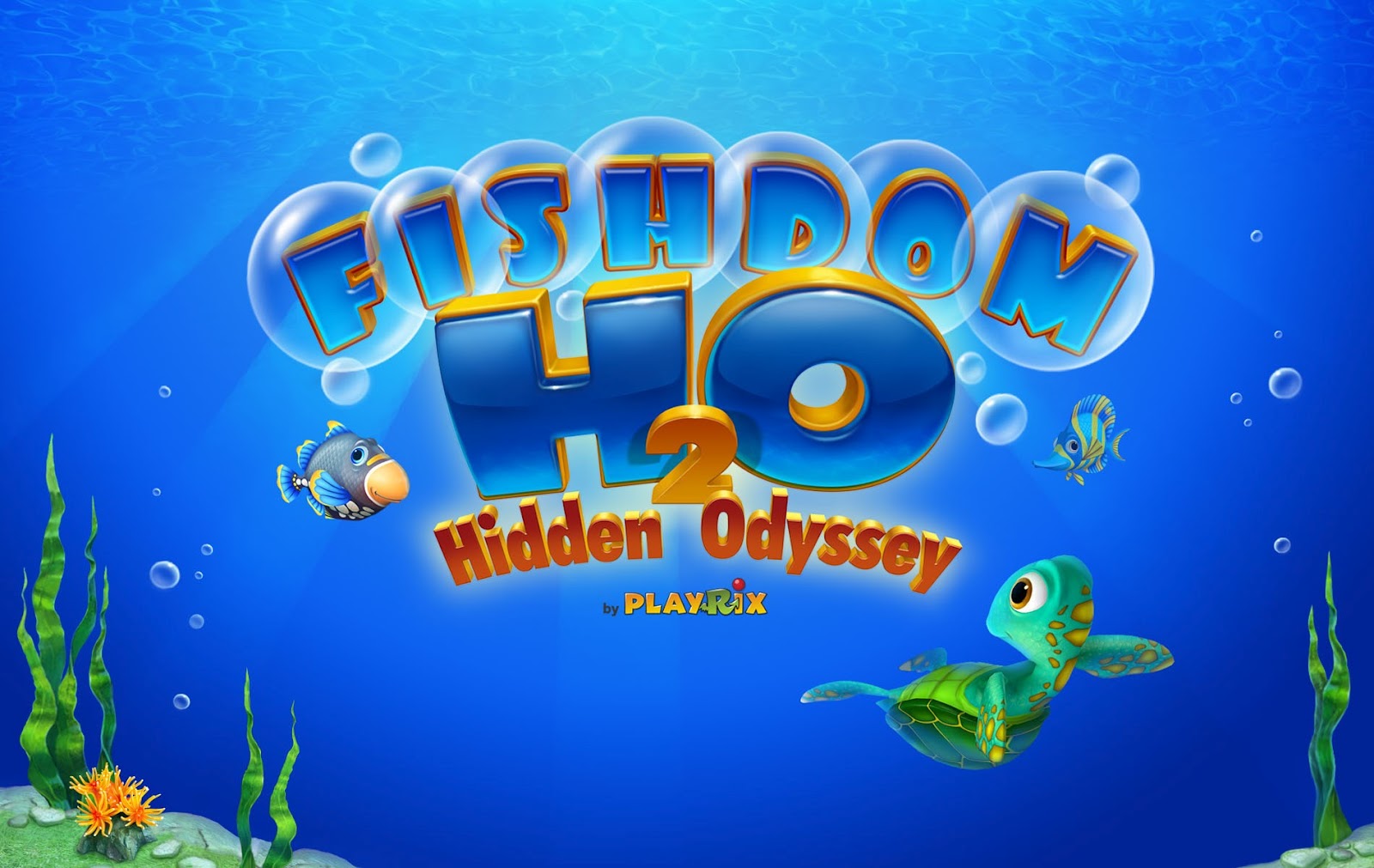 Hidden object games have exploded in recent years.  While the bulk of them can be found on the pc, video game systems are no strangers to the genre.  In fact, two of my favorite games of this style have appeared on Nintendo systems – MillionHeir on the DS & The Malgrave Incident on the Wii – both of the Mystery Case Files series of games.  Fishdom H2O: Hidden Odyssey (a port of an old pc game) recently swam onto the 3DS, where it attempts to be a big fish in a small pond of other hidden object games already available in the e-shop.

There is a very light story to tie your hidden item finding together, but it’s pretty weak.  It suffers from poorly written dialogue and below average voice acting.  Further, the character models are ugly, and there is very little animation attached to them.  Overall, it feels almost like an afterthought.

The game has some variety, though admittedly not as much as I hoped for.  More often than not you’ll be looking for a list of random items.  It does add a bit of spice to this by not always listing a specific item – instead it’ll just be a description such as “Holds valuables”.  One drawback to this though is there might be several items that fit that description, so you’ll find yourself clicking treasure chest, after wallet, after bag, until you find the particular one the game wants.  Other variances include finding a number of the same item scattered throughout, and lists of 3 items where you race to see which one you find first.  Don’t expect any other types of puzzles that are often seen in other hidden object games however – what you see in the first few minutes is what you get for the duration of the game. 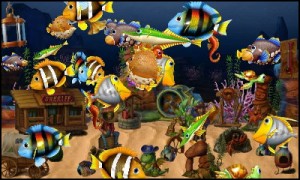 Of course the goal in finding these random objects is to collect cash to build aquariums.  This is a fine idea, but unfortunately it is very poorly executed.  For one, the aquariums already come partially built for you.  Second, the game will automatically decide where to place the items that you choose to buy.  This is a huge letdown!  When you consider that even many of the free, ad ridden, friend soliciting, hidden object games that populate Facebook let you place items, why can’t a $5 download for a dedicated game system at least do the same?  Lastly, your decisions in the former matters little, as you’re ultimately encouraged to buy every single trinket.  The whole draw of choice and creation is an illusion – the game creates the aquariums, not you.  And while they look really good and are fun to watch, it’s impossible not to be disappointed by how little input you are given in the process.

Stylus control is perfectly suited for this genre, so you’d think a game like Fishdom would control ideally on the 3DS.  Not quite though, since each item seems to have a “sweet spot”.   What I mean by that is you can tap on the correct item, but if you don’t hit it just right, it won’t register.  The larger an item is, the more this is noticeable.  A few times I’d use a hint, only learn the item was one I had already tapped. 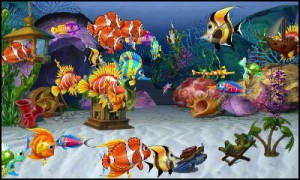 At most, Fishdom will take just a couple of hours to finish – It’s quite short.  The game encourages you to replay levels so you can earn additional money to buy more items for your aquarium.  It doesn’t take long though before it begin feel like time-consuming busy work, since you’ll be replaying the same levels over and over.  Plus, the aquarium items are expensive, which means you’d have to replay often to acquire everything.  And you are simply adding to existing aquariums you’ve already worked on, not building new ones.  Had there been download play, it would’ve helped extend the games life – cooperating or competing with a friend would have been a fine way to promote replaying levels.  Even giving you a choice of which mode you played would have been welcome.

While I had some disappointments with the gameplay, the visuals fared much better. They’re bright, and extremely colorful.  Certainly the variety of ocean life provides an excellent excuse to show off an abundance of colors.  The various sea creatures are finely detailed, and well animated. Given that the game takes place under water though, the visuals do tend to lack in diversity.  Still, what is there is done well, and the 3D effect for the aquariums in particular is quite impressive.  At times I preferred simply watching my fish tanks to actually playing the game. 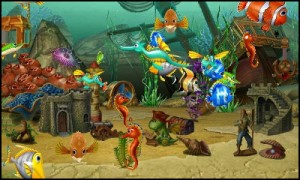 Along with the nice visuals, Fishdom is also accompanied by some fine music.  The game has very fitting, relaxing tunes, which I found quite enjoyable to listen to.  There are only a few tracks though, so eventually it may get repetitive depending on how much time you spend with the game.  But overall, the tunes are well executed, and a fine compliment to the game.  I found listening to the music while watching the aquariums was calming.

While Fishdom H20: Hidden Odyssey starts off well enough, it simply doesn’t evolve much past its initial offerings.  While fans of the genre will probably have some fun with this game, its aforementioned shortcomings (including an occasional bug that forced me to reset my 3DS) prevent it from being anything more than just an average entry in its class.