Is it Air Hockey? Is it Pinball? It’s Air Pinball Hockey!! 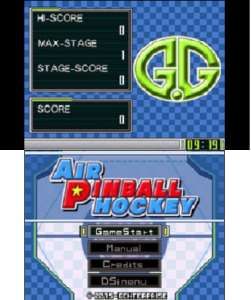 Another entry in the slew of recent DSiWare releases, Air Pinball Hockey is among the better G.G Series titles.  It takes two arcade staples and combines them into one entertaining package.  If you’re looking for an enjoyable little game to pass some time with, this is worth your consideration.

Being a hybrid, the stages in this game combine elements from both air hockey and pinball.  Some are more hockey oriented, such as scoring a certain number of goals on the computer opponent for instance.  Others are focused more on the pinball end, like reaching a specific amount of points.  Certain stages have you destroying objects on the board.  Some of them are stationary but require multiple hits, while others are moving but only need to be hit once.  All of the stages have an air hockey style puck and pinball type targets.  The action is kept varied, which is good to maintain interest. 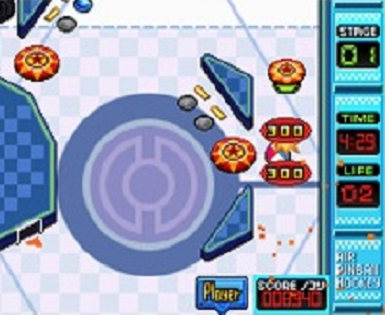 The game is a high score chaser, though it’s a shame there is just the one running total.  More than any other G.G Series title I’ve played, this game really would’ve benefited by having scores for each individual stage.  Nonetheless it is still very replayable, thanks to semi-addictive gameplay, and music that manages to not grow annoying, even with repeated plays. 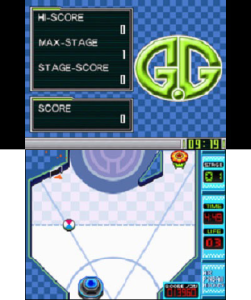 There are twelve stages in total, which is enough to make the game not feel too short.  So long as the timer doesn’t run out on a stage, it also suffices for the game not to overstay its welcome.  The timer is unnecessary (it rarely factors when I’m playing) but consistent with the other G.G Series releases.

The G.G Series games keep coming, and their quality certainly has varied.  But if you’ve been curious to check one out, this isn’t a bad little one to start with.  There’s really not much more to say – Air Pinball Hockey delivers what’s expected.  I wouldn’t mind seeing an enhanced version of this game designed for the 3DS.

If you’re looking for an enjoyable little game to pass some time with, this is worth your consideration.