Seven DSiWare releases on the same day – what year is this, 2010?  The G.G. Series has certainly made its presence felt of late.  I wasn’t too thrilled with the last title (WonderLand) so I steered clear of the shooters.  Ultimately I bought a racer by the name of Exciting River. 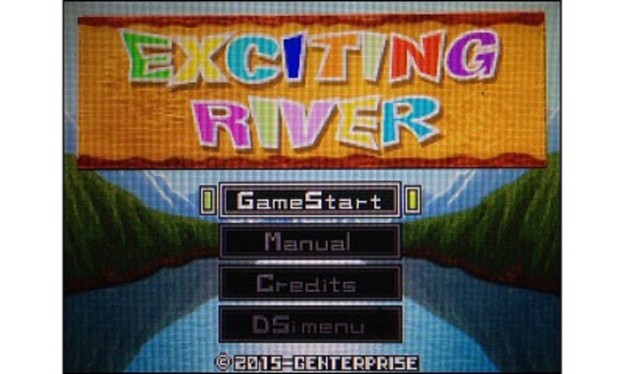 For a release with ‘Exciting’ in its title, could a more generic name have been selected?  Thankfully for this racer, it makes up for questionable excitement with some decent fun in a reasonably assembled package.  It’s basically a high score chaser.

There are ten courses to navigate.  The first five are normal, with the remaining five listed as hard.  These latter ones do present some more challenging obstacles.  There is a timer on all, though I view it as something of a lingering threat rather than a big dilemma.  Only once (course 10) did the timer prove very difficult for me.  Its main function is as a replay incentive.  Can you improve upon your best times? 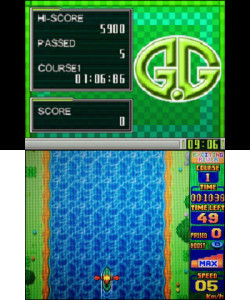 Besides best times (recorded on every course) there’s also an overall high score, and a total of how many rival boats you’ve passed.  So whether you want to spend just a few minutes on a couple of courses or try to tackle all of them in one run, there are totals to measure progress.

Your kayak controls in one of two ways.  You can tap left on the d-pad and hit the A button (corresponding to the left and right oar) or use the left and right shoulder buttons.  Both work well, and I certainly appreciate the choice.  The boost allows you to fly clean through most obstacles like logs and rocks.  You can replenish the meter, though when activated it will always run until the boat flips or the meter fully empties.  It’s all or nothing. 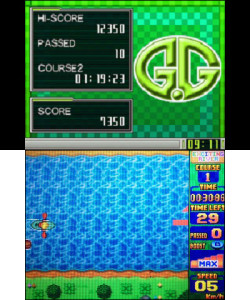 The game isn’t much to look at, but the graphics don’t detract.  The presentation is bright and clear, much better than the lousy press screenshots suggest!  The lone Irish tune that plays while racing didn’t get on my nerves, but listen to the video footage and hear for yourself.  The sound effects are fine.  Overall the presentation is that of an old budget DSiWare game, which matched the expectations I had going into it.

That’s about all there is to Exciting River.  I feel the amount of content and (especially) the replay value it offers is fair for just $1.99.  Exciting River is a solid little high score chaser, and a pretty fun late addition to the DSiWare library.  And DSiWare fans take note – more G.G series games are on the way.

Exciting River is a solid little high score chaser, and a pretty fun late addition to the DSiWare library.