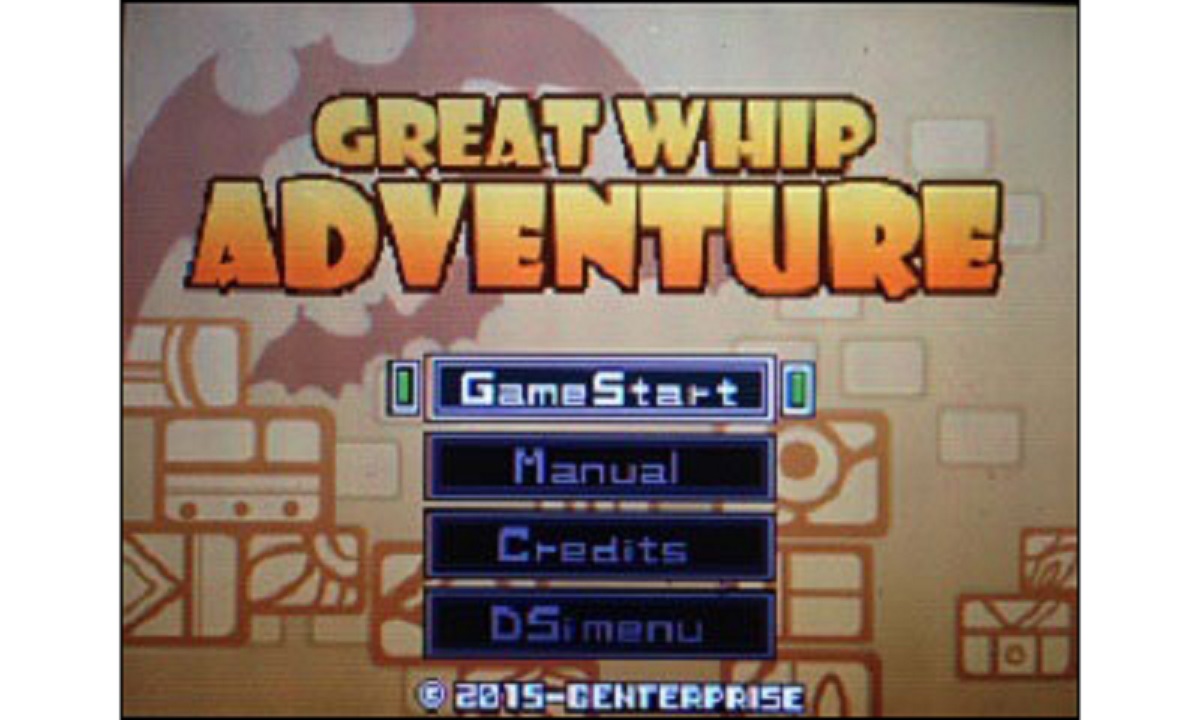 Why do I keep buying (and reviewing) DSiWare games?  I suppose it’s in hope of discovering a hidden gem.  In many ways I have with Great Whip Adventure, yet another recent G.G Series release with a terribly generic name.  Naming aside though, this is an admirable game with much to enjoy.

This is a puzzle platformer with more emphasis on the platforming end.  The action plays out with you controlling an Indiana Jones esque adventurer packing a whip as his sole means of defense. Enemies mainly consist of cartoony looking bats, but booby traps and environmental obstacles also pose threats.  The stages start limited to a single screen, but soon expand both horizontally and vertically as you search for the exit. 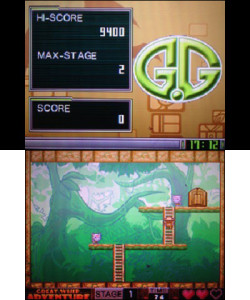 The audio-visual package is more varied than any other G.G. series game I’ve played.  The music is lively, and there are actually several tracks rather than just a sole selection.  Save the annoying siren sound if time’s running low, the audio is a success.  The diversity extends to the visuals also, with varied backgrounds.  You’ll start in a jungle environment, before moving on to a darker overgrown temple and finally an area bathed in purple light with some sci-fi imagery.  Sadly this isn’t reflected in the supplied press screenshots, but be assured the variety is welcomed.

Control wise things may be a bit slippery at times, but there is a fairly robust move set here.  For instance, you can alter your jumps in mid air, and adjust whip length for navigation.  Options such as these allow for some creative level design and enjoyable platforming.  The final ten stages are especially challenging. 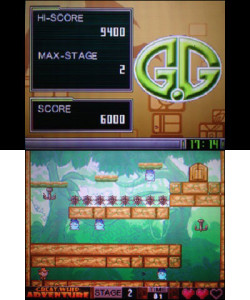 Great Whip Adventure took me just over an hour to beat, which is fair for its budget price.  There is no save feature (which doesn’t really surprise me) but a lack of a level select needs to be acknowledged.  Being able to start from every tenth stage or so would’ve been ideal.  Exciting River has a level select, why not this game?  Its absence makes this a less than ideal handheld title.  If you’re looking for a game you can play in quick sessions, look past this one.  If you don’t mind beating it in a single hour long sitting however, there’s good fun to be had here.

I suspect this game might’ve been a minor hit when DSiWare was relevant.  What type of audience it will find in 2015 and beyond I don’t know.  Hopefully some will take a chance on it though.  While the lack of a save/level select feature can’t be ignored in good conscience,  this is still a surprisingly well made game.  I had a lot of fun with it, and definitely recommend it for the low $1.99 price.