Helping me on this review is my lovely wife Jenn …

Jenn – From the title, Girls’ Fashion Shoot, you can infer that this is meant for girls who are into fashion.  But despite of the pink hearted decor of this game, you’d be surprised how wide an appeal it can actually have.

Trev – Wide appeal for the fairer sex perhaps, ergo why I invited you to give me some insight on this title.  To start with, the game seems to have lots of customization which is a plus – “Thousands of customization options to discover” according to the game overview. 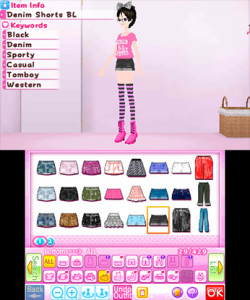 Jenn – The game lives up to its overview. It has options for styles that are bohemian, military, preppy, sporty, sweet, etc. the list goes on.  So don’t pass up this game for your tween, even if she’s gone Goth. The customization is tied together through conversations and the like, so a basic reading comprehension is needed.  Little girls who just want to play dress up may not be suited to this game. There is a dictionary though if you aren’t familiar with what a maxi dress or tartan plaid is.

Trev – That’s a good point, and it potentially could make an already small audience that much narrower.  Little girls won’t be able to fully appreciate it, while teens will perhaps find it too childish. Speaking of reading conversations, the characters don’t seem to have much in the way of personality do they?  A total lack of voice acting probably doesn’t help.  How do you feel about this?  Do you find the side characters lacking? 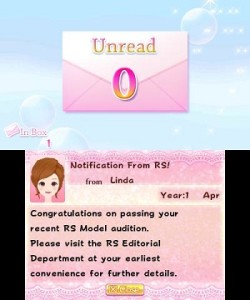 Jenn – I completely agree, but for this sort of title the focus isn’t on side characters much.  They serve their purpose.

Trev – The game looks and sounds pretty good in my opinion.  Do you agree?

Jenn – I actually ended up turning the music off as it kind of got on my nerves.  The anime type of look has lots of colors, but I don’t think the 3D added that much.

Trev – I find the game gets rather repetitive pretty quickly, especially when it came to the magazine editing.  Do you think that young girls might feel similar?

Jenn – Young girls probably wouldn’t see it as repetitive, even though they’re technically doing the same things.  There are enough options to make each of the tasks seem different.

Trev – Do you find the game to be user-friendly?  Could it perhaps be even too simplistic?  For instance “learning” poses is simply a matter of tapping an icon once. 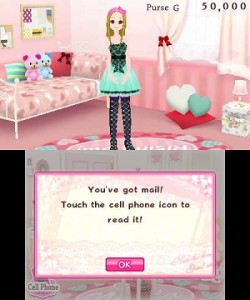 Jenn – For a younger audience the gameplay fits. GFS is crazy easy to follow.  It moves you along from the beginning to set up an avatar that looks as much or little like you as you please.  Your options after are highlighted on a map where you can buy makeup, outfits, photos, etc. to go for the look you want.

I think this a great way for tweens to try out different looks at an age when they are still trying to find themselves.  And every effort is commended with positive reinforcement. I wish I had someone to tell me that I put together a great look every morning.

Trev – Don’t I  tell you that you look great?  Anyway, while I can, and do, appreciate positive reinforcement, I think the game might pussy foot around mistakes too much.  For example, while you’re encouraged to change an outfit if it doesn’t fit the latest magazines target theme, you’ll still be told it looks great no matter what you end up doing.  Perhaps some type of difficulty setting would’ve been appropriate.

Jenn – You’re right but who wants a game that is based in reality. If the editor came up and said, “Wow, your work stinks. You’ll have to work overtime to fix it”, an already small demographic would disappear.

Trev – Fair enough.  My question is, will parents appreciate a game glamorizing modeling, especially when the have to shell out $30 for it? 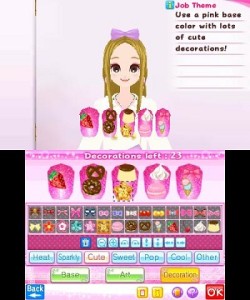 Jenn – Young girls will change what they want to be when they grow up every few minutes. This gives them a chance to play with the idea of modeling for the month that they have an interest in it. This also is coming from a woman who has no interest in modeling and views the game more like ‘practice shopping’. Will parents want to pay for it? It depends on their girl. If Shaq Fu can make any money then I believe in miracles.

Trev – I give you props for zinging Shaq Fu.  But at $30, parents should probably also ask themselves how long this title will hold their kids’ attention.  Would it be a month only, or perhaps even just a long weekend like I fear?  It’s a cute game and all, but I’m not sure its worth the asking price.  I’d have to only give a score of 6 out of 10 myself, but I’ll let you have the final word on it.

Jenn – There’s a chance that your assessment could turn out true but I’ll upgrade it to a 7 for the chickie side. Whether your tween sports a fedora or high heels I think she’ll appreciate having a private way to explore options in defining her own personal style.