“Visit Gothic Masquerade and find all its mysteries!”

With locales like “Cryptic Castle” and “Mystery Museum”, I expected to see Scooby and the gang wandering in the background.  Instead we have the same scattered items used in the other hidden object games from Selectsoft.  The reused assets stand out even more here, and contribute little to a scary atmosphere – the new ones are more campy than anything!  Laughs aside, there is a slightly mysterious tone showcased.

The tendency to use transparent effects for the concealed objects is a way to provide an extra element of challenge.  Prior it was used sparingly so as to not wear out its welcome.  Here it dominates though, and is very annoying!  No doubt it was meant to contribute to the mood, but it backfired big time.  It gives the appearance of lazier efforts. 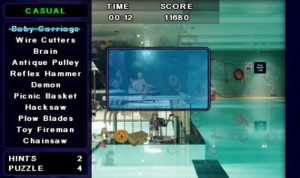 It’s not all disappointments though, with a solid soundtrack and new ‘spot the difference’ puzzles.  The latter were welcomed, and made me wish the other Selectsoft games included them.  They contribute to the diversity while adding a bit of length.  They’re used infrequently however.

At $4.99, this should’ve been bundled with one of its sibling hidden object games.  It is overpriced for the content, and can be found on mobile for $1.99 or less.  There are a couple of improvements, but they’re overshadowed by cons. 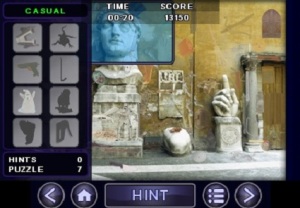 The theme, tendency to focus on transparent puzzles, and reused assets, weigh heavily here.  They make this the weakest entry yet, and one I don’t recommend.  Take a pass and grab another Selectsoft hidden object game if you want, like Foggy Valley instead.