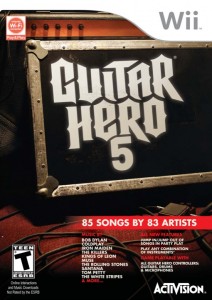 It’s that time of year again! No, not Christmas :/ It’s Guitar Hero [insert number here] release time! The latest in the Guitar Hero franchise, Guitar Hero 5, is now out and ready for the gaming masses. With new competitive gameplay modes, Roadie Battle (Wii Exclusive), and a solid track lineup, does Guitar Hero 5 sing sweetly? Or fall flat? Check out the full review below. 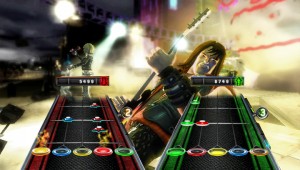 I’ve spent a lot of time with Guitar Hero 5 over the last couple weeks and can say that it is my favorite Guitar Hero version to play and comes complete with more gameplay modes and options than ever before.

Most of us are already familiar with the basic gameplay mechanics of Guitar Hero and music games in general. You have a series of colored notes that move towards you on the screen and you play those notes on the guitar, bass, or drums with the rhythm of the song. That’s basically the same in Guitar Hero 5, but now there are 5 new multiplayer modes that give different variations: Momentum, Streakers, Elimination, Do-or-die, Perfectionist, or Pro Face Off. You can choose which mode you want to do before playing, but each mode will give more points based on the streak, hitting all of the notes, and then changing the gameplay based on these criteria. If you miss a note, the notes may slow down or speed up and change the difficulty. There are also completely new ways of playing Guitar Hero now thanks to the Nintendo DS. 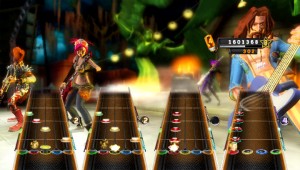 There are 2 main modes that can be played with the Nintendo DS, Roadie Battle and Stage Manager (part of Mii Freestyle mode). In Roadie Battle, you’ll be paired up with a friend or with a computer player and go against another Guitar/DS pair (the DS systems will hook up to the Wii using DS Download Play and download the Roadie Battle mode). The 2 guitar players play the songs as they would normally, but now the players with DS systems have the control over various ‘powers’, such as blowing the other players’ amps, speakers, soundboard, switching guitar strings, and igniting pyrotechnics. Basically everything that a roadie would do, only now it’s directed at your opponent. But it’s not all about finding ways to distract your opponent–you’ll have to do plenty of fixing on your end, because the other player will be doing the same attacks to your guitar partner. The DS is really perfect for these ‘mini-games’. For example, you’ll have to bust open the other person’s guitar case, break their strings, restring their guitar in opposite order, then place it into their hands from above! It’s really great, and a lot of fun! Easily the best addition in Guitar Hero 5, and this is exclusive to the Wii addition, naturally. 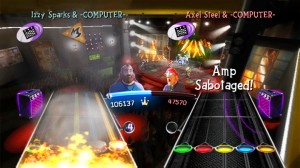 The Mii Freestyle mode also makes a return and includes a DS mode that allows players to control the stage lights, camera angles, and more all from the DS. Players can also record their play sessions in Mii Freestyle and share them with friends over WiiConnect24 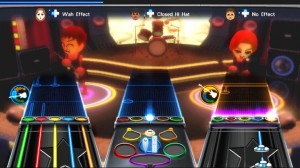 Graphically, Guitar Hero 5 is the best in the series for the Wii. Last year’s World Tour was a big disappointment graphically speaking. All the fonts were barely readable and jagged edges on polygons were everywhere–It was even worse when using an HD screen. Not this time around though, Guitar Hero 5 really shines! All the menus are nicely designed and compliment the feel of the game. Band animations are fluid and varied, and the frame rate never dipped in all the times I’ve played. It’s almost like Vicarious Visions was able to achieve better graphics and better performance, which deserves a big high-five! The 360 and PS3 versions always had the graphics advantage before GH5, but now the Wii version is really the definitive one both graphically and feature-wise. 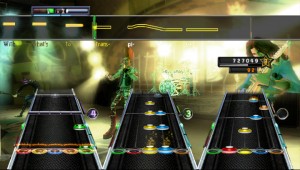 The track list features 85 songs from 83 bands including Muse, Kings of Leon, Johnny Cash, Bush, Brand New, Vampire Weekend, Blink-182 and many more! It’s really one of the best and newest series of tracks in a Guitar Hero game. In addition, GH5 features a much more healthy selection of DLC that really could rival the Rock Band music store. Right now there were about 120 songs, but it’s a good start and more are promised in the future.

Multiplayer modes this around can be done in Quickplay, Online, and Career just like in Guitar Hero World Tour; but now you can mismatch all the instruments. So if you and your friends want to all play guitars, or all drums, go right ahead! The game also makes it a lot easier to hop in and out of songs to change settings without having to go all the way back to the main screen. 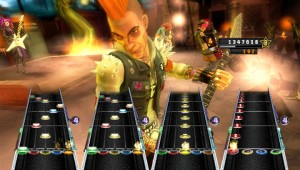 The online mulitplayer was a mixed bag for me. It was great when I was able to connect to someone and play, but out of the 30 times I tried to connect, I only played twice! It could be their servers getting hammered, but there’s no excuse for that. If nothing else, there should be 4 or 5 developers playing the game at all times :)

Guitar Hero 5 is the definitive version in the series, hands down. This version packs better graphics, more gameplay options, more multiplayer flexibility, better song list, and new modes! The new music store also shows a lot of progress over Guitar Hero World Tour, and shows signs of being updated on a more frequents schedule. All of this and more make Guitar Hero 5 the obvious choice for games looking for the latest music gaming fix.