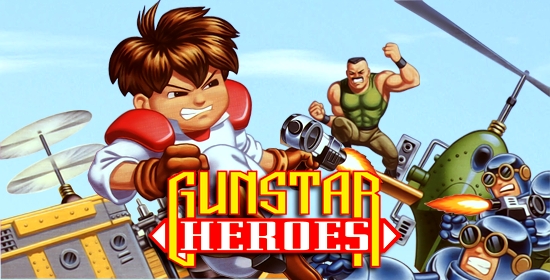 I’ll admit when I first picked up GunStar Heroes 3D, I was expecting the same virtual console experience that I had partaken in with the Wii version, only with 3D visuals slapped on that I wouldn’t use that much. What I got instead was a surprising amount of features that compliment the fast paced action that GunStar Heroes is known for, and the smooth gameplay runs excellent, even with the 3D on. 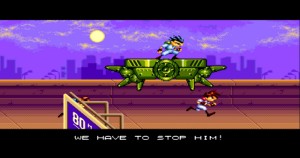 To start things off, GunStar Heroes is a 2D run and gun game that was developed by Treasure, and published by SEGA for the Genesis in 1993. The game pits you, the player, against the evil forces of Colonel Red, as you attempt to recover the stolen gems that are used to power the evil robot Golden Silver, a machine capable of destroying the planet. At least, that is the story given to players outside of Japan. One of the neat features of GunStar Heroes 3D is the ability to play through the Japanese storyline. While the gameplay remains the same, having the option to play through the Japanese tale is a nice and unexpected touch, and it’s this version that ties in to the game’s sequel.

GunStar Heroes was visually impressive for its time, and even today the fluid animations paired with the detailed character sprites are

a feast for the eyes. The 3D effect for the game is implemented very well, with certain objects being pushed into the background to create some nice depth. The 3D gives the game a fresh feeling, and the game retains its nice frame rate no matter the amount of action onscreen. You even have an option to make the 3D pop out instead of recede into the background, so you can customize it to your liking. The head tracking of the New 3DS does this game a great service, though, as the high amount of action may have you moving about unconsciously as you play, which will disrupt the 3D visuals on older models of the 3DS.

As you embark on your quest, the game play will definitely test your skill, as the game is fairly challenging. There are different types of shots to equip your gun with, and these include: Force, which fires a beam of plasma, Lightning, giving you the ability to hit your foes with electricity, Chaser, a laser dart that seeks out nearby targets, and Fire, a flamethrower type of weapon. Each weapon type 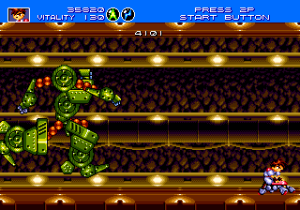 behaves differently, and you can combine two together to create combos that suit the current situation you’re in. It’s a simple concept, but combining weapons and smashing through waves of enemies is very satisfying. The game may be short with only a handful of levels, but mastering the difficult bosses will take some time.

For those worried about the difficulty, there is mega life mode. This option will allow you to start the game with twice as much health, and it’s a great way to ease your way into the game. Want even more control? Gunslinger mode lets you switch between your weapons on the fly, and changing between the fixed and free firing control types the game has to offer is as easy as hitting the X button in this mode. You can even bring along a friend in a two-player co-op mode, so long as you both have a copy of the game and you select the local play mode. 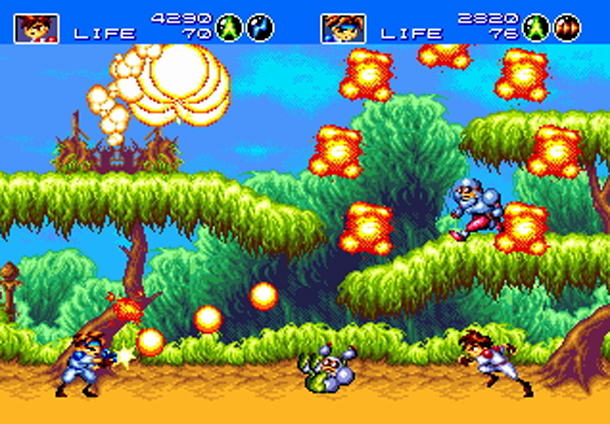 What I thought would be just another virtual console release, ended up really impressing me with the amount of customization that is available to you. Being able to tweak the difficulty makes the game more accessible to everyone, and gunslinger mode gives veterans a new level of control. The graphics look great and run smooth with or without the 3D, and the music is fast paced to suit the action of each level. Multiplayer is a plus too, even if it’s only for local play. If you’re a fan of side scrolling shooter games that test your reflexes and skill, or even if you’re a veteran to the series, this is a title worth adding to your 3DS’ virtual console lineup.

The smooth and challenging game play, paired with the awesome visuals and customization options makes this a great title for the 3DS.