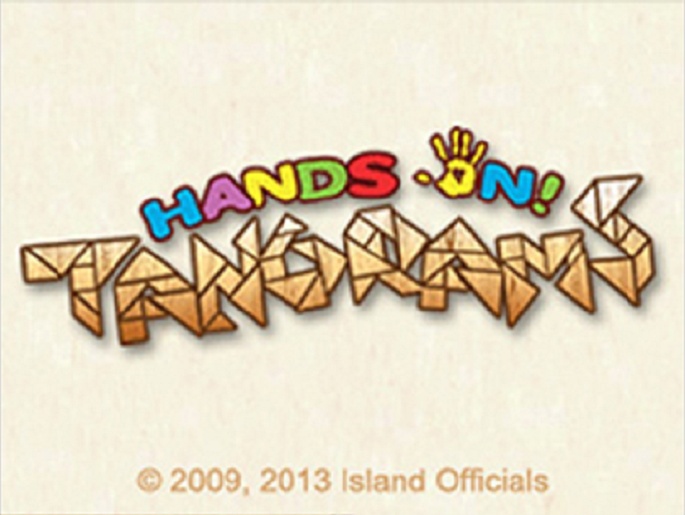 Hands On! Tangrams is yet another recent DSiWare download that first saw life years earlier as a physical release.  I knew this would be a good game even before I redeemed the review code, as I’d actually purchased it at retail prior.  Playing it again gave me the opportunity to see if my favorable memories still held up.  I’m pleased to say that’s the case – this is a quality game, well worth considering.

For those that are unfamiliar, tangrams are puzzles where you try to form a specific image using seven basic shapes.  In this digital version, a displayed outline will come to life on the top screen when correctly formed, filling it with a variety of themed characters and objects.  The premise is quickly grasped, even if you’ve never played these types of games before.  And while some of the puzzles are quite easy, a handful are surprising head scratchers. 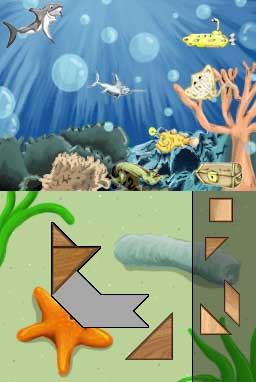 The game uses a combination control method, with the stylus used to drag and place pieces, while either the d-pad or buttons rotate and flip them (ideal for right or left hand play).  It actually works out quite well, and proves to be very responsive.  I’ve no real complaints with the control setup as it makes everything quick and easy.  Speaking of which …

Quickness is important here, as you can earn stars depending on how fast you finish a puzzle. While bronze and silver are good, the drive to ultimately see all gold is what gives this game the bulk of its replay value.  I have heard this area criticized, the argument being that once a puzzle’s solved you already know the solution.  This type of reasoning may fly on paper, but quite frankly it crumbles in practice.  Honestly, it’s a stretch to think anyone will actually remember the solutions to every puzzle they didn’t get gold on the first time!  I suppose if someone immediately exited the main game after finishing a puzzle, returned to the starting menu, selected Free Play, and picked the very same puzzle they just finished, that argument could have some merit.  But really, who would want to play that way?  They’d just rob themselves of the satisfaction that comes with quickly solving a tough puzzle.  For those thinking the game has no replayability, the failure’s with them, not the game.

Even though this is a game for any age, the colorful and admittedly simple visuals indicate that it’s primarily aimed at kids (certain versions of the retail release actually had the “BRAINSTORM SERIES” banner).  But you need to remember this is a DS game, not a 3DS one.  It has a cute art style, the animations (though very simple) are pleasing, and the various themes give the game some pleasing diversity as you move from a jungle, to a park, and even outer space. 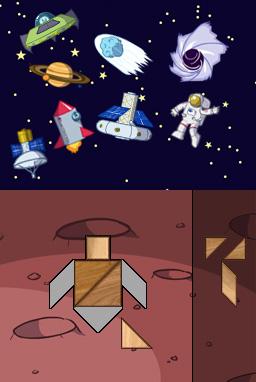 Hands On! Tangrams has some superb music tracks, making this one of the areas where the game shines brightest.  There is a separate track for most of the themes, and they all fit very well, providing a splendid compliment to the game.  My personal favorites include the Deep Sea, City/Park, and Sports tracks.  The tunes are fine enhancements, and I congratulate the composer(s) on a job well done.

Other than the appeal of tangrams perhaps not being as widespread as other puzzle games, varying by region, the biggest knock to this version is the amount of content.  The one hundred puzzles are fun, but will only keep you occupied so long.  This is somewhat mitigated by the low cost – at 500 points there is only so much one can reasonably ask for.  Still, I do wish the asking price was lower.  While it’s more than worth $5, the eShop has long since passed DSiWare as a focus for gamers.  A lower price point could make this game, that might easily be overlooked, stand out more.  Still, I reiterate that it’s worth the cost (I paid more than double for the retail version).  And this is a polished package, which demonstrates how a short finely tuned game is better than a lengthy but sloppy one.

I enjoyed Hands On! Tangrams when I bought it retail, and I enjoyed it again while reviewing this downloadable incarnation. Even though it’s aged in four years, it’s still a fun, charming title that could serve as a pleasant, inexpensive introduction to tangrams.  And it could also serve as a warm up for the upcoming DSiWare/3DS eShop game Orion’s Odyssey: A Pattern Blocks Adventure, which takes some of the concepts, elements and ideas seen here (along with some characters) and, expands upon them in a new adventure.