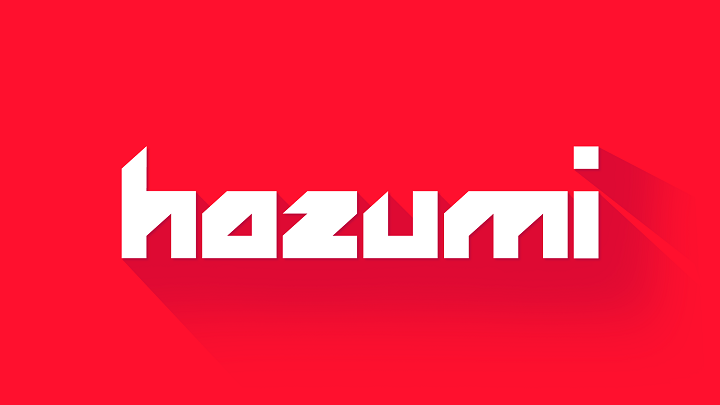 Hazumi caught me slightly by surprise, sneaking in amongst other eShop releases with little fanfare.  Which is a bit of a shame as this is a very respectable little download that fans of action puzzlers should enjoy.  It has some issues for sure, but the core package is still quite solid.

Maneuvering a ball to destroy on screen blocks is as familiar as can be, yet Hazumi puts a twist on the time-honored formula via a control tweak.  Paddles are nowhere to be found – instead you have direct steering control of the perpetually bouncing ball.  The control is a bit sensitive (and the ball slightly unwieldy) but this adds a fresh spin while providing ample challenge. 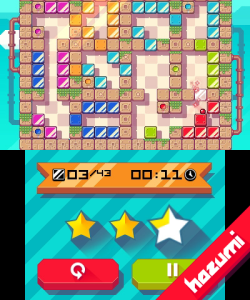 The blocks in Hazumi vary in color, and only a matching ball can eliminate them.  Not only is this a great touch, but it makes the game a very colorful affair.  On top of that there are obstacles that can destroy you with just a single touch.  Helpful objects also become available though, like teleports to assist your movements.  A sense of timing is definitely needed, as is planning ahead through careful observation.  The challenge is refreshing, although it’s high enough that less experienced gamers may want to steer clear.  I’ll elaborate …

The game uses the star system, a common replay incentive I typically appreciate.  Here it’s based on how quickly levels are finished, and you’ll need a very high number to advance.  Unlocking just four levels at a time, you’ll need 10 of 12 stars to move forward.  The sad reality is that (for some) the bulk of content may remain locked out and never seen.  The game does brag it’s “*SO* unfair” so this is true to form, but ultimately I think it does more of a disservice.  The game deserves a larger audience. 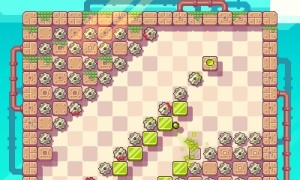 Going back to earn more stars is also clunky, due to a design oversight.  You’ll need to first hit the home button, than be prompted to play, next select the yes icon, and finally slowly scroll back to return to earlier levels.  The more this repeats (and it’ll repeat often) the more annoying it becomes.  It reflects a need for a bit more polish.  The camera does also – at times it can’t pan quickly enough to keep pace with the moving ball. 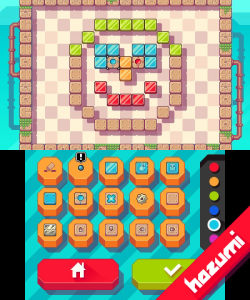 Hazumi has a level editor.  I’m usually a big fan of these, and that’s certainly the case here!  It does have some pros and cons naturally, and  I’ll get the cons out of the way first – you can only save up to a dozen levels,  there’s no QR codes or other sharing means, and returning to edit saved levels has a similar clunky setup that replaying levels does.  That said, the level editor is very good!  I was impressed how functional it was, and I managed to have a working level up in little time.  It’s fully fledged too, with seemingly no limits on what you can do.  Creative types will have a blast, but even the less imaginative will probably have some fun with it.

Despite some real concerns, Hazumi earns my recommendation thanks to putting a fresh spin on things.  Good puzzle games aren’t in short supply on 3DS, but this one manages to feel unique.  It’s also a colorful game, with enjoyable music, and a high challenge.  With over 100 levels and 300 plus stars to collect, there’s plenty of content for the low $3.99 price, assuming you can unlock it.  Add in the nice level editor, and the content is even greater!  While a lack of difficulty options makes it impossible for me to give it as broad a recommendation as I would’ve liked, Hazumi is worth a long look for the skilled action puzzler fan.

Hazumi is worth a long look for the skilled action puzzler fan.