Hideaways: Foggy Valley is very similar to City Mysteries, Selectsofts’ prior hidden object game that I reviewed a couple of months back.  In fact, if you put the games side by side you might be hard pressed to tell them apart.  They both have the same presentation, puzzle types, and (for the most part) the same pros and cons.  Is the change of locales sufficient to make this new game worthy of a recommendation?

Foggy Valley’s visuals retain the clarity of the former, and while that’s appreciated they seem to fall short in imagination.  Whereas City Mysteries at least had some famous landmarks, nothing particularly stands out in Foggy Valley.  At least the settings are pleasant enough, as you scour the forest, hills, and other scenic locales. 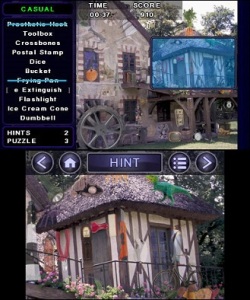 Music is one area that has seen improvement.  City Mysteries had environmental sound effects only, but Foggy Valley has an actual tune.  It gets repetitive and can play sporadically, but I still appreciate what it brings to the game – best described as “ruddy mysterious”.  Other improvements include more responsive control, and no glitch encounters.

Foggy Valley maintains the status quo when it comes to content.  Like City Mysteries, it’s quite short.  Replay is more to find new items, and less to get a faster time or more points.  With readily available hints that show you the exact location of items (and offer no point penalty) Foggy Valley doesn’t present much of a challenge, even with a timed mode. 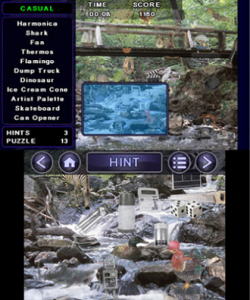 Like the prior title, genre fans will get some short-lived fun here, but may want to wait for a sale due to the games brevity.  I’d like to see Selectsoft aim higher, with more content for these releases.  I’ve reviewed better hidden object games on the eShop, but there are just enough differences and improvements here to make me score Foggy Valley a bit higher than City Mysteries.  It’s still just an average game, but an enjoyable enough way for fans to pass the time.