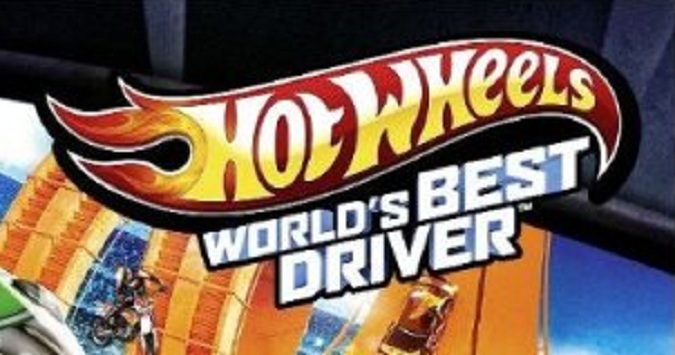 Licensed games tend to have a bad reputation.  Hot Wheels: World’s Best Driver unfortunately reinforces this notion.  Had it been a $5 download I could be more forgiving, but for a $30 retail release I expect much more than this disappointing offering, and so should everyone else.

To begin, after navigating cryptic menus, the clunky interface has you driving around to make selections.  This approach rarely works as hoped, and usually ends up as an annoyance.   In this game’s case, it’s also annoying due to the sad reality that the driving area is so mundane and lifeless.  And it isn’t isolated, as most of the early levels also take place in dull colored, boring and very bland environments, that almost look unfinished!  It leaves such a poor first impression … 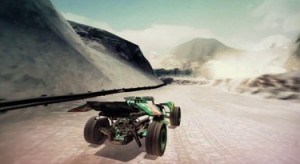 There is plenty more to leave a bad taste in one’s mouth.  The music for instance, is quite generic and weak.  What few decent tracks there are seem out of place, and are repetitive.  Copious amounts of voice acting are included, perhaps in an effort to bolster the remaining audio package … But why were assets focused on this feature?  A game like this doesn’t really need voice acting, and I ended up skipping it when I could. There’s also annoying load times, and frustrating slowdown present.  Perhaps worst is the loose control, which had me struggling from the get go, and continued throughout the whole time I played the game!

Even if the game controlled well though, the actual gameplay is just boring in my opinion … and just to be clear, it isn’t even really racing, with the focus being on stunts, jumps, and various tests.  Multiplayer would have spruced it up (sadly missing) but the core game just wasn’t engaging enough, at least for me.  Replaying to earn medals fails to be much of an incentive when the stages aren’t even enjoyable the first time through. 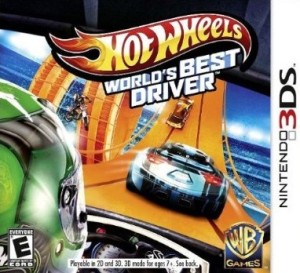 And there are a number of oddities.  Some stages I’d finish and stare at the screen bewildered, wondering how I possibly could have cleared it since I crashed repeatedly (again, bad controls!)  Other times I get an award on a stage only to find out I failed!  And by default, you’ll  replay the same stage over and over again unless you pick otherwise.

Some gamers (kids) may find this title ok, but I unfortunately didn’t.  It failed to call to mind fun times I had with Hot Wheels when I was a child.  Too bad, as there are actually some interesting ideas here (such as different racing teams with certain unique challenges) and they might be worth revisiting if given the care they deserved … perhaps the home console versions are better?  This 3DS version however probably isn’t even worth a weekend rental.  Sorry.