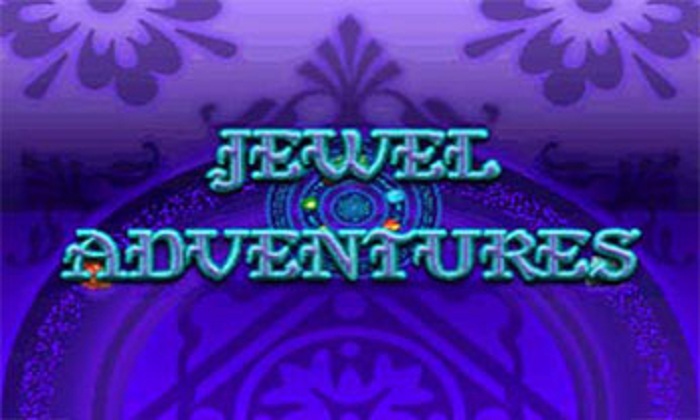 A great war, a kingdom in need of rebuilding, monsters to battle, and treasures to collect, all in a fantasy world.  A fairly simple story for an RPG, but a pretty epic tale for a puzzle game.  Which doesn’t mean the clichéd story is good; honestly, it is so unmemorable that I’m forgetting it as I type.  But the story itself isn’t really important … what is important is that serves as a means to wrap adventure elements around  the common (but popular) Match-3 puzzle mold.  And Jewel Adventures manages to pull off this balancing act very well.  As a result, it’s able to do things other Match-3 puzzle titles simply can’t.  We are left with a game that’s every bit addictive as the best of its contemporaries, but with a great deal more variety. 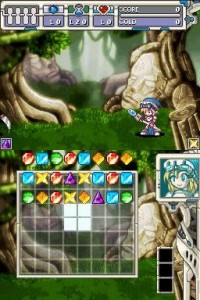 The quicker you are able to match up the gems, the sooner you can eliminate the slowly advancing monsters on the top screen.  It isn’t just all speed however, as the colors you match will determine how effective your attack against an enemy is.   The potential of deeper strategy is very much present for those looking for something even further beyond a typical game of this type.  It adds a much welcomed layer of depth to the proceedings.  The fantasy setting also gives the game a level of excitement that comparable titles lack, and has made me stick with it much longer than I might otherwise.  The feeling of progression helps eliminate the repetition that inevitably sets in with similar games (and their subsequent sequels and spinoffs) that end up feeling stale.  Jewel Adventures is a very refreshing take, and its goal oriented gameplay should  definitely try to be emulated by any looking to tackle this crowded genre.

Classic mode is for a single game, played for as long as you can keep leveling up.  But if you want to sink your teeth into something more substantial, master mage mode is it.  Here you go through 25 missions, with over 200 levels among them. While classic mode has some depth all its own, this mode goes well beyond even it.  Here you’ll need to do things like match gems that are in specific locations, eliminate a certain number of a particular color, defeat a quota of enemies, and then some.  One objective I especially like occurs during the last level of each mission, when you need to collect falling artifacts through skillful navigation of the game grid.  It throws a nice twist into how you play, and is limited enough that I looked forward to the next opportunity. 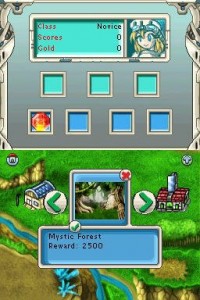 You can also acquire the means to destroy gems without matching them, temporarily stop the timer, explode entire rows of gems, change the colors of individual gems, and other helpful abilities.  These will take some practice before you know how and when to use them most effectively.  You are rewarded with money for your success to build helpful structures on the map, further adding to the games RPG vibe.

The game’s plenty challenging, so if you’re a puzzle newbie be prepared for some difficult levels.  The aforementioned abilities can help knock the difficulty down however, which will probably appeal most to those unfamiliar with Match-3 games.  For more experienced puzzle fans though, these actually make the game less of a pure puzzle experience.  You can still have success and make progress without using them, but its something the game’s really designed around.  Plus it is hard to ignore the helpful icon in the corner and not spend your points to use it.  Whether you find these a big plus, are indifferent, or prefer the game without them, will probably be based on your experience level.

Jewel Adventures offers plenty of enjoyable visuals.  There’s very good variety in enemies, including some bizarre ones (walking vegetables!) and an even greater mix in the detailed backgrounds.  Speaking of which, the backgrounds attractive, almost hand painted appearance, is so well done that it really helps to set a fun atmosphere!  Good use of color and lots of nice little details show a level of care that reveal the game’s origins as a boxed retail release in Europe.  My only nitpick is that the jewels on the touch screen are a bit cropped … play on an XL model if you can. 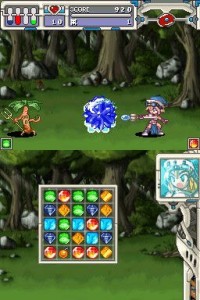 The music fares just as well.  It fits nicely with the game’s atmosphere, and wouldn’t seem out of place in an actual RPG.  It certainly added to my enjoyment while playing, and the intense grinding tunes that play during the levels gives the game a feeling of even more urgency.  Everything from the pleasant menu tunes, to the relaxing  music that plays while navigating the map is well executed, making this a game that is almost as fun to listen to as it is to play!

Even after putting many hours into this game, I feel as if I’ve just scratched surface.  The amount of content goes well beyond expectations for a downloadable puzzle title, and the replay value is that much stronger because of it.  The fact that (for all the hours I’ve put into it) my activity log shows my average play time with this game is over 1 hour (2nd only to Animal Crossing) speaks highly about its addictive nature.  It’s very easy for me to suggest that puzzle fans purchase this game, and perhaps even RPG fans as well.  The latter will get a kick out of the fantasy settings, the former will appreciate how it used to pack a simple game with enough unique elements to keep them hooked … even if they’ve already mastered their share of Match-3 games.