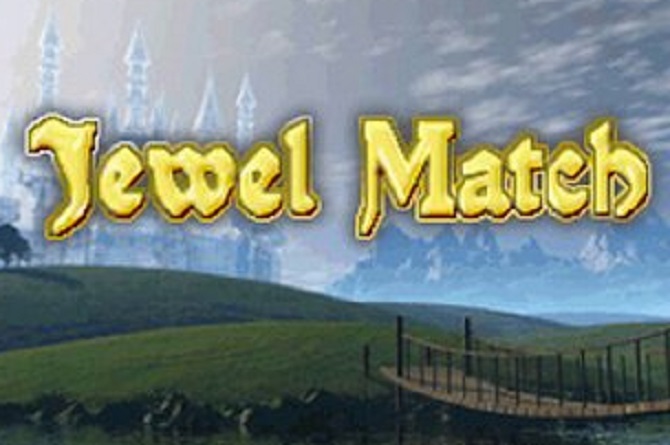 Who doesn’t know the match-three game? I’ve reviewed several of these titles for Pure Nintendo and played even more.  Despite their simplicity, repetitiveness, and overabundance I enjoy them.  They make for nice stretches of entertainment between more robust offerings.  The danger of growing stale however is very much present.  While it isn’t really this title’s fault that the market’s jam-packed with these games (they’re well liked after all) the reality is there’s myriads to choose from.  What does Jewel Match offer that makes it worth considering? 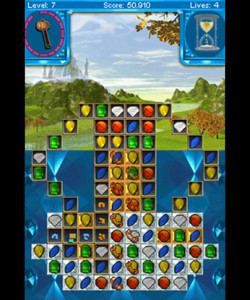 This game is typical in many ways.  To describe it as a plain old match-three game may not be flattering, but it’s not far from the truth.  Does anything in particular stand out?  No, not especially.  It’s mostly minor variants of familiar features.  Overall there isn’t a great deal separating this game from the pack.  However the way it combines elements makes it slightly better than the sum of its parts.

Jewel Match offers a higher level of challenge compared to many other match-three games.  Clearing jewel covered tiles while watching the timer, and fighting with locked gems while trying to avoid matching boulders makes this game go beyond just a simple way to pass the time.  A relaxed mode (sans the clock) and a multiplayer hot seat mode offer further variety.  While it’s easy to write the game off as more of the same, it should be acknowledged that it does include some features that comparable games miss – multiple profiles is another such example. 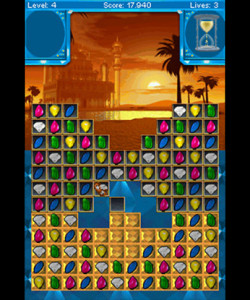 The visuals in this game are quite colorful.  All of the jewels are well-defined (with spinning animations) and the static locales on the upper screen provide a pleasant bit of atmosphere. The fact that the jewels stretch to fit both screens is pretty cool too, as many comparable games limit them to just the bottom.  It allows for larger sized jewels and a further layer of strategy as you have to slowly drop them down to a low enough usable point.  For DSiWare, this is a nice looking release.

The audio consists of musical tracks that wouldn’t sound out of place on one of those relaxation compilation CDS.  It’s well-suited when taking time out for a few quick puzzles, and feels at home for a game like this.  Solid sound effects round out the audio package. 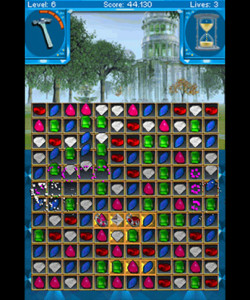 Jewel Match is advertised as “A classical Match 3 game!”, and sure enough, that’s what it is.  It’s not out to energize the formula – it sticks with what works.  Joindots is known for publishing easily understood games, so it’s clear why they’re attached to Jewel Match.  The formula’s very accessible, and has a proven audience accustomed to its charm.  For better or worse, Jewel Match plays it safe.

Jewel Match is a challenging puzzler.   It doesn’t offer much new, but what it does have is done fairly well.  With 150 levels, you’re given a good deal to play.  If you’re still a DSiWare fan, you’re no doubt missing new releases, so Jewel Match should be welcomed in that regard for its better late than never arrival.  It doesn’t give match-three games a shot in the arm, but it might for the waning DSiWare library.  With the few remaining DSiWare titles also being cut from the match-three cloth however, this game may have a hard time standing out, even with its captive audience.