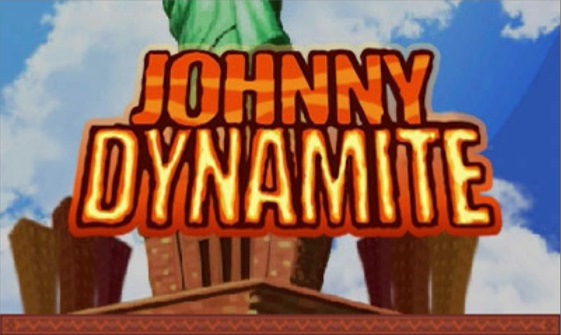 Johnny Dynamite is the type of game that I have a love hate relationship with. While I think the game has potential to be a lot of fun, it really misses the mark at times when it comes to being a fulfilling gaming experience. So what did developer Enjoy Gaming Ltd do well? Where did they blunder? Lets dive right in to find out. 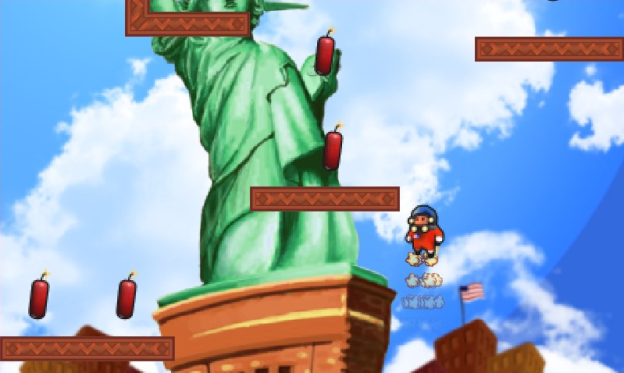 Right of the bat, I had good vibes coming from Johnny Dynamite. The game is an action platformer that tries to throw in puzzle elements when it can. You play as Johnny Dynamite, a jetpack wearing bomb diffuser, and it’s your job to fly around the stage destroying aliens as you collect sticks of dynamite before they explode. The game initially reminded me of the arcade classic, Mighty Bomb Jack, and that definitely is a good thing.

Each level has a timer that will deplete as you make your way through the stage. Beat the stage quickly enough, and you’ll earn three stars and move merrily on your way. The slower you are, the fewer stars you’ll earn, and if you let the timer run out, the remaining TNT in the stage will explode, and you’ll have to start the level over. While the idea of challenging the player to beat the levels faster makes for some nice speed run-esque game play, the stars you earn serve nothing more than to say you’ve completely beaten the level. I found this really disappointing, and I feel the game missed an opportunity to include unlockables such as new suits, jetpacks, or weapons. 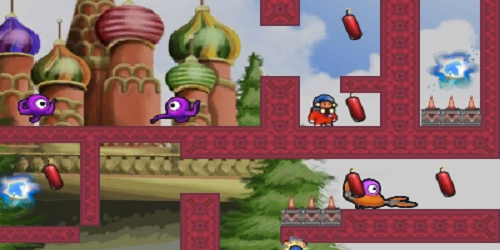 Perhaps the biggest problem I had with Jonny Dynamite was the level design. While the game’s story mode gives you 54 levels to complete, the levels themselves are very linear, and lack any real personality. Some levels even sink so low as to place only a single stick of dynamite for you to collect, and these levels can be beaten in a manner of seconds. While there are aliens in most of the stages that serve as enemies, it’s very rare that you’ll need to use your own dynamite attack (This is done by pressing B or holding it down longer to increase your throwing distance). Instead of being a part of the game’s challenge, enemies usually just become a backdrop with the scenery as you zoom through the level.

Some levels include warp panels, and flying into these will transport you to another area of the level. Other hazards include spikes that spring forth and retract periodically, and electrical currents that serve as an insta-death blockade until you shut them off. While the hazards may be few, there are still enough ways to create interesting scenarios for the player to have to maneuver through, but again the game rarely uses them in clever ways. All the hazards remain static, and even adding moving obstacles could have really given this game much-needed flavor. 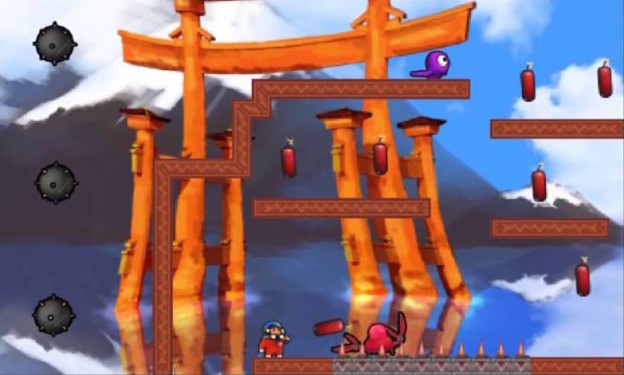 The story of Johnny Dynamite was unknown to me until I discovered it was located in the game’s digital manual. The story goes that the evil Dr. Osmium is tired of being the world’s second most evil genius. In an attempt to seek revenge on all who mock him, he has rigged famous landmarks around the world with explosives. It’s up to Johnny Dynamite to disarm all the explosives and thwart the evil doctor’s plans. While I don’t expect a masterpiece of a story from this game, a cut scene or an intro with some text would have helped explain why I was collecting all of this dynamite. It’s also important to note that after beating the final level (There is no boss battle) the game offers no fan fare or ending credits of any kind, and simply asks you if you want to retry the level. All in all, it only took me an hour to clear all the stages with 3 stars each.

Visually the game is nothing remarkable to look at, but it does its job well enough, and it’s about what you’d expect considering the price range. The music, however, is severely lacking, with only a couple of tracks for the entire game. 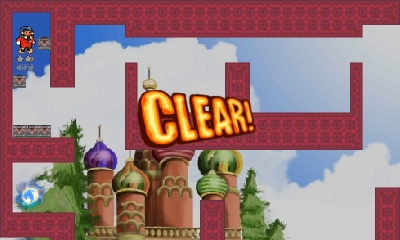 If you’re going to spend more than an hour with this game, then it will most likely be with the game’s edit mode, and I found this to be Johnny Dynamite’s strongest virtue. You’re able to save up to 24 custom levels, and you can send and receive levels by creating and sending QR codes respectively. The editor is very simple to use, and the game gives you all of the assets available so you’ll be cranking out levels in no time. If you’re a creative type who enjoys level editors, you could definitely have some fun with this mode. 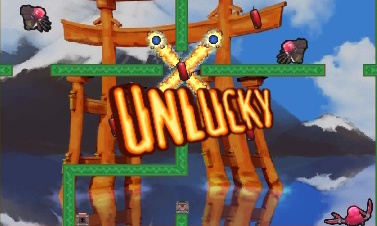 At the end of the day, Johnny Dynamite could have been so much more if the developers had pushed the game further. While the game controls well enough and has a pretty fun premise, the absence of story telling, the lack of music or compelling visuals, and the poor level design really drag this title down and keep you from enjoying yourself. The level editor may have been a nice inclusion, and is definitely Johnny Dynamite’s biggest selling point, it’s hard to recommend this game at its $4.99 price tag when it feels like a ¢99 smart phone game. This one is definitely a title to pass up.

While Johnny Dynamite’s game play has potential to be a fun experience, the game’s lack of creativity sucks any joy you’d get from the title. The level editor is the game’s only saving grace.