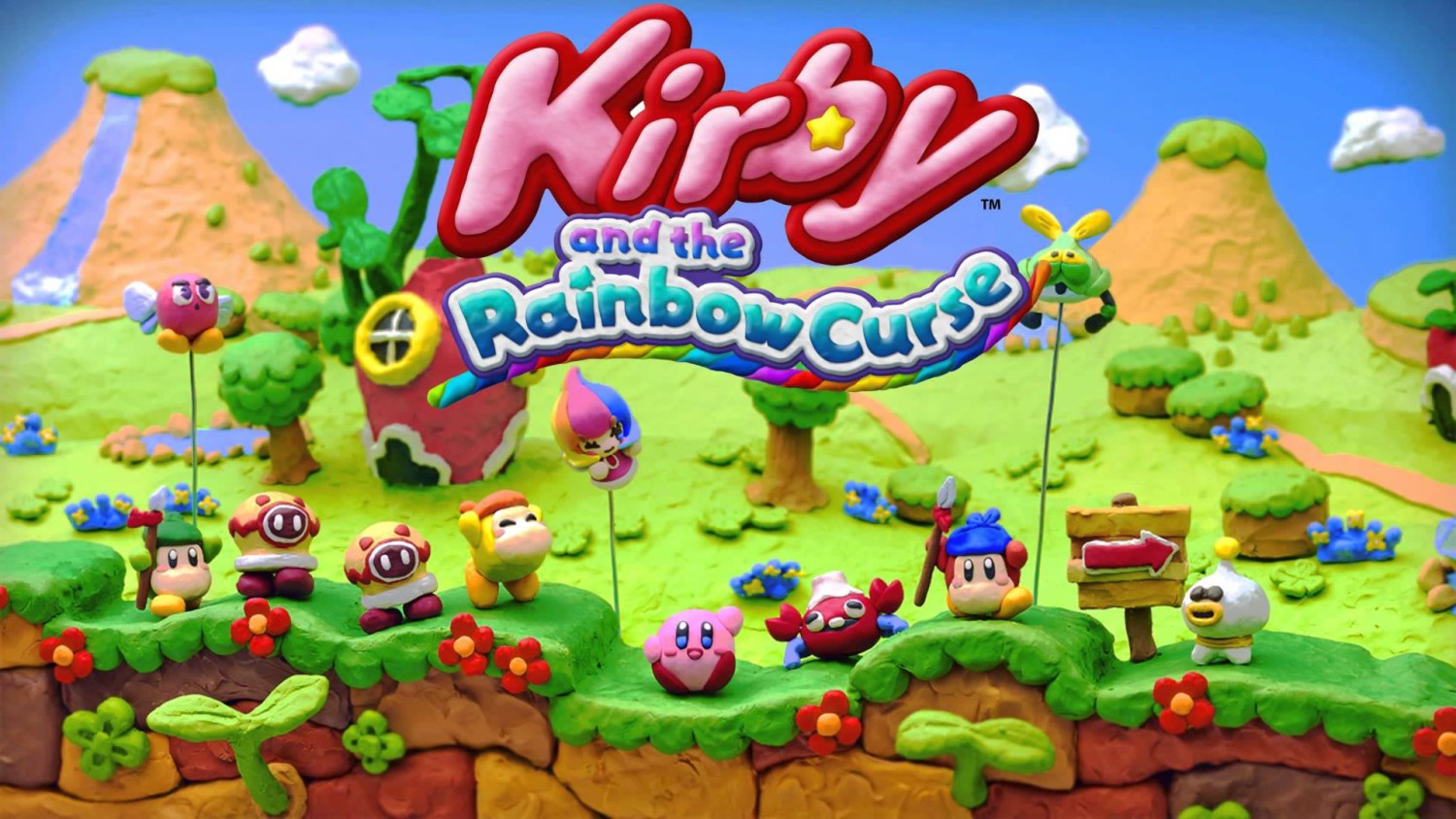 When Nintendo first showed off Kirby and the Rainbow Curse, I was both excited and puzzled. While I couldn’t wait for a return to the game play of Kirby Canvas Curse, I found it odd that Nintendo decided to publish this game on the Wii U rather than the 3DS, which seemed to be the obvious platform of choice. Once I booted up the game, however, it was clear that Kirby’s modeling clay art direction had to be seen in HD to be fully appreciated. So without further delay, let’s take a trip to the planet of Pop Star to see how Kirby and the Rainbow Curse shapes up to its predecessor. 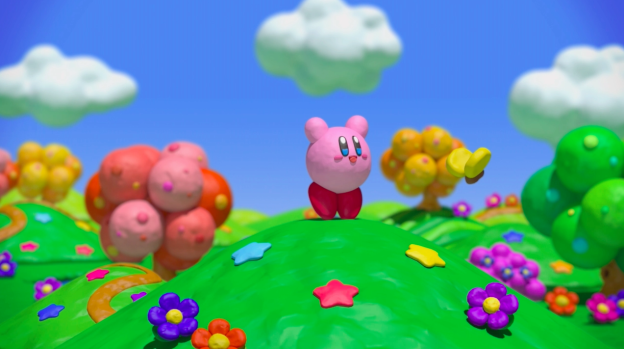 Right off the bat, Kirby’s new art style is a treat for the eyes. Thanks to the Wii U’s HD capability, the environments that you explore, and even Kirby and the enemies within them, all have the look and feel as if they have been molded by hand. Everything in the world of Rainbow Curse has texture thanks to smudges from fingerprints and the irregular shapes of mounds of clay. This gives the levels you explore a unique feel that really makes the objects around you pop out, and it is a joy to experience it in HD, something the 3DS wouldn’t be capable of. While there are few cut scenes in the game, they are done in a stop-motion animation style, and it only adds more charm to the game. 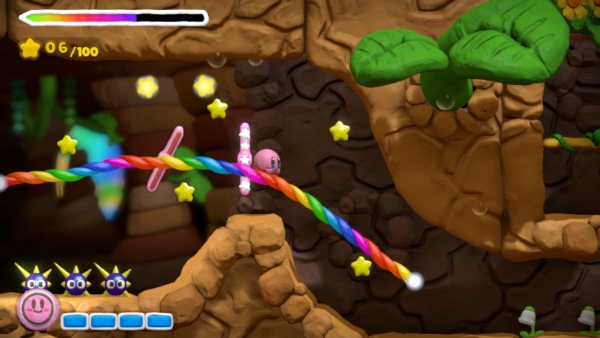 As far as music goes, Rainbow Curse has an excellent sound track that is perfectly suited to the action of each level you visit. Songs are mellow when the atmosphere of a level requires it, dramatic when the action gets intense, and more importantly, upbeat and fun, something Kirby game’s are known for. It’s clear that the developers took great care with all aspects of the game’s presentation. 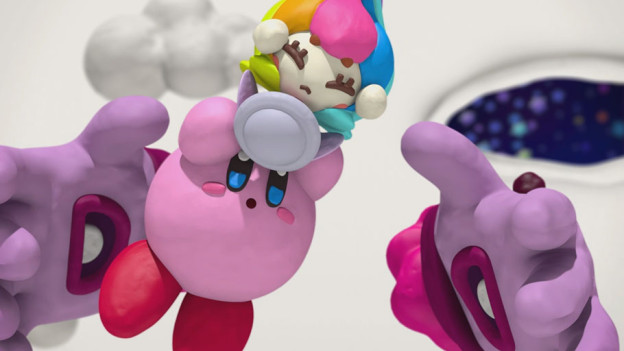 The Story to Rainbow Curse follows the very familiar Kirby formula. One day Kirby is lounging about on the planet Pop Star when an evil sorceress named Claycia invades the planet in her pursuit of a small sprite named Elline. Seeing her plight, Kirby and Waddle Dee rush to her aide and succeed in chasing Claycia off, but not before she has the chance steal all the color of Pop Star, which has the effect of turning its inhabitants into lifeless mounds of grey clay. Using Elline’s painting abilities to draw paths for Kirby and Waddle Dee, the trio head off to find out what is wrong with Claycia, and to restore life and color to Pop Star. While the story is nothing new or complex, the cut scene is wonderfully animated, and it’s quick and to the point, which brings you to the game play that much quicker. 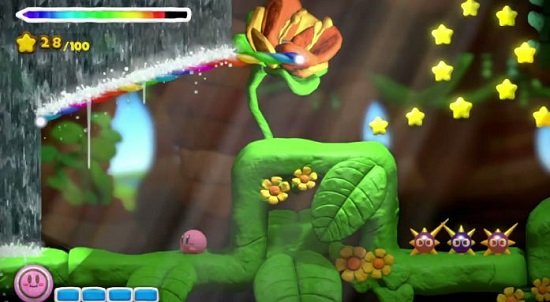 While Kirby and the Rainbow Curse may be a successor to Kirby Canvas Curse, the way the developers approached the mechanics and design of the levels is different than its DS counterpart. Sure, the drawing mechanics haven’t changed, as you still draw paths that move Kirby throughout the level, you still have a rechargeable meter that depletes as you draw, and tapping to dash makes a return; but Rainbow Curse has put more thought into how you can use the lines you draw to interact with Kirby and the environment differently. Early on, the first few worlds will present new challenges for you to figure out how to maneuver around before testing these newly honed skills in a later world. For example, one world’s level’s required me to use the lines I drew to keep waterfalls from crashing down on Kirby so that he could pass through, while an ocean themed world had me drawing my lines above Kirby rather than under him, so that he’d continue to travel underwater and wouldn’t float to the water’s surface. They may seem like insignificant variations, but changing the way you use the lines to traverse the worlds keeps the game fresh and spontaneous. 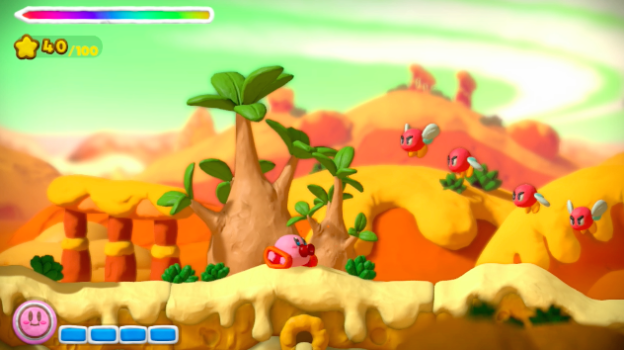 Instead of his copy ability, Kirby has three vehicle transformations that he can utilize in certain levels. Each one controls differently, and they are used to spice up the game play. As Tank Kirby, you tap the screen to fire projectiles to wherever you had touched on the screen. Tank Kirby is always moving at a sluggish pace, but it can be easy to be overwhelmed by swarms of enemies as you attempt to keep a path underneath the tank at the same time. Submarine Kirby constantly fires torpedoes, and you tap a location on the screen for him to move to. If you want to hit difficult targets, you’ll have to draw lines to guide your torpedoes to their target. Last but not least, Rocket Kirby flies at a quick pace destroying most obstacles in his way, and you must use your lines to ricochet Kirby into the right direction. The vehicle segments are lots of fun to play, and they do a great job of keeping the game from getting stale. 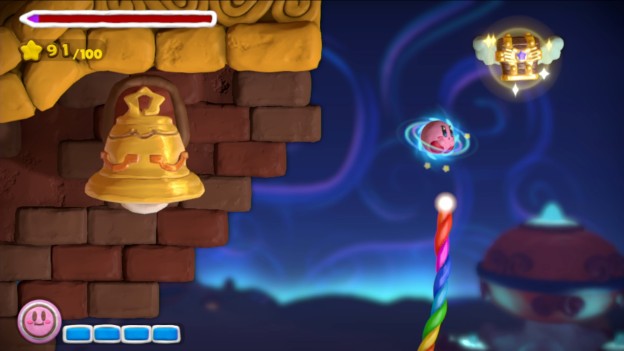 As you explore the different worlds of Rainbow Curse, each level is full of secrets for you to find. Finding hidden treasure chests unlocks music to listen to in the sound test room, and some even contain statues similar to Smash Bros., and it’s a nice reward for your vigilance as you get to view the models in detail while reading the fun descriptions about the characters in the game. Stars are also spread across the levels for you to collect. Gathering one hundred of them will give you a star dash ability that can break through certain blocks, and you’ll need this ability to get some of the treasure chests. It’s in your best interest to collect plenty of stars, as each level has a certain amount required to receive a gold medal for that level, and in return gold medals unlock new stages in the challenge room. While you could definitely breeze through the game easily enough, much of the challenge and fun comes from taking the time to explore the area around you to find everything. 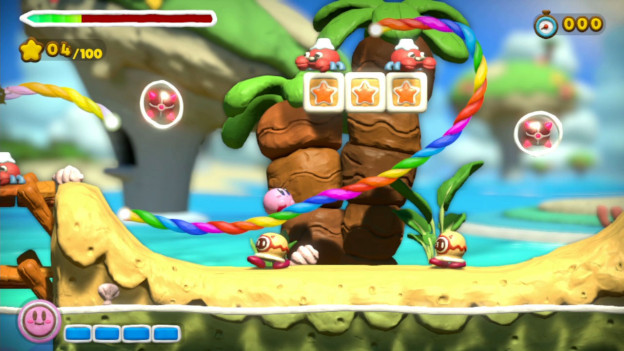 When it gets right down to it, Kirby and the Rainbow Curse is a step above its predecessor. Besides simply enjoying the game’s wonderful clay model art style and awesome music, the levels keep you on your toes with clever use of the line drawing mechanics, and the vehicle transformations keep things from getting dull. There are plenty of things to collect in each world, and viewing your unlocked statues and listening to music from a variety of Kirby games is plenty rewarding. I found the amiibo support to be pretty helpful, as Kirby’s amiibo gives you unlimited star dash, MetaKnight gives you a more powerful dash attack, and King Dedede will grant you two extra bars of health. You can only use them on one level once a day, however, so use them wisely. The challenge mode will have you solving environment puzzles under a time limit to collect treasure, and this is not only fun but helps add some replay value and length to the game.

This, unfortunately, is where the game has its biggest flaw. The story mode is incredibly short, with just seven worlds at four levels each if you include the boss battles. This means you could possibly beat the game in one sitting, however the time spent with the game is quality, and getting all the collectibles and beating all forty challenge levels should give you plenty of time with the game. Boss battles are also recycled from world four through six, which is something I found disappointing. While the bosses had different variations to them that made them tougher, I would have rather seen some different bosses, as Kirby has plenty of enemies he could face off against.

Despite these minor complaints, the game is absolutely fun to experience. If the idea of using calm and calculated brush strokes to explore some pretty open levels to find all of their secrets and unlockables sounds like fun to you, then definitely consider picking this game up. It may be a short adventure, but it proves that a Kirby game can be an artfully crafted experience.

The visuals and music are excellent, and the varied game play keeps you on your toes, but recycled bosses and a short story mode are disappointing.