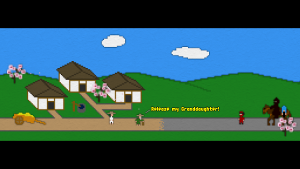 Can a simple peasant save the day?

Just two weeks after their Wii U debut, Nostatic Software is back on the eShop with Kung Fu FIGHT!  It’s a  fairly amusing martial arts themed runner, putting you in a rescue mission.  Being story driven (albeit minimally), the level design is set, yet there’s an element of randomness when it comes to enemy placement and such.  While the balance tends to be good more often than not, it can lead to some situations where hits are regrettably unavoidable. 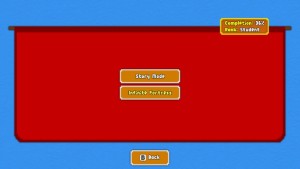 Besides the story mode, the game also includes something known as ‘Infinite Fortress’.  This is your endless level, but  sadly it brings no value to the package.  For inexplicable reasons it does not save your high score!  I wasn’t expecting online leaderboards, but having no score period is downright baffling.  At best it makes this a glorified training ground.  While both modes have three difficulty settings, I would’ve gladly traded one for proper scoring. 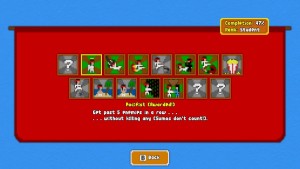 Trophies are fun, if you know what you’re working towards.

Perhaps in an effort to compensate for this, there are over a dozen trophies to unlock. This can provide some replay incentive, however the game doesn’t always tell you how each trophy can be earned.  So rather than focusing on a single objective, you may need to simply experiment and hope for the best.  It’s times like these where repetition can really start to grate on you. 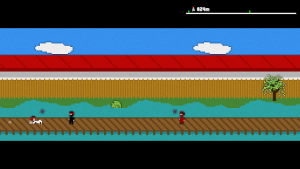 The game’s visual style of basic pixel art should make retro gamers feel at home.  I mainly played on the GamePad, as graphics such as these don’t demand an HD display. Everything runs smooth, which is absolutely essential for a quality runner.  There’s also a solid amount of variety in the backgrounds.  The variety fails to extend to the music however, as there’s only one main tune.  This did eventually impact my enjoyment, contributing to the repetitive feel.  I’d like to see Nostatic put more focus on music in future games. 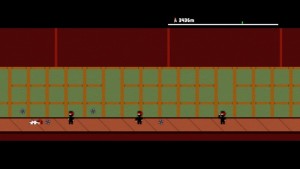 Difficult, but not always for the best reasons.

Another area where variety wants is enemies.  Though the different types suffice, the way they’re spread out doesn’t.  Some stretches see the same enemies repeat over and over (usually on higher difficulties) which makes for overly hard, dull level design, and leads to tedium.  At least the methods to deal with them are effective. Whether running, jumping, kicking, punching,sliding, or variants thereof, everything responds pretty well.  The only areas lacking with the controls are ways to customize them.  There’s no touchscreen options ala mobile, or way to assign the attack from the X to the B button for instance.

Although managing to put its own fun spin on the runner formula, the initial fun doesn’t last in Kung Fu FIGHT!  If you’re a fan of the genre looking for a small, inexpensive game, it’s still a worthwhile purchase at just $1.99.  For me though, deficiencies in proper scoring, enemy placement, music, and even the occasional glitch, are some of the things that lessen its addictiveness, bumping this game into average territory.  I suggest checking out The Quiet Collection (which has a mini version of this game) instead.

Kung Fu FIGHT! is certainly a mixed bag.  I’d like to see Nostatic Software polish and tighten the game, maybe bringing it to 3DS where it’d be a better fit.