When the temple of rabbits falls prey to an evil alien invasion, you are the only one who manages to escape!  Can you survive a dangerous rescue mission and triumph over evil?  Such is the plot of Kung Fu Rabbit, which sees its goofy tale advanced gradually through short and simple comic panels.  The game has humor, but can it back it up with strong gameplay?

One of Kung Fu Rabbit’s stronger aspects is its control.  Simple and responsive, it demonstrates yet again why gaming on the 3DS is far superior to mobile devices.  With its challenging platforming, I can imagine this game would get very frustrating relying on touch controls.  Thankfully it’s translated well to the button setup of the 3DS. 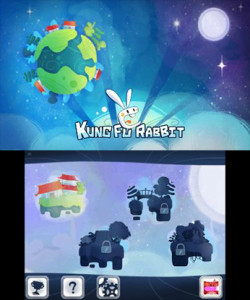 Another improvement comes from the use of powerups.  I was wondering why the game kept prompting me to get equipment from the dojo, even early on when powerups weren’t really needed or desired – come to find out these things were originally paid for.  Thankfully on 3DS you can acquire them through carrots you collect in the game, and not actual cash!  While I do think the repeated prompts no longer serve much purpose, I’m grateful that the original setup was pretty much axed entirely and that we aren’t required to use play coins or something.  Wise choice.

The powerups include single use items like check points, means to destroy multiple enemies, and obstacle eliminators.  Other items (artifacts) are permanent, and there are a handful that’ll make later levels (and replaying earlier ones) somewhat easier.  I’ve tried to avoid acquiring too many, but they’re available should you choose to take advantage of them.  Even if you don’t use carrots as currency, you’ll probably still want to collect them all.  While not necessary to be successful, it’s hard to pass up collectables.  Getting them all provides some motivation to replay levels you’ve already gone through. 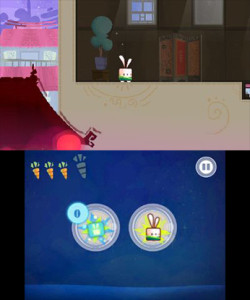 As an audio-visual package, I’ve found Kung Fu Rabbit to be a bit of a mixed bag.  The graphics themselves are fine (very colorful) but there aren’t any 3D enhancements at all.  This disappoints because if any game would benefit from 3D, it’s Kung Fu Rabbit!  The layered backdrops practically scream for 3D, and every time I fail trying to jump on a platform that’s in the background, or have my view obscured by foreground objects, I wonder why no effort was made to take advantage of the hardware.  The lower screen displays tips, but don’t be surprised if you see the same ones displayed multiple times in a row.  As far as the audio goes, there are some amusing sound effects to add humor.  The musical tracks are minimalist, and while they fit the atmosphere they tend to get repetitive – the short loop on most of them makes it stand out.  You can mute either or both however. 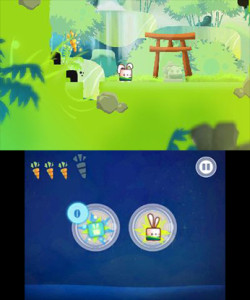 Overall Kung Fu Rabbit is okay, but a bit too basic.  Nothing in particular really stands out about it, except maybe the difficulty.  It hasn’t kept me glued to my 3DS like I first hoped.  I can see how it drew attention in the mobile market, but I think it’ll have a harder time doing so on the eShop.  The complete lack of 3D certainly does it no favors.  The game’s Miiverse functionally is broken as well, as it’s impossible to access it during the game!  It’s a well-known glitch (the freezing necessitates rebooting the 3DS) so hopefully it’ll be patched.  But with these issues, why play it on the 3DS when the Wii U version has been available for the same price?