Letter Challenge is a downloadable collection consisting of four individual word games.  Ideally this new DSiWare release could be a fun, low price way to pass the time.  Unfortunately the games are a decidedly mixed bag.

Wordblast – This is a Boggle style title, but the classic gameplay is bizarrely altered to disastrous results.  It’s not uncommon (in fact I’d say it’s routine) to see entire rows filled with the same letter!  There are 25 spaces in the grid, but  don’t be surprised if you have only 4 letters to work with at any given time.  In one game I played, I counted 12 of the same tile!  In another game the grid didn’t have even have one single consonant!   I’m not sure what determines which letters fall, but whatever it is, it must be almost broken.  I can’t imagine it’s done deliberately. You can reshuffle the grid to get new tiles, but this usually just results in either a new set of duplicate letters, or worse, the same letters just in different locations! This approach may add to the challenge, but ultimately it’s very annoying!  I’m truly at a loss what happened here, but obviously this is a pretty serious design flaw.  When you add in control issues (like poor diagonals) and the fact that the game actually gets easier the higher you set the difficulty (thanks to a wider assortment of letters and the always too generous timer) you have a seriously lacking game that only Boggle’s biggest fans would want to spend much time with.

Pickletter – In this game you’ll want to fill the grid with as many words as you can.  The game will display a single tile at a time which you can place anywhere within the grid (or skip if you don’t mind losing points)  Out of all the games, this is probably the one that’s most reliant on skill and strategy.  Even though I found it a bit on the easy side, it did grow on me.

Hangman – This is another seriously lacking game that should’ve had some more polish before being included in this collection.  For one, the game doesn’t even display a stick man or alternate diagram to represent progress or lack thereof.  Instead you have a small icon of a gold coin in the corner, and the number next to it will drop with each failed guess.

The biggest weakness with hangman though is the amount of repeated words.  I started getting identical words as soon as my second game.  Yes that’s right, my second game!  For an “updated version” that boasts over 100,000 words, the sheer amount of duplicate words is mystifying.  Once again, I’m at a loss, and once again I advise steering clear for all but the most ardent hangman enthusiasts.

Wordfinder – This game reminds me of the television show Lingo.  You need to guess the correct amount of words before time expires.  Tiles you pick will show up in different colors which indicate one of three things – the letter isn’t in the word, the letter is in the word but in the wrong spot, or the letter is correctly placed.  Not only do the amount of words you need to find increase with higher difficulty settings, but their length does as well.  Four letter words will give way to five and six letter ones, which helps keep things fresh.  It’s a satisfying game, and might be my favorite in this collection While the games clearly vary in quality, they are all wrapped together in a decent enough package.  You can select from a few different themes, which will change the background graphics as well as the accompanying music tracks. The music didn’t really get on my nerves,  and a couple of the tunes might have even been a bit catchy.

You’ll quickly earn medals which unlock trophies, and the trophy menu actually lists what is needed to unlock each one.  Playing with a goal in mind is nice … although once you get all the medals and the trophy is complete, there is no way of seeing what it is you’ve earned.  It’ll just say “Trophy completed…”  Experience points are also earned, which fill up the experience bar to unlock the next level.  This is a nice incentive that might keep you playing longer than expected, especially since the process isn’t a quick one.

Other features include having three individual profiles, allowing friends or family to have their own games going off the same download.  Options to change the difficulty settings (which reduce the timer and raise your objectives) are always welcome too, and you’ll definitely want to see the challenge increase from the lower settings which are much too easy. 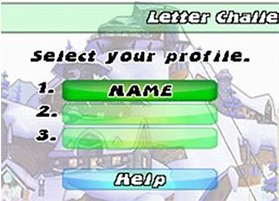 Overall Letter Challenge offers a very uneven experience.  But with two of the four games having such serious design flaws (not to mention that I twice encountered game freezing glitches!) I can’t really give it a recommendation.  Having said that, Letter Challenge still has a couple of solid games worth sinking some time into, and it does just enough right that I can bump it to an average grade (especially with the low price)  It doesn’t give the best first impression, but fans of word games may find enough here to warrant a look.  Everyone else can probably take a pass, and wait for a 3DS update with more consistent design and additional content.