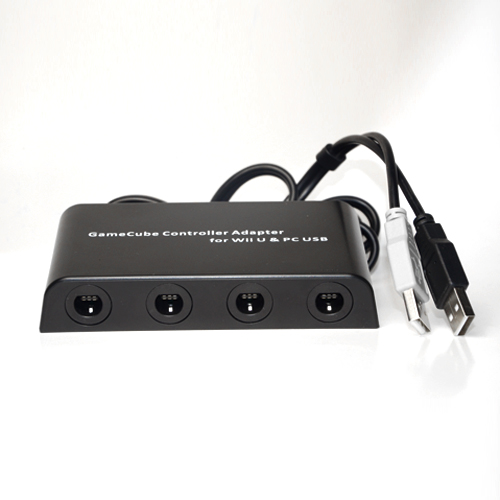 Two gear reviews in one day?  No, it’s not Christmas, or I guess it’s Christmas in July? :)  We just took a look at the Mayflash Wii U Pro Controller adapter for PC and now we are looking at an adapter you may already own.  When Smash Bros. for Wii U came out last year, Nintendo announced an official GameCube controller adapter.  Many fans, myself included, were stoked.  Unfortunately, the adapter was so poorly stocked that most fans never found one or paid too much for one.  Well, I have a solution for you that’s probably cheaper and you get more bang for your buck.  Let’s take a look at the Mayflash GameCube Controller adapter.

Starting off with the setup….oh, there is none, you just plug it in and play!  It’s really that simple.  I booted up Smash Bros. for Wii U, plugged in the adapter’s 2 USB cables to the Wii U, and I was gaming away using my Wavebird controller.  Now, we all know the Wavebird doesn’t have rumble support, but I tried a regular GameCube controller and it fully supports rumble as well.  One of the added benefits of the Mayflash GameCube adapter is the ability to plug it into your PC as well.  There is a physical switch on the back of the adapter that allows you to toggle PC mode or Wii U mode.  The PC setup requires players to download drivers initially to get rumble support, but other than that, it’s plug and play.

As far as the build quality is concerned, the adapter does feel a bit lighter and generally ‘cheaper feeling’ than the official one.  It’s also a little wider in footprint, but overall it is very good quality.  The adapter can be used in conjunction with the official adapter for 8-player smashes or with another Mayflash adapter.

All in all, the Mayflash GameCube Controller adapter is a really great option if you haven’t been able to find the official adapter, or if you want to pick up another one to do 8-player smashes and have 8 GameCube controllers lying around.

If you’d like more setup information or information about the adapter, check it out at the link below.

All in all, the Mayflash GameCube Controller adapter is a really great option if you haven’t been able to find the official adapter, or if you want to pick up another one to do 8-player smashes and have 8 GameCube controllers lying around.