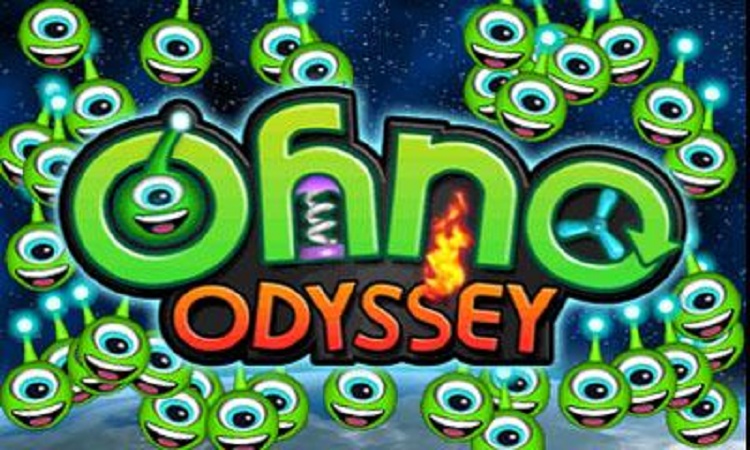 When an accident results in a spilled drink damaging their mothership, the alien Ohnos find themselves stranded on Earth.  Outside of their space suits, the Ohnos can only move about by rolling.  It’s the player’s responsibility to guide each one past a variety of obstacles so they can successfully roll into the escape pod’s tractor beam, and blast back home. 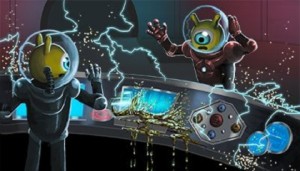 You’re given a variety of tools for the task at hand, and new ones are introduced at a good rate.  Balloons and sandbags will affect gravity, hot peppers and mud blobs will speed up or slow down an Ohno respectively, ramps and springs are used for jumping, strategically placed bumpers can bounce an Ohno in every direction, etc.  I could go on, but suffice to say there’s lots of tools at your disposal that you can use in all sorts of clever ways.  They’re all mapped to the touch screen well, and it’s a handy setup.  The control overall is good, and takes advantage of the 3DS.  I’ve found it quick and, for the most part, pretty easy. 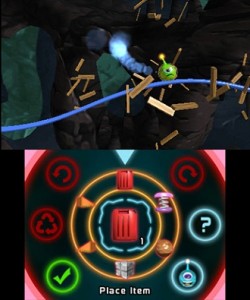 The game gives you all the time you need to try and finish a level successfully and, coupled with unlimited attempts, you’ll have free reign to try as many combinations as possible.  I really appreciate this, as it encourages creativity.  Completing a level in various ways is very satisfying, and some of the strangest combos end up working out.  The less items you use to complete a level the better, as the game keeps track of it.  This gives the game some replayability.  The game isn’t easy mind you (especially with limits on the number of tools) but it doesn’t frustrate.

Visually this title is a success.  Its presentation is done well, and the various settings that include city skyscrapers, snowy mountains, and a lush jungle, among others, offer plenty of diversity, and have a colorful and enjoyable art style.  They work well with the 3D activated and I’ve found I really missed it when I switched back to 2D.  The Ohnos are cute, and nicely manage to display a good amount of personality simply through their facial expressions and occasional speech.  Hearing an “Oh no!” yelled in a Lemming type voice as your guided alien tumbles into the void, makes you care about the little critters and helps give the game a ‘one more time’ mentality. 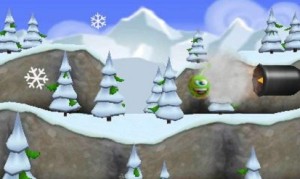 On the musical end, things don’t fare quite as well.  While the included tunes are fine and never detract, there’s unfortunately not a great deal of variety.  The repetitive tracks can’t quite match the high quality of the rest of the game.

If I had to come up with one word to sum up Ohno Odyssey, I’d say it’s pleasant.  It isn’t the longest game, but what’s there is great fun, making this a title that deserves to find success on the eShop.  I could probably mention where the game could use a nip here or a tuck there if I tried, but there’s really nothing too serious.  The fun easily outweighs any shortcomings the game has.  I really hope to see more of the Ohnos in the future!  A sequel with more content, even more replay value, and a rousing musical score could become a classic.