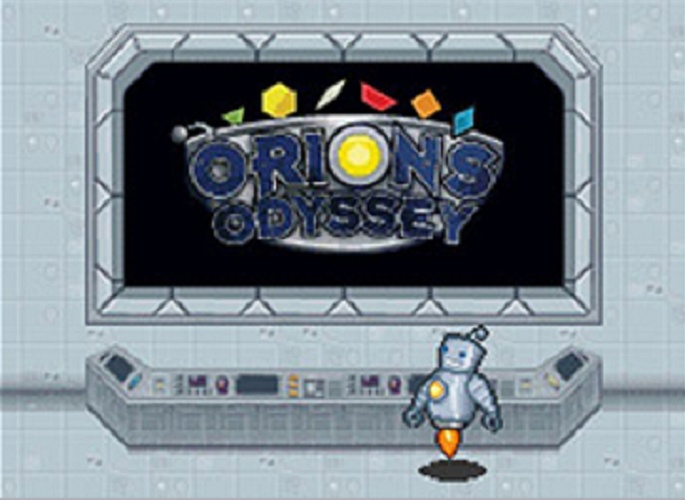 To determine if Kickstarter success Orion’s Odyssey: A Pattern Blocks Adventure is for you, consider the following questions – Are you in the market for a great game?  Would you like a download that’s easy on the wallet?  Does the idea of software that will entertain both kids and adults sound good to you?  Orion’s Odyssey is all of these things, and more!

As a backer on this project, I had some pretty high hopes for its release.  Thankfully it has not disappointed.  While I rightfully expected a good game, I’ve been surprised by just how much the story elements add to it.  Turns out the combination of puzzles and adventure makes for a very good mix. 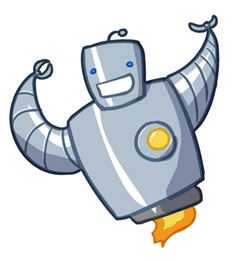 The game stars Orion, originally from the space level of the games predecessor, Hands On! Tangrams.  A clever but isolated and lonely robot, Orion is seeking some companionship.  Leaving the darkness of space for Earth, Orion will end up not only making friends (including eventual sidekick young Ryan) but also fixing all sorts of crazy situations thanks to his unique abilities.  These abilities come to life via pattern blocks, as each of the puzzles transform into helpful objects.  While some objects are basic, it’s the over the top ones that are the most fun and memorable.  From the world’s largest refrigerator that requires so much energy you’ll need to unplug it if the sun starts to dim, to a robotic scorpion built solely to make passage past mad scientist Dr. Watts monstrous Kraken possible, there’s plenty of crazy objects that add to the humor so prevalent in the game!  The actual puzzle mechanic will be a familiar one to those who played the games predecessor, yet it’s much better overall. 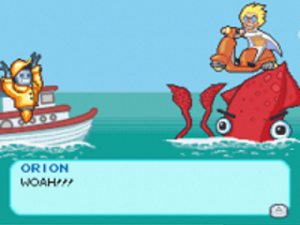 Pattern blocks, while comparable to tangrams, seem to allow for a great deal more variety in how a puzzle can be solved.  While solutions are limited with tangrams, the sky’s the limit so to speak with pattern blocks.  This flexibility is demonstrated when you tackle the puzzles which limit the number of pieces you have to work with, or in other cases, those which forbid the use of certain pieces all together.  There’s plenty of opportunity to experiment, and with each piece being assigned its own value, lots of ways to increase your points.

The adventure portion took me about four hours to beat, and with its humorous and generally uplifting story, wide variety of colorful characters, and good mix of locations, it felt very well-developed and charming.  It is sweet enough for young kids, but with humor that adults will appreciate. There is plenty more to look forward to though.  Free play will let you choose individual puzzles after they’re unlocked during the adventure.  Whether you replay your favorites just for fun, play all of them to try different combinations, or are just looking to increase your score, you’ll continue to earn points.  And points are important because of the store. 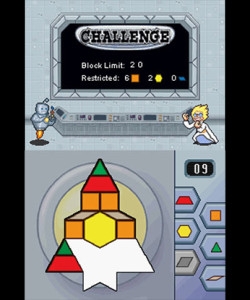 The store (Paul Buckley’s junkyard shop) is where you can use your points towards unlocking all sorts of goodies – production artwork, character biographies (which also let you view all the well done animations), tracks for the music gallery, and even new game modes!  This is another element that adds to the game’s replay value, as you’ll want unlock everything.  I was originally hoping to not post this review until I unlocked all there is, but I think that may be a long while still.  The reason?  Challenge mode!

When unlocked, Challenge mode will introduce not just the limitations mentioned earlier to make puzzles harder, but even new puzzles all together!  This mode is described for “hardcore puzzle aficionados”, and I must say that description seems pretty spot on to me.  While the Adventure mode is fairly easy, I’ve only beaten a fraction of these challenge puzzles thus far, which means more unlockables to look forward to, and plenty of game left to play.  For those that put a premium on difficulty, this is a great addition, and the extra content impresses. 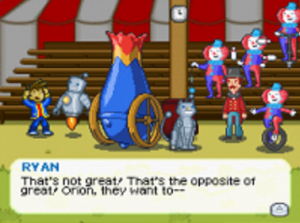 If you enjoy sprite work as much as  I do, then Orion’s Odyssey is sure to bring a smile to your face.  All of the characters personalities come across beautifully on the handheld screen (there are dozens of them!) and the numerous animations (a huge improvement over its predecessor) are a real treat to watch.  Though somewhat lacking in vibrancy, the game is plenty colorful, and the various locations allow for a wide diversity of artwork.  My favorite of the early sections might be the murky depths of Atlantis, with its crumbling architecture, fallen statues, and mermaid population.  There’s some even better surprises towards the end, but I won’t spoil them.  Overall it is a visual package that shows off some creative muscle, and I’m very pleased with how everything turned out.

Musically, Orion’s Odyssey carries on the high standards set by Hands On! Tangrams.  From the new compositions, to remixed tunes of my favorite tracks, these are quality compositions and all fit their respective locations well.  The end track in particular (listen to it in the above trailer) is quite awesome, and being able to listen to each song separately is a great addition – kudos!  And I don’t want to forget to mention the sound effects either, which are almost as good – the speech especially (though limited) is a very nice addition, with Orion’s voice being of special note, standing out in a positive way. 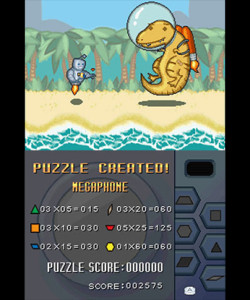 I’m grateful for Kickstarter, otherwise I might not have been able to ever play this game.  The core experience is terrific, the replay value is high, the appeal is far-reaching, the extras are great, and it has a level of polish that everyone can appreciate.  While not every Kickstarter game lives up to potential, this one certainly did.  Not only is Orion’s Odyssey the best DSiWare game of 2013, but I honestly think it can stand alongside the best the service has ever offered.

I don’t care if you stopped  buying DSiWare titles ages ago, or need to dump a game or two onto your SD card to make room in the system memory, download this game!  The ending hints at a sequel – let’s make it a reality.  I’d love to see more of Orion on the 3DS or Wii U.  He’s one of the most upbeat and humorous characters I’ve seen in recent memory,