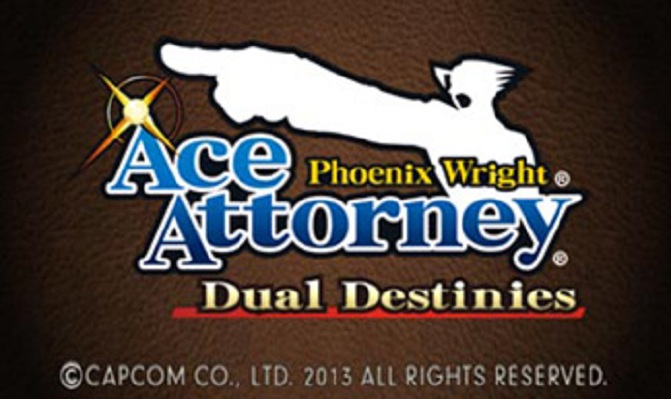 The Ace Attorney series returns to Nintendo hardware!  With a string of hits on the Game Boy Advance, DS, and WiiWare, the series looks to continue pleasing its many fans, while hopefully attracting new ones in the process.  If Phoenix Wright: Ace Attorney – Dual Destinies is any indication, I think Capcom is on the right track for continued success.

Even though I haven’t played a Phoenix Wright game since ‘Trials and Tribulations’, it didn’t take me long to get into Dual Destinies.  The game has a familiar, comfortable feel, and it’s been just as nice seeing old faces as it’s been meeting new ones.  The move to 3DS has obviously helped, with crisp visuals and fine 3D enhancing the game without abandoning what made the series a critical and financial success prior.  I was quickly reminded why I enjoy the genre, and excited to return to more quasi legal adventures! 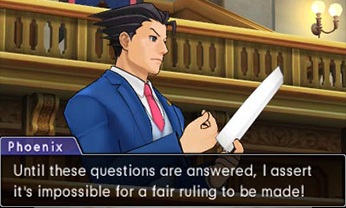 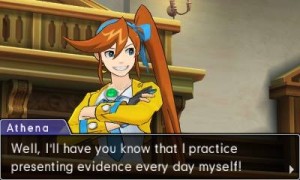 Fresh faced Athena Cykes is a new lawyer joining Phoenix, Apollo, and a cast of familiar favorites.  Like the prior leads, she has her own unique gifts that aid her in the pursuit of justice.  As a psychology buff, she can pick up on subtle emotions, and she wears a computerized necklace to help her in this regard.  I think she fits in very well with her contemporaries, while managing to have her own unique style.  Spunky, spry, and instantly likeable, she is a key figure throughout much of the game, and a fun character to have on hand.  But really all the characters, from those in key parts (like new prosecutor Blackwell) to the more minor roles share with Athena in well-developed characterization.  A memorable cast all around! 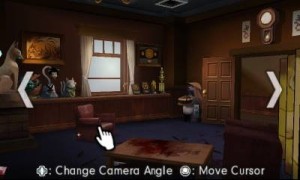 The game’s art style takes good advantage of its move to new hardware.   With the 3D activated, characters really pop off the screen, and their exaggerated animations are quite enjoyable to watch.  The ability to pan around locations under investigation is another welcome change, adding to the enjoyment of pointing and clicking.  And it isn’t just the visuals that impress with improvements, as the audio benefits too.  A superior soundtrack and (most notably) voice activated cut scenes are a real treat, breaking up what is a very text heavy game.  Which isn’t to say the text is bad, quite the contrary actually, it runs the gamut from good to excellent!

As a visual novel primarily (and a long one at that) it’s a good thing that Dual Destinies excels in story, presenting a narrative over the course of multiple episodes that could most certainly be classified as a ‘page turner’.  The gripping tales will grab you from the get go, and keep you glued to your 3DS!  It’s an effort not to reveal spoilers, but a more cryptic review is worth first hand discovery.  Suffice to say, there are some great surprises to look forward to!  This is a well written title, expertly managing to balance its serious nature with plenty of goofy charm, without going over the top.  Speaking of which … 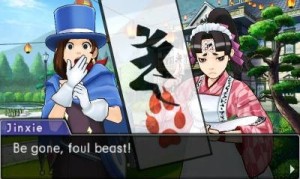 Dual Destinies has a Mature rating, a fact which came as a big surprise to me when I first learned of it, as all previous games in the series had been rated Teen.  After playing through the game, my surprise still remains … the game is inexplicably rated M for reasons I’m not entirely clear on.  The theme is serious of course (the first episode opens with a courtroom exploding!) but there is really nothing gratuitous.  The overall presentation, wacky characters (especially those making their debut) and plenty of humor conflict with the rating.  It’s hard to take a Mature rating seriously when a murder case has more in common with an episode of Scooby Doo than an R rated flick!   I’ve seen the ESRB be too lax in the past with some ratings, but I can’t really recall a situation like this, where they went to the other extreme. I feel the ESRB dropped the ball on this one, and I join with a slew of other critics who have properly been calling the organization out for this mistake.

As the series’ 3DS debut, Dual Destinies is impressive, and makes a good launching point for those unfamiliar with prior titles to see what they’ve been missing.  As someone who has played the previous entries only sporadically, I’ve been able to fully enjoy the game without feeling lost.  In fact it’s made me want to check out the titles I’ve missed, and I wouldn’t be surprised if it had the same effect on others; whether this is their first visit to the Ace Attorney universe, or they are looking to have their interest rekindled like me.  Hardcore fans of course will enjoy the elements they’ve grown to love, while embracing the new ones.

Hopefully this game will be successful enough that Capcom will release the next entry as a physical release, which this game certainly deserved.  But don’t let its disappointing download only status (or plethora of typos) discourage you … Dual Destinies is well worth your time and money!