While the pinball purist in me has been spoiled in recent years, with digital versions of the beloved pastime comparing favorably with its arcade counterparts, I’ll always have a soft spot for classic video pinball.  And that’s what I consider Revenge of the Gator to be, especially considering the hardware it was originally released for.  As a Game Boy title, and a very early one at that, (1989) it nailed down the basics without being too overly ambitious for the handheld.  In many ways I think it’s even better than Hal’s later, and more well known pinball effort, Kirby’s Pinball land.

Of course the design is dated.  Many of the bells and whistles we take for granted now (like nudging, multiballs, etc…) are absent here.  And this virtual console incarnation, with its multiplayer options not optimized for 3DS (no match play modes) means there is even less content here than there was in 1989.  But that’s not overly important.  What is important is that Revenge of the Gator is a fun, well designed pinball game that still manages to entertain all these years later, with the added benefit of retro charm. 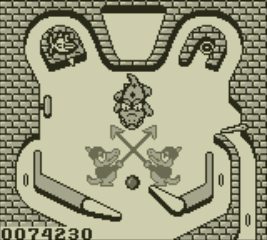 If you’ve played NES Pinball (and if not, download it on the VC) this game will have a familiar and comfortable feel for you.  It has a long vertical table with each section given its own screen (no scrolling between them) and there are also some fun bonus sections as well.  One area where this game manages to surpass the NES classic is in theme.  Rather than just a bunch of random targets, the gator theme is well displayed here.  There are plenty of the creatures populating each screen of the table, making this a game that’s aptly named.  It’s a fairly entertaining setup, and one that’s fun to look at.  This leads us to the games visuals …

The graphic package needs to be taken in the context of its time.  This was originally a Game Boy game from 1989 after all, so you probably already know what to expect (if not, make sure your expectations are modest)  At least the visuals don’t blur on the 3DS.  The lengthy table has a solid amount of targets and the like to keep you occupied, and the animations (though sparse and simple) are appreciated in lieu of a static playfield.  And of course, the gators are just plain fun! 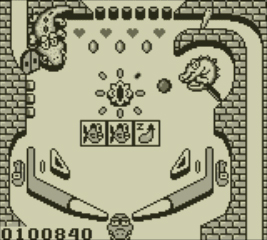 On the audio end, there are a few music tracks.  They’re all pleasant, and compare favorably with the best of Game Boy music during those early days.  Considering many GB games had only one music track (or played in silence) Gator’s varied selections are a real treat.  I like the tunes, and think they complement the action well.  No need to mute this one.

Revenge of the Gator simply plays well.  The physics were quite good for the time, and it felt like you truly had control with aiming and such.  It’s targets are nicely varied, and when you factor in a number of different bonus sections, the table is a very good size.  It’s the sort of game that can easily eat up more time than you expected, as you’ll want to try one more game to best your high score(s). 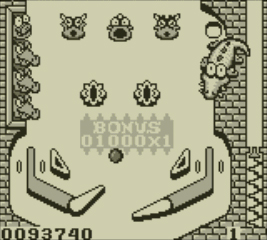 Speaking of which, even though you play for a high score (as is the case with nearly every pinball game) the score will reset every time you turn the game off.  The original GB cart lacked battery backup, and this is straight VC emulation with no save added.  However, if you can remember to create a restore point between games your scores will carry over.

Revenge of the ‘Gator is an oldie but goodie for fans of video pinball.  If you are one, definitely give this game a look … it’s worth it, even if you don’t have memories of the original.  And at a good price of only $2.99, others may want to check it out as well.  For quick and accessible fun with strong replay value, Revenge of the Gator still manages to impress all these years later.