This new eShop release is a strategic puzzle game in the match-three mold.  Titles of this style are proven fun, but at this point for me to really enjoy them something unique should be present.  In the case of Pokémon Battle Trozei (Pokémon Link: Battle! elsewhere) the unique aspect comes mainly from the Pokémon and how they’re used. 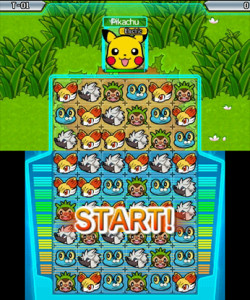 All 700 plus are present, from the Game Boy debuts through X/Y.  Wild Pokémon appear and matches of three or more lead to them being captured.   Ideally the wild Pokémon are countered by matching a Pokémon type they’re weaker against.  As the game progresses you’ll find knowledge of the series very useful – the game can be difficult for those who haven’t followed it quite closely.  Tutorials are helpful, but they can only do so much if you don’t know the strengths and weakness of hundreds of Pokémon.

Another unique aspect comes from the control setup.  Most games like this have you sliding nearby icons, but here you can pick up and move them around from anywhere in the play field.  I had to keep reminding myself of this initially –   It does give the game a different feel.  Ultimately however it doesn’t shake up the formula all that much, even though it’s done well. 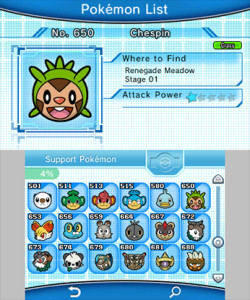 Multiplayer’s included, but it’s local only and each person must have their own copy of the game.  The lack of online could be a huge disappointment to many, and understandably so.  Other potential disappointments could be the complete absence of 3D, and having only a single profile.  The latter is of particular concern to me, especially when the game’s currently selling for $7.99 – at that price, at least two profiles should be expected, considering cheaper games of this style often give you multiple.

I’m all for spinoffs, but the reality is if you haven’t played every Pokémon title (or feel like you’re outgrowing them) this might not be a download for you.  It’s a repetitive game that doesn’t go far enough with its gameplay to make it really emerge.  In a market with lots of match-three choices (often at budget prices) I’m not sure there’s enough long-term content here, unless you want to fill up your Pokémon list.  It’s possible I’m just reaching my fill of titles like this, but I wonder how large an audience this game will find when it’s targeting a narrowly defined one to begin with – those that are huge fans of both Pokémon and match-3 games. 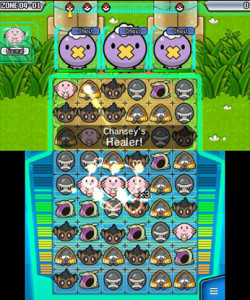 However it must be acknowledged that match-three games are fun and this one’s no exception.  It is enjoyable getting combos, and the wild Pokémon that can drop down into the actual play field (box) keeps you on your toes.  The ranking system prompts replayability – C’s really sticks out like sore thumbs.  Unlockable stages offer additional incentive.

If you love all things Pokémon you’ll definitly want this game for completions sake – but it seems like a slight license squander to me.  Nevertheless I suspect the name will carry weight, making this solid (but unspectacular) download seem better than it is.  Even big fans will likely acknowledge more could’ve been done here, but Pokémon Battle Trozei is fun in spurts.