If you enjoyed Quell: Reflect (and I certainly did) you’ll enjoy Quell: Memento.  This puzzle game sticks with what works for the most part, while adding a few welcomed touches.  It’s a fun eShop download that’s easy to lose time with.

Your objectives are the same as before – maneuver water droplets (that can’t change direction while moving) to collect pearls.  It’s familiar to returning players, yet intuitive for new ones.  A prologue tutorial eliminates any potential confusion.  The mechanics and objectives have expanded beyond the first game.  Not everything is a winner (some additions are more tedious) but greater diversity is appreciated, and everything meshes well together more often than not.  Some of my personal favorite puzzles are those centered around illumination.  It also makes for a more challenging title.  It does run slightly contrary to the more relaxed format laid by its predecessor, but it also means the difficulty ramps at a superior pace. 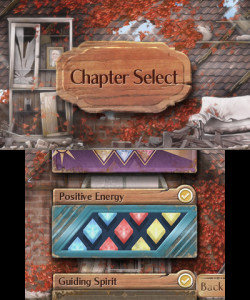 A unique setting has been retained, with an older house as the game’s central locale, and window panes for the gameplay.  Some light dialogue (fully voiced) shed some insight into the atmosphere, and this is an appropriate improvement.  Another improvement is the way the chapters are organized.  Each of them has themed names.  ‘A Cold Heart’ for example displays an ice cube tray, and all the puzzles revolve around ice.  No more cryptic or meaningless descriptors.  With nine total, Memento has more chapters than Reflect’s seven, but still comes up short in terms of total pearls to collect.

A high quality audio package really adds to this title.  The various relaxing music compositions enhance the gameplay, helping to keep frustration at bay.  My one audio regret is that rain sound effects (included in the first game) have been cut.  Graphically this is a basic looking game, but the visuals are fitting for a puzzler.  Unfortunately it has taken a sizable step backwards when it comes to the top screen.    No longer animated and changing picturesque scenery, it’s now wasted primarily with a display of the level select screen! This misguided choice is baffling, and I can’t imagine why it was made. 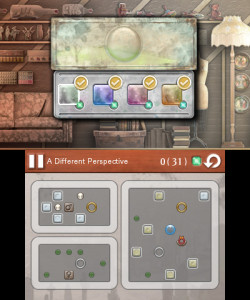 Replay incentives from the first game have returned.  Perfect move level completion, secret jewels, etc. Achievements are back as well, although there is less in Memento than there were in Reflect.  New to this installment are secret timekeeper levels, which are tucked away in certain levels and accessed via hidden red portal rings.  There’s a lot to keep you coming back to the game!

Quell: Memento is a worthy follow up with a few welcome improvements.  I hope the next installment in this puzzle series will return those elements cut, while continuing to progress in other avenues.  I recommend both games, but do suggest you check out Quell: Reflect first.  At just $3.99 each, it’s easy to get both!

Quell: Memento is a worthy follow up with a few welcome improvements.  I hope the next installment in the puzzle series will return those elements cut, while continuing to progress in other avenues.